Yes, People Were Totally Willing to Get a Free Duke's Mayo Tattoo

Dozens of people showed up to a Richmond tattoo shop for Duke's-related ink.

You might not think that there's a lot of competition for the title of "Most Tattooed Brand of Mayonnaise," but Duke's isn't taking any chances. In order to build its lead over … whatever the second-most tattooed brand of mayonnaise is, it partnered with a tattoo shop near its Richmond, Virginia headquarters to offer free Duke's themed-ink last Friday.

Duke's previously announced the Friday the 13th event on Instagram, and Yellow Bird Tattoo filled those free tat spots in just over an hour. (They also received over 1,000 requests for the waitlist — and so many people tried to put their names down, Yellow Bird had to bring in a extra receptionist.) But by the time the artists turned off their tattoo guns and called it a day on Friday, almost 70 people had been inked with one of the free Duke's-related designs.

According to NBC12, one customer drove five hours from Tennessee to the Virginia capital to get fully Duke'd. "I love mayonnaise and all my buddies hate mayonnaise and that was enough for me," Kayne Hughes told the station, before adding that he got a free jar of mayo to go with his new body art.

The rules for the event were simple: participants could only choose one of roughly 40 different Duke's designs, it had to be placed on either an arm or a leg, and the size of the tattoos couldn't be altered from how they were drawn on the flash sheet. (A flash sheet is a collection of pre-drawn tattoos that a shop's artists can do without any modifications.)

In keeping with Yellow Bird's aesthetic, all the Duke's work was done in the traditional style of tattooing, and the designs included a Grim Reaper with a jar of Duke's for a face; a snail with a jar of Duke's instead of a shell; or the words "Death Before Hellmann's" written on a scroll in front of a table knife. "We tried to push the envelope while honoring the bold, southern, and fun spirit of Duke's," Yellow Bird owner Joseph Fessman said.

"We're a passion brand. We're a cult brand," Duke's Brand Manager Rebecca Lupesco told WTVR. "It's more than just the mayonnaise. It's really how we, you know, have fit into their lives."

And, thanks to several dozen enthusiastic Duke lovers, they're even closer to that "most tattooed brand of mayo" thing, too. 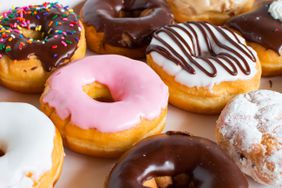