Sports and marketing used to stay relatively separate. The White Sox played at Comiskey Park. College football games had names like the Hall of Fame Bowl. Soccer teams were not named after energy drinks. But things have changed. The White Sox play at Guaranteed Rate Field. Tampa now hosts the ReliaQuest Bowl. And the Red Bulls play their Major League Soccer games at Red Bull Arena.

It all might be a bit ridiculous, but if that's how it's going to be, why not embrace it? In 2020, South Carolina-based Duke's Mayonnaise began sponsoring the annual opening weekend college football game in Charlotte, which is now known as the Duke's Mayo Classic. And what's a football game without a mascot? So this week, Duke's has unveiled a mascot of their own… Tubby.

Billed as the first mascot in the brand's 105-year history, Tubby was, uh, certainly worth the wait. Duke's says the mascot was designed for "personifying Duke's Twang!" which is why he has "shifty eyes and shaggy brows" to go with his "saucy personality."

"Tubby, the mascot, is one more way Duke's continues to shake up the condiment category and connect with its customers," Rebecca Lupesco, Duke's "brand manager of mayohem," said in announcing the new mascot. "We're the rebels in an all too traditional category, and we've given ourselves permission to have some fun with this character who is passionate, curious, and a little unhinged."

The sports world has certainly taken notice. Depending on which blog you head to, you'll find descriptions including "disturbing," "only slightly horrifying," and "something straight out of a nightmare." Clearly the eyes are intended to be unsettling, but it's actually more unpleasant when you finally notice Tubby doesn't have a mouth.

"Tubby is bold and not afraid to express himself," Lupesco continued, as if she realized more had to be said. "He's actually quite charming — I can't wait to see what he does next."

Just to clarify, what he did previously was take over the Duke's Mayo Twitter account on August 25 where he did things like tweet, "I LURB MAYONNAISE YES I DO. I LURB MAYONNAIZE HBU?" and post a video of him turning a lamp off and on again with the caption "MADE A FREN." 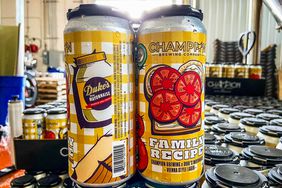 This Beer Was Brewed to Pair Perfectly with Mayonnaise