Fair Food Is Pivoting to Drive-Thru This Summer

Even a pandemic won't keep people from eating funnel cake.

As far as PPE is concerned, a car is bulky and expensive, but it certainly keeps you apart from other people—a fact event organizers are taking advantage of. Drive-in movies are having a resurgence, and some artists have tried drive-in concerts. We've seen drive-thru farmers markets and even drive-true beer festivals. (You drink when you get home.) But none of these are ideal for getting a deep-fried Twinkie, so meet America's new car-accentuated obsession: drive-thru fairs.

From New York to California and everywhere in between, car-accessible fair food events are already ramping up to be the hit of the coronavirus-impacted summer. Syracuse.com reports that its region now has two drive-thru fair food fests. After a series of successful events from the fried dough specialists at Villa Pizze Fritte, a group called Carnival Eats Syracuse announced its own event for at least the next two weekends featuring a range of classics like deep-fried Oreos, corn dogs, and funnel cakes.

And on America's opposite coast, the Big Fresno Fair has brought the same concept to California and will continue to run every weekend this month, according to The Business Journal. Just enter through the Carnival Lot (Gate 6). This past weekend featured taco trios, kettle corn, and even margaritas.

Heck, while you're already in your car, it's less than an hour south to the Tulare County Fairgrounds. That venue just held a drive-thru fair with plans to do it again this weekend. Or take an hour drive north up to Merced County: Yup, they're doing the same thing. "We wanted to bring something positive to the fairgrounds and give the community something fun to do while still aligning with the pandemic guidelines," 2020 Merced County Fair CEO Teresa Burrola told the Merced Sun-Star. "It has definitely put a smile on people's faces and our food vendors could not be more thankful for the support. We look forward to continuing our 'Fair Food Fridays' throughout the month and into June."

In fact, if you're used to visiting a fair in your area—state, county or otherwise—it's probably worth looking into whether they have a drive-thru edition up and running... or if they plan on launching one. Drive-thru fairs have happened or are happening in Missouri, Florida, and Ohio just to name a few. And Memorial Day is still nearly two weeks away. As word of this trend begins to spread—and if the events prove to be as popular as they've apparently been—expect this to be the summer of drive-thru fairs.

If this keeps up, can a drive-thru renaissance fair be far behind? Who wouldn't want to eat a full turkey leg, dressed in a Victorian gown, behind the wheel of a Honda Fit? 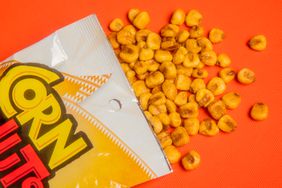