Oat Milk Beer? Dogfish Head Is Bringing It to the Masses

Even casual beer fans have likely noticed India pale ales are more opaque than they used to be. Hazy IPAs—also known as New England-style IPAs—have been the biggest trend in beer over the past decade. Part of their signature cloudiness stems from the use of malts beyond barley—usually wheat or oats—making oats an unsung hero of many recent craft beers. Of course, oats also have other uses, including another super-trendy beverage made with the cereal: oat milk. Oat milk sales have surged alongside the plant-based boom, practically turning into an American obsession.

Dots can be already connected between these two liquids as the always innovative craft beer industry has experimented with using oat milk in hazy beers. However, Delaware's Dogfish Head Brewery is about to take oat milk beer mainstream, adding it to their year-round lineup and releasing it nationwide next year: Say hello to Hazy-O!—an oat milk-centric, hazy IPA.

"Oat milk is definitely having a zeitgeist moment right now in the culinary world," Dogfish Head founder Sam Calagione told me. "Sales of hard seltzers—the fastest-growing alcohol sector—are up low triple digits, year-to-date. Sales of oat milk are up almost 1,000-percent this year. I read somewhere that the growth percentage of oat milk even eclipses that of hand sanitizer this year."

But though Hazy-O! hopes to benefit from that popularity, the forthcoming 7-percent-plus ABV beer—which will arrive in February—isn't just a parlor trick. The IPA actually mixes four different forms of oats—malted, milled, naked, and milked—to achieve its golden-hazed glory.

"There are lots of hazy IPAs out there now," Calagione continues, "but finding true points of differentiation in this style category isn't easy, and we think we hit the bullseye in that regard. Malted oats have been a go-to ingredient to enhance haze and flavor in hazy IPAs for well over a decade. We worked at this recipe for well over a year to nail the ratios and layers of oat formats."

Dogfish Head even brags that they brought in "a group of oat milk scientists" to help work on the beer. As silly as that may sound, they're not kidding. "We found them right up the road from us in New York," Calagione tells me. "[They] have developed a unique extraction process that allows them to produce a very pure oat milk compared to competitors; no added gums or emulsifiers. Just pure natural goodness."

Unfortunately, I've yet to give Hazy-O a try, but Dogfish Head is clearly excited by the results. The brewery releases plenty of experimental beers, but this offering is going directly into the brand's full-year lineup, selling in six-packs of 12-ounce cans.

"Dogfish Head has been innovating unique IPAs for over two decades. In fact, the continual-hopping device we invented to make the O.G. imperial IPA, 90 Minute IPA, is now in a permanent collection at the Smithsonian. So, we are confident in our ability to continue pioneering creative breakthroughs in the IPA space, a space that is so vast that roughly every other craft beer sold in America today is some sort of iteration of an IPA," Calagione adds.

"Finally… How do I put this…? It's fucking delicious!" he then quips. "And we don't expect folks to just take us at our word on this... We will be selling it on draft and in limited-edition four-packs of 16-ounce cans to go from our Rehoboth location starting this Friday, so more and more folks can experience it themselves ahead of the national launch." 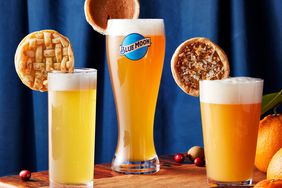 Blue Moon Releases Miniature Pies to Pair with Your Beer 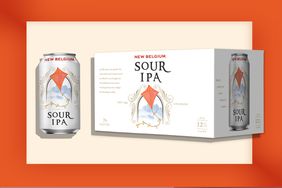