Costco has kept its popular rotisserie chickens at just $4.99 for over a decade, and even opened its own poultry processing plant.

In a crowded wholesale club market, Costco has continued to find ways to set itself apart. Fans rave about things like the chain's free samples, their anachronistically cheap hot dog and soda food court deal, and — one of their biggest draws — the brand's $4.99 rotisserie chickens.

Costco is so committed to maintaining the price of these precooked birds that, in 2019, the company even opened their own processing facility in Nebraska to save on expenses. But now, a new lawsuit alleges that by trying to cut costs, Costco is also breaking laws against livestock neglect.

On Monday, Legal Impact for Chickens — which describes itself as "a litigation nonprofit dedicated to making factory-farm cruelty a liability" — announced they had filed a lawsuit alongside the Animal Law Offices on behalf of two Costco shareholders. The published court filing claims, "Costco's directors and officers have violated their fiduciary duty by knowingly causing Costco to neglect and abandon chickens in violation of state law" — namely, in Nebraska and Iowa where the company keeps chickens.

"Specifically, in its poultry production business, Costco knowingly propagates chickens that are bred to grow so fast that many of them cannot stand under their own weight," the complaint continues. "Costco then sends millions of these fast-growing birds to dirty, crowded, factory farms, run by inexperienced contract growers who Costco recruited and trained. There, disabled birds slowly die from hunger, thirst, injury, and illness."

The lawsuit points to a 2021 New York Times article and the video investigation from Mercy for Animals that the article cites as proof that this treatment has become public knowledge.

"Once lauded as an innovative warehouse club, Costco today represents a grim existence for animals who are warehoused in inescapable misery," Alene Anello, president of Legal Impact for Chickens, stated. "Costco's executives must agree to follow both the law and general decency in order for Costco to resume being seen as an industry leader."

Among many individual claims of cruelty, the lawsuit alleges that Costco "fails to provide any realistic method for its disabled birds to reach food and water, or to receive individualized veterinary care." The filing also suggests that birds sometimes become so heavy that they lose feathers on their underside or fall onto their backs and cannot get up and are highly susceptible to lung, bone, and heart problems. Additionally, the lawsuit states, "An undercover investigation found Costco birds lying dead in the factory farm," with "multiple dead birds who appear to be a day or more into the process of decomposition."

We have reached out to Costco for comment, but have yet to receive a response as of this publication. 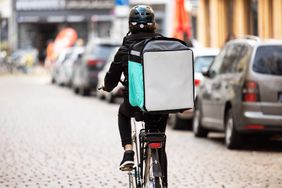