When Sondra Bernstein put out a call for used books, the response was overwhelming.

Sondra Bernstein's warehouse space is overflowing with cookbooks. Stacked on folding tables, they form a maze—Rachel Rays across from Alice Waters, diagonal from Thomas Kellers—roughly 10,000 tomes donated from publishers, restaurants, friends and strangers.

In late February, Bernstein, owner of Sonoma institution The Girl & the Fig, put out the call for used books to start rebuilding cookbook collections lost to last fall's wildfires. The response was overwhelming: Boxes arrived from all over California and as far away as Massachusetts. Someone drove a full pickup truck from San Mateo. A local widower offered his wife's cookbooks, a whole closet of them stashed in the basement that filled 30 or 40 boxes. One donation came from New Orleans, along with a note about the pain of losing a beloved collection to floods. The books formed jagged mountains on the floor of Bernstein's warehouse—so many that she eventually posted online, trying to call off further contributions

Bernstein's call-out will culminate in an all-day gifting event on April 8, where victims of the wildfires can replace lost cookbooks, free of charge.

She was inspired to launch her project, called Delicious New Chapters, after putting on a cooking class and luncheon for a Sonoma County official and some friends last December. A handful of the attendees had lost their homes in the fires, and when Bernstein gave out cookbooks to close the event, they noted that the books would be the first on new shelves.

Over about two weeks last October, a barrage of wildfires swept through Napa, Sonoma and Mendocino counties, scorching 160,000 acres, burning almost 9,000 structures and taking 44 lives. Collectively, they became the deadliest fires in California history, propelled by heavy winds over vineyards, across highways and through neighborhoods.

One of those neighborhoods was northeast of Sonoma town, where psychologist Natalie Portis has lived since 1999.

"My house actually burned on the last night of the fires," she says. "I thought I was going to be okay."

That house was Portis' sanctuary, and the kitchen its spiritual heart, where she cooked elegant meals for family and friends, roasted chicken and chestnuts in a wood-burning fireplace and poured through cookbooks and recipes arranged on five 10-foot-long reclaimed redwood shelves.

When it came time to inventory everything obliterated by the blaze, that's how the insurance company measured her treasured collection of cookbooks: in linear feet.

"I felt like the kitchen was my whole history," Portis says. "It wasn't a Pottery Barn kind of house. It was a collection of things from different places and people… There was just a warmth there, and it was just so very me."

Sitting on a stool, reading her cookbooks or preparing and adapting recipes from them was Portis' preferred entertainment and method of self-care. "When I'm stressed or tired, I cook," she says. "I come home and I make bread or cookies or soup. It really was the way I care for myself and other people."

For so many like Portis, cookbooks aren't just words on paper. They're roadmaps to memories, pages stained by splattered sauces and chocolatey fingers that evoke holiday dinners and weeknight feasts. Instructions are imbued with flashes of the past: the first time your husband made you Jamie Oliver's roast chicken, that Christmas when you almost broke the custard, the tiny kitchen where you propped a chair against the oven door to get the temperature above 375 degrees.

"In talking to some of the fire victims, from poor to wealthy, they talk to me about what they lost in their kitchens," says Sonoma food writer and author Kathleen Hill, who helped Bernstein organize the donation effort. "Rarely do they talk about a sofa or a chair, but they do talk about what they lost in their kitchens, because that ties in with providing for friends and family."

Bernstein has a dear cookbook collection of her own that she estimates at a few hundred volumes. Some she uses, some she turns to for inspiration, some evoke a particular moment or person, some "get dusted." The ones that mean the most were handed down from her mother. "They have that sense of being worn and used. They're more sentimental."

For Portis, the dearest items from her mighty shelves can't be replaced. They're her Italian grandmother's recipes, transcribed in her older sister's hand before both women passed away. Portis knows the steps for Christmas ravioli by heart, but pulling that card from a box of family dishes was a reason to remember, a chance to think back on the people tied up in those flavors.

She could write them down again, but it wouldn't be the same. "Some things are just lost."

Portis will join Bernstein at the gifting event next week, browsing the rows of folding tables piled high, thanks to a community that's been through so much.

"I will have cookbooks on my shelves," Portis says. "My house will be filled with the community that helped me rebuild and put my life back together. That seems so right for me." 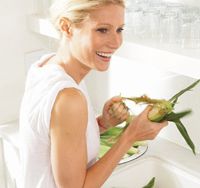 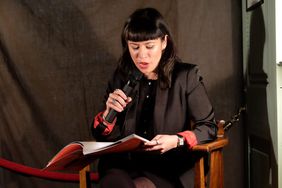