This Coffee Chain Has the Fastest Wi-Fi, According to PCMag

It's not Dunkin' or Starbucks.

What is coffee? If you answered "something you buy so you don't feel guilty using free Wi-Fi," you're close enough. Yes, sometimes a caffeine stop is just that, but coffee shops also serve as temporary offices and entertainment centers. Plus, knowing where you can find reliable Wi-Fi has certainly never hurt. With that in mind, PCMag has once again published a report on which coffee chains have the fastest Wi-Fi — and if being connected is your top priority, you may find yourself needing to relocate your, uh, office.

PCMag says they looked at nearly 100,000 Ookla Speedtests results taken from people's smartphones over the past year, honing in on chains with more than 100 tests over that period. In the end, the report provides data for 11 chains: Caffe Nero, Capital One Café, Caribou Coffee, Coffee Bean & Tea Leaf, Dunkin', Joe & the Juice, Krispy Kreme, Peet's, Philz, Starbucks, and Tim Hortons.

Last year, Dunkin' just barely topped Starbucks to claim the title of fastest Wi-Fi — and both chains did well again this year, finishing second and third respectively with average speeds of 40.4 Mbps and 26.1 Mbps. However, a new leader entered the charts: Joe & the Juice. The hip Danish chain — which has dozens of locations across a handful of major U.S. cities — is easily recognizable thanks to its clean interior design and thumping music. And with average speeds of 42.4 Mbps — the best of any chain — you may want to keep an eye out for them when you're in need of Wi-Fi (assuming that aforementioned music won't bother you!). Furthermore, in New York City, where Joe & the Juice has over 20 locations, PCMag says every single one offered speeds topping 100 Mbps.

Worth noting, Dunkin' has seriously upgraded its Wi-Fi since last year, while Starbucks also made gains, but they were more modest. Dunkin' jumped from a decent 25.4 Mbps last year to this year's more solid 40.4 Mbps. Comparatively, Starbucks only improved about 3 Mbps from last year when its average speed was 23.3 Mbps. And yet, as PCMag points out, Starbucks does have a leg up on the competition in other ways. Unlike Dunkin' locations which are often built for taking coffee to-go, Starbucks is typically better for a proper plop down. And of course, unless you're somewhere like Manhattan, Starbucks are also far easier to find than Joe & the Juice.

That said, four other chains weren't that far off from Starbucks in their average Wi-Fi speeds either. Finishing off the top seven were Krispy Kreme at 21.1 Mbps, Peet's at 20.9 Mbps, Caffe Nero at 19.9 Mbps, and Caribou Coffee at 18.8 Mbps. From there, things fell off pretty precipitously.

So overall, if Wi-Fi is part of your coffee shop decision, you have a number of factors to consider, leaving you to prioritize however you like. And don't forget to consider the coffee as well. No matter how fast the Wi-Fi, you can't download a better cup of joe. 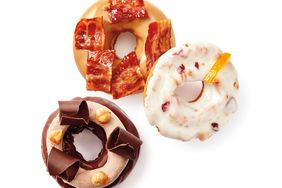 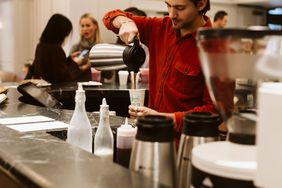 The Best Coffee in Portland Is Right Downtown