Jeremiah Tower, a patriarch of modern American cuisine and the genius behind San Francisco's Stars, has never wavered in his commitment to simple flavors. His Christmas dinner is as elegant as his culinary ideals are high.

"When people ask me if I'm opening another restaurant, I say the only thing I would ever consider now is an American bar in Havana." Jeremiah Tower is kidding, of course. As owner, chef and all-around gadabout at San Francisco's once-celebrated Stars, Tower spent 15 years on the scene, six days a week, smiling hello to as many as 800 people a day: a thin white duke proffering a flute of Champagne. By the mid-1980s he had become a star—one of America's first celebrity chefs—posing for a Dewar's ad and pausing for autographs. That was then. Now he's done quite enough hosting, thank you. Even his Havana fantasy is equivocal, suggesting nothing so much as Rick's Café Américain, complete with the misanthrope in the white suit.

But Havana is one of the few cities where Tower has not hung his toque. His travels, which have taken him from North America to Europe to the Far East and back (he's currently a New Yorker), are reflected in the menu he put together for this year's Christmas dinner: "I love the czarist Russian tradition that Christmas is for children and family, Easter for adults and their friends. But for me the food should always be a mix of the two holidays. The meal shouldn't be served all at once. One should be able to get up—and wander around, visit the cellar, open the wines, open presents—in between courses."

The first course, a theatrical construction of smoked sturgeon, deviled eggs and rose-petal mayonnaise, was a showstopper at the last incarnation of Stars he oversaw, in Singapore. The vodka-marinated roast beef is in his first cookbook, Jeremiah Tower's New American Classics (1986), as well as the one he's just completed (to be published in fall 2002 and as yet untitled). In place of the cheese course there are individual goat-cheese and blue-cheese soufflés—stress-free, because they're intended to fall. After a palate-cleansing pear dessert comes a true coup de grâce: buttery cornmeal pound cakes topped with Armagnac-soaked Australian glacéed apricots, maraschino crème anglaise and—the capper, "something I did recently for the first time"—a smoky sauce of chocolate, cream and Lapsang souchong tea. Call it autobiographical cooking—"a bit of Australia from the '50s and of New York as of a couple of months ago."

Tower's approach to dining has always combined the regional with the purely personal, where he's at with where he's coming from. In going over New American Classics, he spent a lot of time thinking about what defined a classic. "I remember that wonderful quote from Fellini," he says, "about always wanting to preserve 'the soft and precious flavors of the past.'" And though no one would ever describe the 58-year-old culinary artist and entrepreneur as either soft or precious, his ability to honor tradition while making use of the present is his true legacy.

After a peripatetic childhood that took him to Australia and England before he returned to the United States (where he received a degree in architecture from Harvard), Tower logged nearly 30 years in the restaurant business in the San Francisco Bay area. He began his cooking career at Alice Waters' Chez Panisse in 1972, when the restaurant was only a year old. Along with Waters (with whom he's since had a falling out) and Wolfgang Puck, he became recognized as one of the progenitors of what is now known as California cuisine—a term that makes Tower cringe.

"All the sins of California cuisine as they later developed—I'd prefer it if they weren't laid at my feet," he says. These include the overuse of goat cheese ("How did it get on lamb, for God's sake?") and the contraction of portions ("Once I saw a single small sea scallop on a huge white plate, with a dollop—read teaspoon—of white sauce on it, and a single basil leaf the size of the scallop. I said, 'What do we do with this, snort it?'"). But the worst is culinary overkill: six ingredients where three would suffice. According to Tower, "The chef's greatest achievement is to interfere as little as possible, while giving everything a sort of magic twist—the magic personal twist."

Tower brought his own magic twist to the already burgeoning California food scene with an insight that, in retrospect, seems laughably obvious. "At Chez Panisse," he says, "I convinced people that you could have a great restaurant that was simple, and that you should make your menu from the marketplace—every day." Though Waters would doubtless counter that she didn't need any convincing, Tower's timing was perfect. "When I looked around at the great San Francisco restaurants," he recalls, "they were all using frozen and canned foods, and I just started cooking from whatever I could find fresh in Chinatown." Soon he was persuading friends in the nearby Sonoma Valley to grow vegetables (from European seeds he provided) and to raise duck and geese expressly for confit.

At his next major stop, Berkeley's Santa Fe Bar & Grill, Tower and Mark Miller (now owner of the Coyote Cafe in Santa Fe and Las Vegas) began improvising with traditional Mexican salsa fresca, adding such heretofore unheard of ingredients as mango, lychee and pomegranate. "The next thing you knew we had all these wonderful salsas," he says. "As soon as they hit the newspapers and the magazines, salsa madness swept the United States."

Stars, Tower's first purely personal creation, opened in 1984. "It was really a democratic idea for an American restaurant," he says now, looking back. "It was the party that never stopped and that everybody was invited to." And for many years, everybody came: society swells dropping by before performances at the neighboring opera house and symphony hall; politicians drifting over from nearby city hall; touring musicians and singers; Bay Area rock and film royalty; and local citizens and tourists of all descriptions. The restaurant's light began to dim after the Loma Prieta earthquake of 1989. The damage that buildings in the immediate area suffered took a slow toll on business. The opera and the symphony relocated in 1994 while their homes underwent structural repairs, and the municipal government moved its offices. No pols, no society, no divas: "With the performances gone, the party feel really went out of Stars," Tower says. "It became like any other restaurant."

Any other slipping restaurant. According to Tower, revenue dropped from $9 million in 1993 to $5 million the following year, even as he was selling licenses for other Stars in other cities. (Andrew Yap bought all four restaurants—in San Francisco, Seattle, Manila and Singapore—in 1998.) But Tower maintains that he always intended to sell Stars: "I never thought I would stay in the restaurant business forever. There's a life for a restaurant—and a restaurateur—that is, when you're pushing the envelope all the time, really only 10 to 20 years."

After spending all of 1999 and part of 2000 helping Yap get the Manila branch of Stars off the ground, Tower moved to New York, where he's been happily eating his way around the city. "Sydney and New York are the most exciting restaurant towns in the world now," he says. He sees the widespread fanaticism for fresh ingredients that he helped spark in the Greenmarket at Union Square, in the restaurants of Danny Meyer and Mario Batali and pretty much all around. "It's wonderful that it's now so taken for granted," he says. "The revolution worked, and the country is so much better off for it."

And this particular revolution, it seems, will be televised. Tower has plans to host a program—the working title is America's Best Chefs—centered on the regional chef awards that the James Beard Foundation presents. "It will be very much about the chefs and the regions in which they're cooking," he says, "with no studio kitchens and no studio audience." He's writing another book, too: a history of the West Coast food revolution, to be called California Dish. Does the name promise a little sauciness from the sometimes tart Tower?

"Oh, yes," he says. "But it's going to be funny and loving. Definitely the high road." 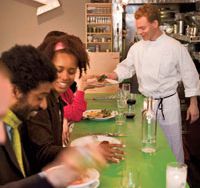