B.J. Novak and chef Tim Hollingsworth's "Chain" concept has gotten the attention of the very brands it's trying to emulate.

Imagine Bruce Springsteen going to see a Bruce Springsteen cover band and being so thoroughly impressed that he invites the band to tour with him. Something like the food-world equivalent of that happened in Los Angeles on Friday, when Taco Bell chef Rene Pisciotti went to Hollywood multi-hyphenate B.J. Novak's Chain pop-up and ate chef Tim Hollingsworth's version of a Crunchwrap Supreme.

Blown away by the flavors, the contrasting textures, how Hollingsworth used Snake River Farms wagyu for this distinctly hexagonal and crunchy taco-burrito hybrid while also making his own taco sauce, and how Chain decorated its pop-up house with vintage chain-restaurant memorabilia, Pisciotti gave his official blessing to this over-the-top ode.

"Tim walked me through it ingredient by ingredient and how they were assembling it," Pisciotti says. "He was on point, just left of center enough that it was his own spin on it. But ultimately, when you're eating this thing, you're like, this is a Crunchwrap. I was genuinely concerned that he wasn't going to be able to get the texture right because our tostada shells are so crunchy, and he figured out a way to do it. It's a pretty magical thing that they've done."

Taco Bell, which is celebrating its 60th anniversary this year, plans to blast what's known as the Cruncho Perfecto on social media and work with Chain on collaborative events. These events might be at Taco Bells, Taco Bell Cantinas (booze has been a big part of Chain's menu drops, and Chain even offered a wine pairing for the Cruncho Perfecto) or other locations. (You can follow Chain on Instagram or text 323-310-4642 for updates.)

"I'd love to build this and grow it in an organic way," Pisciotti says. "I'd love to be able to make this accessible to other parts of the country."

Chain — which, thus far, has only materialized as pop-ups — exists as both an homage and a parody of American chain restaurants. So part of the experience is enjoying Chain's description of The Cruncho Perfecto:

"The thing about me is no one can ever tell if I'm serious or kidding about anything," says Novak, who first discussed the idea of Chain publicly in 2018. "And neither can I. I love walking that line, that deadpan. Ideas out there that are funny but serious at the same time, that's really my inspiration for everything, my ethos in life."

Pisciotti, a self-described "chief unicorn herder" (the words "unicorn herder" are in his LinkedIn profile) clearly appreciates Chain's sense of humor. But make no mistake: Chain's secret sauce is how it straddles the line between seriousness and absurdity.

"It's coming from a nostalgic place," Hollingsworth says. "When I wasn't eating food my mom made, Southern-style dishes like chicken and dumplings, Sunday pot roast, chili and Tex-Mex-style tacos, I was eating at a chain restaurant. I worked construction with my dad in high school and would be on the road and eat at a lot of different chains. And then when I started dating, I'd go to Chili's or Outback. There's this very fond memory of certain dishes. But then when I go now, it's not really what I remembered or what I was expecting."

So Novak, who also bemoans how many chain restaurants have "really stagnated," and Hollingsworth are making new memories.

Chain's take on the McRib involved Snake Rivers Farms ribs cooked on Traeger grills and barbecue sauce made with a $3,500 bottle of Pappy Van Winkle. Novak says one of his goals is to collaborate with Pappy Van Winkle and that the second-best outcome might be Pappy Van Winkle suing Chain. Chain's Takitos — taquitos with an extra-spicy Takis-style chili dust — started as a Photoshop joke. But then Hollingsworth meticulously combined chile de arbol, habanero, chile California and several other chilies with lime powder, sumac and other spices.

Chain tapped Otium mixologist Ryan Silva to create cocktails including the Blue Drink (a take on a daiquiri, made with rum and blue Curaçao in a slushy machine), the Red Drink (an Opus One red wine float with vodka), and the Green Drink (a spicy mezcal cocktail). Guests who didn't want alcohol served themselves from a jug of water labeled "Tap Is Fine."

Illustrator Jen Lewis, who's worked for Buzzfeed, A24 and Netflix, reinterpreted the idea of games on a kids' menu and created both a crossword and word-search puzzle where every answer is Chain. (My 8-year-old daughter finished the entire word-search puzzle and liked how easy it was.)

Novak originally thought of Chain as a single restaurant, inspired by Applebee's, TGI Friday's, Chili's and other all-time-great chains. ("Even more than nostalgia, the chain restaurant created a type of American cuisine," he says. "The American chain restaurant, with its consumerist crowd-pleasing cuisine, is a real official American genre.") Novak is now open to many options, including getting Chain items on the menus of actual chain restaurants, or in the sauce aisles and frozen-food sections of grocery stores, or maybe in the metaverse.

The buzz has been building since Chain did its first pop-up in March 2021 and served Hollingsworth's Bustin' Onion with Black Garlic Ranch to guests including John Mayer and Shirley Chung. Prominent food-loving friends of Novak, including Mindy Kaling and Kiernan Shipka, have posted about Chain on social media. Food truck king Roy Choi came by for a ribwich.

Pisciotti first experienced Chain at a pop-up in Anaheim. After enjoying a Bustin' Onion, he invited the Chain team to Taco Bell's test kitchen.

"We made them our top items and kind of walked them through all of the ingredients, and then we just let them loose," says Pisciotti, who has vivid memories of Novak pounding crunchy tacos, bean burritos, nachos, Crunchwrap Supremes and more before the Chain crew played around with the kitchen's cooking equipment. "Their eyes are so big, and they go in so hard, and they hit a wall, and they push through it. B.J. Novak was putting everything away. It was incredible. They hadn't had this food in a long time, and I think it brought back memories."

At that moment, Pisciotti had no idea this nostalgia-inducing face-stuffing experience would lead to anything. He's happy about what's happened since then and what might happen next.

For Novak, this is all about channeling the pure joy that chain restaurants have given him throughout his life, even in adulthood. "I remember vividly when a Chili's opened [in L.A.]," he says. "My friends talked about it like it was a seismic restaurant opening. And I remember my anticipation when Dunkin' Donuts came to L.A. I think L.A. is the best food city in America. I love the incredible food culture here. I'm a huge Roy Choi fan. I'm a huge Tim Hollingsworth fan. I would read every Jonathan Gold review. And yet, there was nothing more exciting for me, deep down, than the Chili's opening. And I felt I wasn't the only one who felt that way." 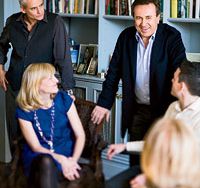