Three visionary restaurateurs and their high-style, high-end chains are serving some of Philadelphia's best food.

In April, when Bruce Cooper was opening his new restaurant, Novelty, flower arrangements arrived from two competing Philadelphia restaurateurs, Stephen Starr and Neil Stein. "Is Stephen's in the form of a wreath?" Cooper asked.

He was joking--but then again, he wasn't. For more than a decade, Cooper has operated one of the city's best restaurants, Jake's, in the Manayunk neighborhood; with Novelty he was treading on Starr's turf. Starr owns four trendsetting restaurants in or near the Old City area. All wildly popular. All within walking distance of Novelty.

Now Stein is looking over his well-tailored shoulder too, as the ever restless Starr prepares to open a restaurant on his side of town. In late summer, Starr announced a partnership with New York chef Douglas Rodriguez to do an upscale (read: pre-Castro) Cuban restaurant, Alma de Cuba, two blocks from Stein's flagship, Striped Bass.

If all these moves have the feel of a high-stakes chess match, no one is better equipped to play than these three friendly rivals. The restaurants that Starr, Stein and Cooper have readied within the past year--a total of eight, each one a carefully crafted blend of enormous capital, top designers, effective buzz, capable chefs and consultant-tweaked menus--offer some of the best eating in Philadelphia right now. They are also, in many respects, projections of their owners' distinctive personalities.

THE KING OF LUXE

Exquisite furnishings and impeccable housekeeping are the signatures of a Neil Stein restaurant. His passion for luxurious accessories is evident in the $1,200 custom-made dining chairs at Rouge, the $6,000 antique bookshelf next to the host stand at Bleu and the dramatic metalwork fish sculpture he commissioned for Striped Bass, as well as in his own Armani and Jil Sander wardrobe, French-made shoes and black Porsche 911. His zealous rest-room spot checks and fanaticism for fine glassware polished to a gleam are legendary in the restaurant community. But Stein's legacy is likely to be his visionary side: He helped jump-start Philadelphia's restaurant renaissance in the 1970s, and he was the first to open an outdoor cafe on Rittenhouse Square.

Emboldened by the success of Striped Bass, which opened in 1994, and Rouge, which followed in 1998, the 59-year-old Stein has quickened his pace to prepare three more restaurants during the past year--Fishmarket, Bleu and the soon-to-open Avenue B. Altogether, they represent an investment of more than $3.5 million.

Bleu (227 S. 18th St.; 215-545-0342) was a hit from day one. Its black rattan chairs and bare, brass-rimmed black tables are a sleek, Prada-esque counterpoint to the lush draperies and plush fabrics of Rouge, a few doors down. Executive chef Shola Olunloyo, who was born in Nigeria and reared in London (and worked, briefly, for Stephen Starr), characterizes his menu as American bistro with French and Asian influences. This translates into Angus beef carpaccio with truffle sauce, duck confit spring rolls, and a lobster-laced crab cake served with lemongrass sauce and a corn and leek confit.

Fishmarket (122 S. 18th St.; 215-569-9080) is both a revival of Stein's first seafood restaurant, the Fish Market, and a minimalist version of Striped Bass. Geared toward a neighborhood clientele, it offers pristine day-boat scallops, jetted-in oysters and sushi-grade tuna, all at scaled-back prices, prepared by Striped Bass veteran Carolynn Angle.

Stein has a knack for choosing talented chefs and giving them a measure of freedom in the kitchen. For Avenue B (260 S. Broad St.; 215-790-0705)--his largest restaurant to date--he's tapped Patrick Feury, a sous-chef from New York's Le Cirque 2000 and the brother of Striped Bass executive chef Terence Feury. The high-profile location, just steps from the city's main theater and concert stages, does not guarantee success: Two other restaurants have opened and closed in this sprawling space within the past three years. Stein's Midas touch will be tested yet again.

Not that he's showing any signs of nervousness. Before Avenue B debuted, Stein had already begun to talk up his plans for a '40s-style supper club called Swing. He estimates that it will cost some $3 million, but in his mind, the room is already built: At the bar, he envisions a satin doll in a back-slit skirt, drinking a Manhattan and brandishing a tortoiseshell cigarette holder. Given his track record, there's little reason to doubt that 12 months from now, Stein will find himself lighting that lady's Lucky Strike.

A flamboyant former concert promoter and nightclub impresario who has made a career of staying ahead of the pop-culture curve, Stephen Starr creates theatrical restaurants that have a youthful vibe. Each has a design hook: overhead lights shaped like giant martini olives at the Continental, the starry-night ceiling of tiny light bulbs at the Blue Angel, the hundreds of flickering votives at Tangerine that look like something out of a Madonna video.

Starr, who is 44, launched his restaurant career in 1995 when he converted a diner into the Continental, a retro lounge with world-beat cuisine and a cool factor so persuasive that other restaurateurs began flocking to Old City. Like Stein, he isn't shy about whipping out the checkbook. In 1998 his contemporary-Asian Buddakan made an even bigger splash than the Continental, with its $2.1 million budget, larger-than-life golden Buddha, $33,000 sound system and a glow-in-the-dark communal table. Last fall, he opened Tangerine, a $2.8 million candlelit Casablanca that quickly established itself as a Gen-X El Morocco, and in January he presented the Blue Angel, a $1.5 million re-creation of an Art Nouveau-era Parisian bistro.

At Tangerine (232 Market St.; 215-627-5116) it's too dim to read the menu and too loud to hear conversations across the table. Music pulses insistently. Pretty people wearing cell phones like sidearms jam the bar. Surely the food will be an afterthought...but executive chef Chris Painter woos skeptics with harissa gnocchi paired with dates and creamy celery root, a pleasantly puckery chicken tagine with green olives and preserved lemons, and a lavish duck-confit couscous brimming with caramelized apples, turnips and prunes. These flavor combinations are still relatively uncommon in Philadelphia, and are welcome.

The Blue Angel (706 Chestnut St.; 215-925-6889) breathes new life into a space that was once a cafeteria, then a deli. A French bistro was not high on Starr's wish list until he saw the interior's well-preserved original details: a gently worn tile floor, a milk-glass ceiling and hat racks along the walls. The kitchen, which has already churned through three executive chefs, sustains the madding crowd with time-tested classics: cassoulet, bouillabaisse, grilled hanger steak and moules-frites.In an offbeat location, just beyond trendy Old City, suits and slackers vie for the better tables--but even those with reservations are often kept waiting.

Starr has just completed Pod (3636 Sansom St., 215-387-1803), a retro-futuristic Japanese restaurant near the University of Pennsylvania, featuring a white-on-white room with enclosed dining pods and tuffet-like bar stools that light up when someone sits down. Now, along with Alma de Cuba, he's developing a second restaurant on Stein's territory, as well as a hotel restaurant in Society Hill in partnership with Philly-born actor-musician Will Smith. Once Starr yearned to live in New York; he says he's given that up, but hints he might enjoy running a restaurant there someday.

Can someone with only two restaurants be considered a major player? Though clearly more risk-averse than Stein and Starr, Bruce Cooper has earned his place in their league through long experience as a chef-entrepreneur. Thirteen years ago he was one of the earliest investors in Manayunk, a blue-collar neighborhood that was starting to draw art gallery and boutique owners. With the works of local artists on the walls and Cooper himself in the kitchen, cooking in the New American style, Jake's quickly established itself as a citywide favorite.

Cooper, 46, has a more subdued style than Stein and Starr. Understated sophistication, consistency and intensive staff training are his hallmarks. Most evenings find him expediting plates in the kitchen at Novelty (15 S. Third St.; 215-627-7885) rather than schmoozing with customers in the earth-toned, industrial-chic dining room. He doesn't care whether his customers come in Brioni suits or track shorts, as long as they keep coming.

Rather than follow a single-cuisine theme, as Starr has done in his places, Cooper offers a globally inspired menu that lets customers either dine or graze. Thus Novelty's appetizers range from crème fraîche-topped spinach pierogis to seared foie gras with caramelized Mission figs. Entrées might include a roasted duck breast with an ancho chile sauce and a side of Cheddar cheese grits, or pan-seared salmon with black sticky rice and grilled baby bok choy. Cooper and chef de cuisine Matthew Spector, who came from Jake's, have near-perfect pitch for these vivid, harmonious flavors. Stein and Starr hire skilled culinarians for their establishments; Cooper is one.

When Philadelphia first awoke from its steak-or-seafood trance nearly three decades ago, storefront restaurants run on a shoestring by kids with degrees in art and literature led the way to more adventurous dining. The second restaurant renaissance that's sweeping the city now is backed by bigger budgets and bolder owners. Spurred by a healthy economy and a city finally basking in a positive self-image, these new entrepreneurs strive to provide customers with a complete experience, understanding that people want to be dazzled as well as fed. Fortunately, there's no need to debate style versus substance. Thanks to Neil Stein, Stephen Starr and Bruce Cooper, Philadelphia's new restaurants have equal measures of both.

Maria Gallagher writes about food for the Philadelphia Inquirer 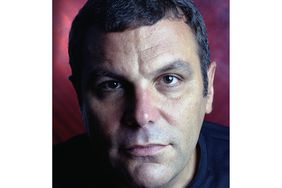