How I Celebrate Kwanzaa

Kwanzaa is a time for creativity, for foods that helped the African people survive on both sides of the Atlantic.

To some 13 million Americans of African descent, December 26 is not just the day after Christmas. Instead it marks the beginning of Kwanzaa, a week of feasting and reflecting on seven principles of particular importance to the African-American community. Each day, a candle is lit to invoke one of these principles, beginning on the 26th with unity and ending on January 1 with faith.

Because Kwanzaa is such a young holiday — it was created in 1966 by Professor Maulana Karenga — its culinary traditions are still evolving. Christmas calls for a ham or a turkey, and potato latkes signal Hanukkah, but there is no set Kwanzaa menu. And since the holiday lasts a week, every meal can't demand a day in the kitchen. Nonetheless, Kwanzaa is a time for creativity, for foods that helped the African people survive on both sides of the Atlantic.

My Kwanzaa dinner centers on chicken — known in the South as the gospel bird because of its place on the Sunday dinner table. The chicken is given a Caribbean flavor with a mango-rum glaze. Dilled string beans turn up with crisp oven-fried wedges of sweet potato, which is another nod to the African-American diet in the South. So is the dessert, a store-bought pecan pie topped with vanilla ice cream. There's even a cold-weather twist on a popular Caribbean drink, poured over ice in the islands, but here served hot with the meal.

JESSICA B. HARRIS is a New York City cookbook author. Her latest book is A Kwanzaa Keepsake(Simon & Schuster). 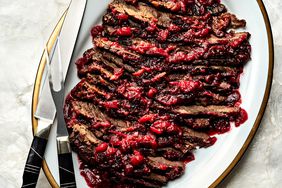