In 1962, a struggling McDonald's owner in Ohio was trying to find ways to increase his sales during the Lenten season, when his predominantly Catholic customer base abstained from eating meat on Fridays. "I was struggling," Lou Groen told the Chicago Tribune in 2007. "The crew was my wife, myself, and a man named George. I did repairs, swept floors, you name it. But that area was 87 percent Catholic. On Fridays we only took in about $75 a day."

Groen noticed that a local spot was extra-busy on Fridays, mostly because of what he called their "very good fish sandwich." That's about when he decided that if you can't beat them, at least you can serve some of the same menu items. "All our customers were going to Frisch's," he said. "So I invented my fish sandwich, developed a special batter, made the tartar sauce and took it to [McDonald's] headquarters."

That sandwich — which was eventually named the Filet-O-Fish — became the first-ever addition to the original McDonald's menu. It's still a McStaple, and a spokesperson for the fast food chain told USA Today that almost 25 percent of McDonald's annual Filet-O-Fish sales happen during the six weeks of Lent.

But in some parts of North and South America, fish sandwiches (or fish, period) isn't the only thing being served on Lenten Fridays. According to Atlas Obscura, the world's largest rodent has been an acceptable meal choice in Venezuela since sometime between the 16th and 18th centuries. Because capybara were semi-aquatic, strong swimmers, and had sort of webbed feet, some clergymen wrote to the Vatican to ask if the chunky rodents could be classified as a fish. The church granted that request, and capybara have been consumed during Lent ever since.

On her website, environmental historian Dolly Jørgensen wrote that the church agreed to a similar exception for beaver. "Even though most people these days think the restriction is about eating meat, the dietary restriction wasn't about mammals & birds versus fish, but about land versus water," she explained. "Thus, other animals that spent their time in the water qualified as aquatic and could be eaten at Lent."

Jørgensen said that beaver had been classified as an "aquatic animals" or "amphibious animals in cookbooks from the 15th and 16th centuries, and 12th century archdeacon Gerald of Wales wrote that "where beavers abound, great and religious persons, in times of fasting, eat the tails of this fish-like animal, as having both the taste and color of fish."

In 2016, NPR profiled a St. Louis BBQ restaurant that served "humanely trapped" beaver on Fridays during Lent. "A friend of ours said that the Catholic Church is fine with this for Lent," the co-owner of Bootleggin' BBQ told the outlet. (A spokesperson for the Archdiocese of St. Louis said that the diocese's chancellor for canonical affairs was "not aware of any current dispensations along these lines.")

And muskrat was OK'd as a Lenten option in parts of Michigan, either because the War of 1812 left farms devastated and food options in short supply, or because a missionary allowed hungry fur trappers to eat muskrat during a time when food was scarce, depending on who you ask. (Either way, it seems to date back to the early 1800s.)

"The Detroit archdiocesan communications department said there is a standing dispensation for Catholics Downriver — in Detroit's southern suburbs and below — to eat muskrat on Fridays, although no documentation of the original dispensation could be found," a Catholic News Service report quoted by Hour Detroit said. In other parts of the U.S., you might find turtle or alligator as Lenten menu choices.

Or, barring that, there's always the old Filet-O-Fish. 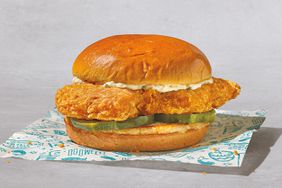 Popeyes Adds New Fish Sandwich to Its Menu, Just In Time for Lent 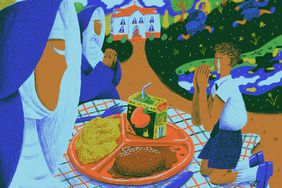