It Happened to Me: I Was Denied Coffee at a Brunch Restaurant

Is this a trend or something?

Even though I may drink more coffee than is medically advisable, I think it's reasonable for me to expect that when I go to breakfast or brunch, coffee will be available. On a recent visit to Washington, D.C., I gathered with friends at one of the city's hottest brunch spots: HalfSmoke, an excellent Southern-inflected sausage restaurant that offers all-day brunch on Friday, Saturday, and Sunday. I considered grabbing coffee earlier that morning, but thought, "It's fine; there will be coffee at brunch! I can wait. I'm fine! I will be fine and can wait." I ate a handful of Cheez-Its and remained in bed, alternating dozing off and reloading Instagram until it was time to go.

At brunch, after we put in our food (and mimosa) orders, I added, "And I'll have coffee, please." The waiter looked at me for a beat, and then he said, "We don't have coffee."

I froze. Time froze. I later learned that my expression was one of incredulous horror. I think I was waiting for him to add, "But we're putting on a pot now." When that didn't come, I assumed he was doing a friendly bit, and that he was Punking™ me, or it was like when you asked an adult if you could go to the bathroom, and they said, "I don't know, can you?" A nervous energy descended upon the table. I laughed, but the waiter did not.

"You mean it?" I said. My consciousness floated to the ceiling and watched the scene transpire from above.

"We don't serve coffee," he said, politely. I looked at a friend, and he shrugged. Was I missing something? Were we not at a brunch establishment? How could a place serve scrambled eggs, French toast, and breakfast burgers, but not serve coffee? Was I being terrible? Needy? High-maintenance?

I don't remember much of what happened next. I remember one friend asking if we could leave to acquire coffee and bring it back to the restaurant, and the waiter said that was fine. So three members of the group – half of us – left to purchase coffees. My friend, who is from New York but lives in D.C., said she had experienced this at another D.C. restaurant during brunch. I couldn't believe it. She speculated that maybe because we were from New York, we expected coffee to be a given everywhere, but people are less reliant on coffee in D.C., so you don't find it in as many places. I felt somewhat ashamed; maybe my need for coffee was the real issue? Nah, it couldn't be that, I thought, chugging the first few scalding sips of my large coffee, burning off tongue lining.

We brought our coffees back to the restaurant and sat down, enjoying the rest of our brunch. My burger was exquisite. The bottomless mimosas were, indeed, bottomless. I calmed down.

But I remained confused. Coffee is so inexpensive and simple for restaurants to make. It doesn't even have to be good, really, though bonus points if it is. Why had they made the decision not to serve one of the most popular beverages in the world, let alone the most popular brunch beverage? The waiter hadn't offered up any underlying philsophy that might explain it – that it was a health thing, for example, or that the owner was Mormon – so I didn't even know how to process it. (I Googled the founder, Andre McCain, who is on record in the Washington Post as someone who drinks coffee.)

The restaurant's main focus is sausage, so I would understand them not serving coffee otherwise, but the second eggs are involved, in a brunch scenario, coffee becomes mandatory. Breakfast foods, I believe, require coffee.

The next day, having cooled down, I emailed the restaurant to see why they didn't serve coffee. There had to be a reason. I haven't heard back yet, but I will not rest until I understand.

On OpenTable, one reviewer (from the New York area) commented in March, "...They do not have coffee on the menu. Our server was super nice and brewed us a pot, but it was terrible bitter coffee." 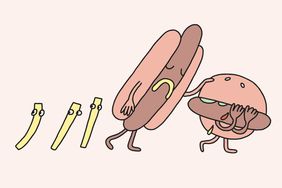 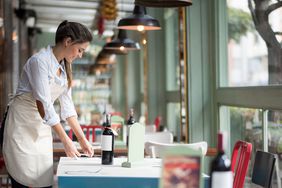