Where did F&W's editors find the most exciting new restaurant dishes of the year? In San Francisco, Los Angeles and New York, to be sure—but also in Bristol, Rhode Island, and Marble Falls, Texas.

"I’d always rather eat a poached chicken than a fried one," says Daniel Humm, the new chef at New York City’s palatial Eleven Madison Park , who was formerly at San Francisco’s Campton Place. Ordinarily I wouldn’t agree with Humm—I’d take crisp batter-fried chicken any day—except that his poached poularde with big slices of black truffle slipped under the skin is just so succulent and good. A perfect example of Humm’s precise modern French cooking, the poularde (which is just another name for a big fat chicken) is poached whole in a chicken consommé that Humm spikes with truffle juice, making the meat tender and moist—and extra truffley. The poularde (Humm gets it from Four Story Hill Farm, in Pennsylanvia) comes with luxurious accompaniments that change with the seasons but might include small ravioli stuffed with lush shredded chicken thigh meat. The black truffles, though, are a constant. "Even when it’s not truffle season, I always manage to find some for the poularde," says Humm (11 Madison Ave.; 212-889-0905).

I normally wouldn’t advocate the use of quotation marks on a menu. When it comes to food, the less postmodern the better. But at Gayle, chef Daniel Stern’s deconstructed veal stew—which really ought to be listed on the menu as "veal stew"—transcends its cleverness by being flat-out delicious. Stern, who opened this adventurous little American restaurant last year after running the kitchen at Le Bec-Fin, composes the dish with crispy sweetbreads, seared flank steak, moist brisket and breast meat, slivers of tasty veal tongue and a cigarillo-size cylinder of shredded veal in a rich veal reduction and served with collard greens. The resulting "stew" is far more memorable than any stew I’ve ever had (617 S. Third St.; 215-922-3850).

Johnny Monis was only 24 when he opened this small, austere restaurant in 2003. He quickly attracted a cult following, thanks to his outstanding Greek-Italian dishes. On my latest visit I was pretty giddy over the stuff that kept pouring out of the kitchen, from crostini topped with truffled beet tzatziki to house-cured lardo, coppa and mortadella. I also had one of the most mind-blowing pastas in recent memory: fresh homemade tagliatelle with an intensely flavorful sauce of mushroom stock, butter, olive oil and guanciale (pork jowl) that Monis cures himself in salt, sugar, fresh thyme, bay leaves and peppercorns. Like most of Monis’s food, the dish is both original and highly approachable. But sampling his cooking can be a challenge: Komi has only 38 seats and doesn’t take walk-ins—and if Monis can’t make it in on a certain night, he closes the restaurant (1509 17th St., NW; 202-332-9200).

We drove to Vie through a snowstorm, and by the time we arrived, the Chicago suburb of Western Springs resembled a Hopper scene: quiet town square, eerily lit train station, water tower looming nearby. Any welcome would’ve felt warm at that point, but chef Paul Virant’s cooking turned out to be just what we needed. His winter white salad—a tussle of endives, sunchokes, turnips, sweet onions and Parmesan—showed Virant has a way with seasonal produce. But what really sold me on his cooking was the Gulf shrimp. I usually find shrimp dishes boring, but I had a hunch Virant’s would be an exception. He starts with beautiful shrimp from the Gulf of Mexico, which he marinates in thyme, shallot, lemon zest, chile flakes and olive oil; grills until they’re sweet, smoky and shrimpy in the best possible way; and serves with mandarin orange, olives and—a nice surprise—fennel he pickles himself (4471 Lawn Ave.; 708-246-2082).

"The New England growing season is only about four days long," says Champe Speidel, chef and co-owner with his wife, Lisa Harrison, of this restaurant, Persimmon, in tiny Bristol, Rhode Island. The cold weather doesn’t stop Speidel from preparing sophisticated, French-inspired dishes using local ingredients. On the freezing night when I first ate there, Speidel had simmered gorgeous chanterelle, matsutake and chicken-of-the-woods mushrooms with aromatic herbs and homemade mushroom stock to make a broth, which he reduced, reduced and reduced some more to intensify the earthy flavor. Then he pureed and strained the mixture until it was incredibly smooth, and stirred in a little cream. He topped the soup with sautéed mushrooms and sprinkled it with arugula sprouts and a vegetable dice. But the best part was hidden at the bottom of the bowl: fantastic homemade agnolotti filled with pureed potatoes and black truffles (31 State St.; 401-254-7474).

I arrived at 112 Eatery at 11 P.M., hoping to beg some food off a waitress before she started flipping chairs onto tables. To my surprise, the dining room was packed, so I grabbed a spot at the bar. The woman sitting next to me jabbed her finger at my menu, full of simple but intriguing dishes with no discernible theme: "Order the lamb scottadito!" she blurted, describing the dish with enough admiring expletives to make George Carlin blush. "You must be a chef," I replied. She was, as were several other people at the bar. There are many reasons why 112 Eatery is Minneapolis’s top chef hangout, and the scottadito is one of them. The lamb chops, seared to perfection and served with pesto-spiked goat’s-milk yogurt, are the kind of food a ravenous cook might throw together at the end of a shift—a primal dish that’s eaten standing up, utensils be damned. Chef Isaac Becker later shared the secret to his lamb’s crispy crust: lard. He coats the chops in just-melted lard and lets them rest for a while in their fat-blankets, then he tosses them in a hot cast-iron pan. "Scottadito means ’scorched fingers’ in Italian," my self-appointed menu consultant informed me, grabbing the last chop off my plate (112 N. Third St.; 612-343-7696).

After a year of absurdly grand dinners at places like Per Se in Manhattan, I find it comforting that the best dessert of all came from the unlikely town of Marble Falls, Texas. At Café 909, a modern American bistro, chef Mark Schmidt serves a pistachio parfait that’s my idea of perfection. First, it’s not too huge (I’m tired of Brobdingnagian desserts). Second, it has textural surprises: When the frozen pistachio-flavored mousse softens, it blends deliciously with the burnt honey-caramel sauce underneath and the toasted ground pistachios sprinkled on top. Schmidt uses a Dixie cup to mold the parfait. A Dixie cup! Take that, Thomas Keller. We Texans are way ahead of you (909 Second St.; 830-693-2126).

I don’t like to see my food before the chef has served it nicely on a plate. So for dinner at Cut—the new Richard Meier–designed steakhouse at the Beverly Wilshire, with a menu by Lee Hefter of Spago in Beverly Hills—I wasn’t especially happy when the manager came to our table with a platter of raw meat. Representing myriad kinds of filet mignon, from Illinois corn-fed USDA prime to "true" Japanese wagyu from Kyushu, the show is actually instructional. Anyone with two eyes and $120 is bound to choose the beautifully marbled wagyu. Grilled over wood and finished in a 1,200° broiler, the steak is luscious; if it needs anything, it’s the rich tarragon-infused béarnaise sauce (9500 Wilshire Blvd.; 310-276-8500).

People in the restaurant business might think I’m crazy, but I wish I was allowed into the kitchen to eat staff meals—particularly at certain places, one of which is Ame, the wonderfully serene year-old restaurant in the St. Regis Hotel. This is the latest opening from chefs Lissa Doumani and Hiro Sone, who run Napa Valley’s beloved Terra. At Ame, their menu combines Californian, European and especially Japanese ingredients and techniques. Which brings me to Lissa’s Staff Meal, which Doumani created as a tribute to the staff meals served at her favorite Japanese restaurants in San Francisco. An extraordinary mix of textures and flavors, the dish is made with addictively chewy cuttlefish sashimi cut into long, glistening noodles and tossed with crunchy pickled burdock (yamagobo in Japanese) and delicate salmon roe; raw quail egg, served in its little speckled shell (you stir it into the dish yourself) makes everything extra silky. Doumani swears she doesn’t serve this dish to her actual restaurant staff and says the name is just a reference to those great Japanese staff meals she’s had in the past. But I think she’s just saying that to stop me from invading her kitchen (689 Mission St.; 415-284-4040).

I’ve been feeling the urge to eat as much foie gras as possible now that it’s been banned in Chicago and may one day disappear from American restaurants. And I can hardly think of a better place to indulge than Jöel Robuchon’s restaurants. Perched on a cushy stool at the counter of L’atelier de Jöel Robuchon, the less formal of his two Las Vegas outposts, I ordered the foie gras–stuffed quail and watched as a cook in the open kitchen seared the bird. I could hear the sizzle of the skin—glazed in soy sauce, garlic, honey and olive oil—as it turned mahog­any. It came out crisp and juicy, an exquisite cradle for silky foie gras (MGM Grand Hotel & Casino, 3799 Las Vegas Blvd. S.; 702-891-7358). 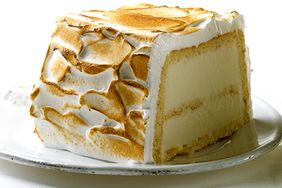 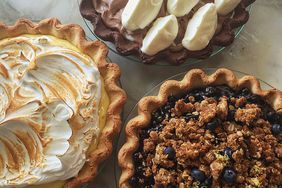 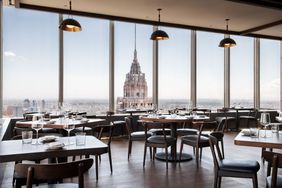