British musician Steve Winwood had a solid Top 10 hit in 1981 with the song "When You See a Chance," which had motivational lyrics like "Don't you know by now / No one gives you anything" and, of course, a chorus of "When you see a chance, take it."

The meaning of that song can be up for interpretation, but it's probably safe to say that he didn't mean "Steal a beer truck if you see one idling in a Rhode Island parking lot." On Monday, 44-year-old Jeremy Fellela allegedly saw his chance and took it, making off with, yup, a beer truck while its driver was making a delivery at A to Z Liquors in Providence.

According to WPRI, the liftgate of the truck was still open, so as Fellela pulled away, bottles and kegs rolled out of the back and into the street. He didn't get terribly far before he was stopped by the cops — after a comically low-speed chase, Fellela crashed the truck into a utility pole less than two miles from where his adventure started. On Tuesday, he was charged with driving to endanger, eluding police, possessing a stolen vehicle, and refusing to have his blood-alcohol level measured.

"The cops ran in and kind of pulled the guy out of the car and got him on the ground," Greg Johnson, who was outside in his yard when the chase took place, told WPRI. "You know, if you need beer … come to me, I'll buy you beer. You don't need to steal a truck." (Johnson also spoke to WHDH, telling the outlet that he told his son that he didn't know why someone would steal a beer truck. "Maybe he needed to throw a party? I don't know," he said.)

The Providence Journal reports that Fellela's alleged beer run also violated the terms of his release for a previous incident, so he is being held without bail. Earlier this year, he was charged with four counts of bank fraud.

Maybe it's unsurprising that he's not the only one to grab a silently idling opportunity with both hands. In April, 34-year-old Joshua Karpe allegedly took off with a Frito-Lay truck that had been left running in a gas station parking lot. He made it almost 100 miles across three counties in Oklahoma before officers from the Oklahoma City Police Department, the Enid Police Department, the Oklahoma Highway Patrol, and the Garfield County Sheriff's Office caught up with him.

"I would love to know the motivation of stealing a truck that's very, very easy to spot and doesn't go very fast," Capt. Jeff Spruill of the Oklahoma City Police Department told KFOR. "What do you think you're going to do with a truck like that?"

Hey, Steve Winwood just says to take a chance, he doesn't explain what you're meant to do after that. 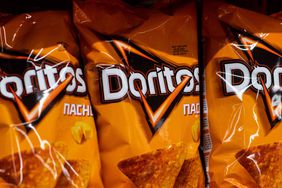