The support animal's owner said he believes Patrick is "the first pony mayor in the U.K."

The United States was founded in 1776 — a relatively new country all things considered — and our approach for choosing officials is pretty straightforward. If a city needs a mayor, the people elect a human to do the job (aside from a few dogs who have gotten the job). But England's been around since 927 and doesn't always feel the need to follow modern rules: an island can have its own king, a town can have an official ale taster, and a village can name a beer-drinking pony as its mayor.

The village of Cockington, located in the southwestern English county of Devon, has appointed a miniature Shetland pony named Patrick as its unofficial mayor after he became a local celebrity in part thanks to his stout-drinking trips to the local pub where he has his own special space set aside to sip on Guinness.

Patrick's owner, Kirk Petrakis, reportedly began taking him to the The Drum Inn pub during the pandemic to help socialize him for work as a therapy pony. Patrick has since gone on to spread support around the region by traveling to hospitals, recovery groups, mental health wards, and schools, according to ITV.

With the previous unofficial Mayor of Cockington having passed away in 2019, a couple hundred locals launched a petition to give Patrick the position. "Patrick's fans thought that he deserved a title for all his hard work and jokingly suggested that he could be mayor, or even the MP, and then we just did it," Petrakis was quoted as saying.

Patrick's swearing in ceremony, where he was presented with a light-up mayoral chain, was attended by actual politicians, including local councilors Andrew Barrand and Hazel Foster as well as local Member of Parliament Kevin Foster, according to Devon Live. "We think Patrick the Pony has made history by becoming the first pony mayor in the U.K.," Petrakis said of the event that took place this past Saturday, adding that it was "a really lovely occasion."

If you think all this success might go to Patrick' head, don't worry, it already has. Patrick has his own Celebrity Pony website to show off his charity and therapy work, as well as social media accounts on Youtube, Facebook, Instagram, and Twitter. "He's actually saved people's lives through his therapy," Petrakis told Greatest Hits Radio Devon last week.

He sure sounds like a good pony. Somebody buy him a Guinness! 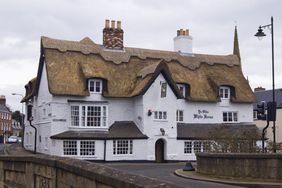