A 'Back to the Future'-Themed Bar Has Opened in Texas

McFly's Pub is a neighborhood bar with an '80s Hollywood theme.

Back before COVID-19 threw a wrench in the bar scene, America had no shortage of unofficial entertainment-themed watering holes. From early examples like 2015’s Will Ferrell-inspired establishment Stay Classy New York (R.I.P. to the bar, not the actor) to more recent openings like a Lord of the Rings tribute pop-up in Chicago and a Dolly Parton-nodding joint in Brooklyn, a nostalgic movie/TV/music theme can help get the word out about your new business.

Now, as the country tries to return to some level of normalcy, movie-themed bars are also apparently back in the mix. Fort Worth, Texas, has recently seen the opening of McFly’s Pub—the Back to the Future-themed neighborhood bar of ‘80s kids’ dreams.

“Evoking peak 1980s nostalgia, the bar takes its Back to the Future theme quite seriously, with Instagrammable murals depicting the film’s most iconic scenes and kitschy BTTF references like lights made out of vintage suitcases, classic ‘80s arcade games, a vintage flight simulator, propellers in lieu of ceiling fans, and even a mannequin dressed like Marty McFly propped on the bar’s roof,” a rep for the new bar explained via email.

“It has a retro ’50s interior and a lot of Back to the Future references,” Jay Wilkinson, a local artist who helped design the space, told The Dallas Morning News. “But McFly’s is kind of a double entendre because it’s located near the airbase. And there’s all kinds of weird stuff in there. It’s like a Chili’s and an episode of Hoarders.”

As far as drinks are concerned, the pub boasts 10 draft lines and 15 canned/bottled beers, but the real fun is the themed cocktails—things like the Gigawatt Shot featuring a mix of blue Curacao, tequila, and Malibu rum or the Great Scott, which is Johnny Walker Black with simple syrup, orange juice, lemons, and limes. And speaking of “Great Scott,” McFly’s even got an encouraging video from actor Christopher Lloyd back in July. “Someday I just might pop in, so be careful!” quipped Dr. Emmett Brown himself.

However, if Doc does pop in, for now, it won’t be literally inside. Due to COVID-19 guidelines, McFly’s—which is in the city’s Calloway Park neighborhood—is only allowing drinks to be consumed on its “spacious patio” (masks required) or be purchased to-go. Big bonus points if you pick them up in a DeLorean. 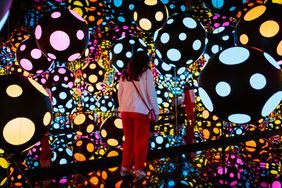 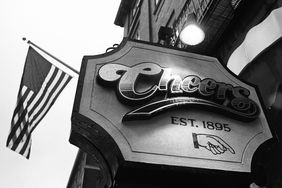