20 kegs and four pallets of beer and cider made their way to a local bar in Mallacoota last week.

On Monday, the Australian government pledged A$50 million ($34.58 million) to a program that officials hope will help its wildlife recover from the effects of the bushfires that have significantly damaged or completely destroyed their habitats. Reuters reports that the fires have wiped out 27.7 million acres of land, affecting an estimated one billion animals.

The animals that managed to survive the fires are still at risk in the days and weeks afterward, due to an increased difficulty of finding food. That's why the government of New South Wales has launched a mission called "Operation Rock Wallaby" to help that particular marsupial survive the aftermath of the fires. Officials from the National Parks and Wildlife Service (NPWS) have been dropping thousands of pounds of sweet potatoes and carrots out of helicopters over the parts of the state where rock wallaby colonies are located.

An Australian naval ship also took on an unusual assignment to help a (human) community in Victoria, where around 4,000 residents have been stranded after the road that leads in and out of the town was closed because of the fires.

Last Friday, the HMAS Choules made an unprecedented beer run, delivering almost 800 gallons of beer to a bar at the Mallacoota Hotel in Mallacoota. "The pub is at the heart of regional communities. And a pub with no beer is bad enough at the best of times," Peter Filipovic, the CEO of Carlton & United Breweries said.

"After what Mallacoota residents and fires have been through the least we could do is make sure they could enjoy a beer." (Carlton & United also reportedly pledged A$1 million to the country's disaster relief efforts).

The pub's management contacted both the County Fire Authority and CUB, to ask if there was anything that could be done about the town's rapidly dwindling beer reserves. "We were running low of supplies and a pub can't run without beer, can it?" Lou Battel, the owner of the Mallacoota Hotel told SBS News. "Every Australian needs a beer and definitely the emergency services working non-stop."

After loading essential emergency supplies onto the ship, the Navy agreed to transport 20 kegs and four pallets of beer and cider too. ("The beer is not occupying unnecessary space on HMAS Choules and essential supplies were not offloaded to accommodate the beer," a spokesperson for the Department of Defense said.)

The journey took around 20 hours, but the ship arrived safely in Mallacoota on Friday morning. Lieutenant Commander Nick Grimmer, a British Royal Navy pilot who has been working with the Australian Navy's disaster relief squadron told The Telegraph that the locals were "extremely pleased" with the special delivery.

"The Australians like a beer it turns out," he said. 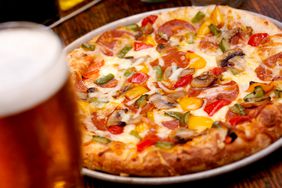