At Virtue Restaurant in Chicago’s Hyde Park, chef Erick Williams celebrates Black life. For him, that means not just highlighting Black foodways and culinary traditions, but also Black contributions to service, culture, and art. Williams started exploring the possibility of cooking southern food in a professional setting in 2012 while he was executive chef of MK the Restaurant, a since-closed fine dining spot from Chicago chef and restaurateur Michael Kornick. On the side, Williams was cooking dinners for art events that, as he puts it, “called for soul food.” As he honed his cooking style, he learned more about the art world—and the stories of Black artists. In 2018, Williams opened Virtue with a Southern American menu and a rotating collection of work by Black artists. The food Williams cooks works with the space he has created to tell a story of struggle, pain, sacrifice, ambition, resilience, beauty, and hope. — Nina Friend

I became really fascinated by art during my time at MK. There was an exposure to art and artists and these galleries where we would sometimes do dinners. I grew an appreciation for the beauty and the stories. Then in 2012, I had this opportunity to do a dinner for [Chicago artist] Theaster Gates.

The dinner turned out to be part of an art installation called Feast. Theaster would rehab a home in the middle of what would be considered a pretty rough neighborhood, so literally the whole house was art. These dinners would take place with all kinds of folks, and they would allow everyone to re-explore the possibility of community, and a community that people might not want to reinvest in, within the space, with food, with spoken word and performance art.

Theaster came by MK one night and I cooked him dinner and he was really appreciative, and he gave me a piece of art, which was totally unexpected. That was my first piece of art from a legitimate artist. That was the beginning.

Fast forward some years and I was looking at a space in Hyde Park for my restaurant, Virtue. The color we wanted to paint the walls is called Landlord White. That color means something to me because in Chicago, during the migration from the south, there were areas called redlined areas where African Americans were not allowed to own homes. [White] people believed that if African Americans owned homes, the values of their homes would go down. We were only allowed to rent, and the homes were painted Landlord White. Conveniently, every gallery and museum has white walls, because white does not compete with the tones of art, so the color had a dual meaning in terms of its significance.

I was in talks with Theaster and I was working with another young artist on a commissioned piece. Then one of my dear friends said they had some pieces they thought would go really well in the restaurant. Between the philanthropy of a friend, the piece I had commissioned, and Theaster, we essentially had art for the majority of the walls at the restaurant. I feel honored to be able to showcase this craft and this culture but I also feel very humbled that these artists have trusted me and trusted this space with their work. That wasn’t necessarily in the business model, to have super-cool art by these famous artists. I didn’t see that happening. Like a lot of projects, it has kind of taken on its own shape.

It’s a beautiful piece, but it confronts you.

Theaster, who frequents the restaurant, is involved in the curation and rotation of his own pieces. He has his own wall, and nothing’s going on that wall until Theaster gets tired. The piece from Theaster that is in the restaurant now is called Yellow Race Riot Hose. In his work, Theaster uses decommissioned water hoses from fire departments in the South that were used to break up race riots. This piece symbolizes force that was used on African Americans during race riots in the Civil Rights Movement, but its symbolism is unique to what’s happening right now. The whole world is dealing with a pandemic, and it’s also dealing with issues of race. We took down a lot of our art right before the looting started happening, in fear that we may lose something or something might get vandalized, but we elected to keep this piece hanging. The symbolism means something to us, to the artist, and we thought it might mean something to someone if they invaded the space. And though they wouldn’t know what they were looking at without context, we deemed it important for this work to be the first thing you were looking at it when you come into the building. It’s a beautiful piece, but it confronts you.

People ask me to talk about one piece more than all the other pieces. It’s the largest piece in the restaurant, and it’s the first piece that was curated for the space. It’s called Our Extended Relatives by Raelis Vasquez, and it was inspired by a photo from the 1950s of Langston Hughes, the poet and activist. I saw this photo of Langston where he’s in a room with friends and I sought to acquire it, but we couldn’t find a way to get the rights to it. Then I decided to reach out to Raelis and ask if he could create a painting inspired by it.

Several things were striking to me. First, the '50s were a very tense time for people because of the civil rights movement. Langston is an activist, so you’d like to think that he had some things on his mind, but in this setting, he looks totally relaxed. People are smiling, they have martini glasses in their hands. There’s a butler in the background, which states a level of affluence. Second, there’s a portrait of someone African American on the wall, and that did not happen very much. Generally when you see portraits, they’re of old white men. Last but not least, the painting represents diversity. There were a lot of shades in the room, from light to dark, and there’s something to be said about having a space that creates an opportunity for rich discourse.

I would argue that cooking collard greens is just as complicated as cooking a cassoulet.

To me, the really beautiful part about this photo is the fact that people are sitting on the floor. We wanted to open a restaurant that was so rich by way of service and culture that if you came in with your friends, you would be willing to sit on the floor so that you all could be together and celebrate your own existence. Obviously, we don’t ask people to sit on floors, but we do want that kind of feel. We took a lot of care to create a place that felt that comfortable.

Three of the pieces in the restaurant are called Chicago Is Iraq? by Amanda Williams. These sheets of paper have an outline of a map of Iraq. Inside of the outline is another map, a grid, and the grid is of Chicago’s toughest neighborhoods. It’s a play on the idea when people were calling Chicago "Chiraq." When the pieces were delivered, I didn’t know a ton about this particular work. It shows up to the restaurant and like a lot of works, you adjust them in a space without hanging them so you get an idea of what they would look like in a wall. I was like, oh they look great, so I didn’t take the time to fully appreciate the details. Austin and Lawndale were two of the Chicago areas that are portrayed, as well as Woodlawn, which is not that far from the restaurant. It was just a humbling moment to see this kismet space that I was in, because how could Amanda have known that those were neighborhoods that were near and dear to me?

There is a very compelling portrait in the restaurant done by a famous photographer by the name of Dawoud Bey. Mr. Bey brought in a piece that was staged in the early 1990s called Couple in Prospect Park. I had the opportunity to stand and look at this piece with him. He personally came by to hang it, which artists never do. It was one of the coolest moments I’ve had in the space. Afterward, he said, “This piece means, when nothing else matters.”

Ephrem Solomon, an Ethiopian artist, painted a piece on wood called Recycle Series (8), 2018. He wanted to catch people in their natural expressions, and he catches this moment of this African American woman and paints her in black. She is looking to her right. Where the painting is hung in the restaurant, it looks like the works are hung to the right of this painting as you go around the room. There was a piece there before that was called Make Peace by the artist Cheryl Warrick. As we get excited about new things we rotate the works, because all art doesn’t complement the next piece.

A few years ago, the artist Kerry James Marshall was recognized for a retrospective of his work over many years, and the show was on display at the Museum of Contemporary Art in Chicago. I was there during the opening and then I walked the show another time, and I was so moved by it that I wanted my chef de cuisine to see the show. We didn’t see it in order. We went in and skipped some parts and went to the middle and came back. Part of the show was an interview with Kerry where he talked about mastery—which was the name of the show. To paraphrase, Kerry talked about how when he was a young painter studying art, there were not subjects that were black. They were all white. And he was affected by that because there was a story to tell about subjects that looked like him, except that wasn’t readily embraced or encouraged. Once he mastered that art, he was in a place where he could change it.

That’s partly a story that I share. I learned how to cook Italian and French. French was identified as the foundation of cooking, but here at Virtue, I’m being celebrated for southern food. I would argue that cooking collard greens is just as complicated as cooking a cassoulet. 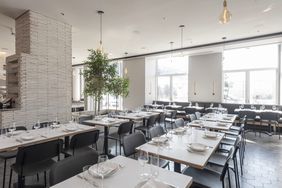 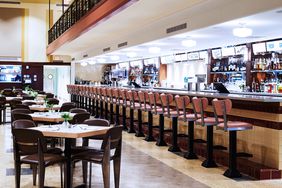 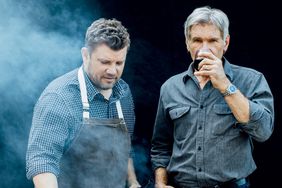