Originally imported to manage algae, their new menu-friendly name will be revealed this summer.

On the United States Geological Survey's (USGS) website, it has several FAQs related to Asian carp, ranging from "What are Asian Carp," to "Are Asian Carp Dangerous?" and "Can I eat Asian Carp?" When it comes to that last question, the USGS says yes, the fish have a mild flavor, are low in fat, and make "excellent table fare," although even the most enthusiastic fish-eaters can be put off by the number of tiny bones that can be found in each fillet.

Asian carp—a blanket name that is used interchangeably for the bighead, black, grass, and silver carp—are, by most accounts, a tasty and healthy fish, but you're not going to find them on many restaurant menus. The state of Illinois is trying to change that, and one of its first steps is to do something about the fish's name. According to USA Today, a new name for the fish has already been proposed, and it will be revealed this summer, just before the Boston Seafood Show.

"To us in America, we think of carp as a bottom-feeding, muddy-tasting fish, which it is sometimes," Dirk Fucik, the owner of Dirk's Fish and Gourmet Shop in Chicago, told the outlet. "But Asian carp is a plankton-feeder. It's a different type of flesh—much cleaner, sweeter-tasting meat."

Asian carp have become an increasingly big headache in the United States. They were imported into the country in the 1970s to eat the algae at wastewater treatment plants, and to help clean up catfish ponds. Flooding and other water-related accidents helped them escape from those controlled environments, and they're now found in the Missouri and Illinois Rivers, and Illinois is doing everything it can to keep them out of the Great Lakes.

The idea of reducing the Asian carp population by putting them on American plates has been proposed before, but it's been a hard sell so far. Clay Ferguson, a Ph.D student in Virginia Tech's Department of Food Science and Technology admits that the word 'carp' is off-putting, because people tend to think of that fish as being 'dirty.'

"It's a misconception that we're trying to get past," Ferguson told the Augusta Free Press. "Silver and bighead carp [...] don't rummage through the mud."

Last fall, Josina Morita, a commissioner with the Metropolitan Water Reclamation District and member of the Great Lakes Commission, launched the Asian Carp Challenge, which is an "ecologically sound" initiative to get Chicagoans to give the fish a try. (Its slogan is "If you can't beat 'em, eat 'em.")

As part of the Challenge, she worked with the Midwest Fish Co-Op and the Illinois Department of Natural Resources to try to get 1,000 people to eat Asian carp for the first time. "I don't know if we'll be able to eat our way out of the problem, but it will buy us time," she said. "It slows their progression north while we work on structural solutions."

Giving a fish species a PR-friendly makeover isn't exactly unheard of. In 1970, the U.S. National Marine Fisheries Service rebranded the carnivorous deep-sea Slimehead as the more palatable Orange roughy. And Lee Lantz, a Los Angeles fish wholesaler, is credited with rebranding the Patagonian toothfish as Chilean sea bass. Meanwhile in England, the Cornish Fish Producers Organisation (CFPO) are trying to give two of their own ocean dwellers a more appealing glow-up. The CFPO is planning to "relaunch" the megrim fish as Cornish sole, while spider crabs will become Cornish king crabs.

Regardless of what we end up calling Asian carp, it's still going to taste the same—and according to its proponents, we're going to like it. "They have white, flaky meat that's mild, not very fishy, and take to most any seasoning," Clay Ferguson said. "If you are one of the few who try and don't like Asian carp, that fish was either poorly handled, overcooked, or you just don't like fish." 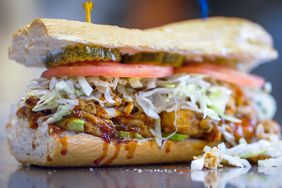 What Is Copi? A New Name for an Invasive Fish