Like many brands, Arby's has put an emphasis on stunt marketing in recent years — and to help emphasize its "We have the meats" slogan, oftentimes Arby's advertising takes an alpha dog attitude. In 2019, the chain said it would never go plant-based, even creating a meat-based carrot. Earlier this year, Arby's got rapper Pusha T to record a McDonald's diss track. And last year, the brand released their first booze: two different French fry-flavored vodkas.

This week, Arby's is once again going the liquor route — releasing its own meaty spin on a spirit that has long had a reputation for putting hair on your chest: Prepare yourself for Arby's Smoked Bourbon.

Billed as a chance for Arby's to bring "its smoked meat expertise to bourbon," this limited-edition whiskey is "smoked with the same real woods — hickory, mesquite, and pecan — used to smoke Arby's meats from Sadler's Smokehouse in Texas, creating Arby's signature flavor." Specifically, the chain says its Arby's Smoked Bourbon takes inspiration from their 13-hour Smoked Brisket sandwich and their limited-time only, 8-hour smoked pork Country-Style Rib sandwich.

The resulting 90 proof spirit was produced by Brain Brew Custom Whiskey in Newtown, Ohio, by taking Arby's smoked American oak, placing it in the bourbon, and then "WoodCraft" finishing it by heating and cooling the liquid to "replicate the variation of temperature through the seasons."

"After our successful vodka launch last year, we knew we wanted to release another unexpected liquor that our fans of legal drinking age can responsibly pair with our menu items," Jim Taylor, president of Arby's, stated. "Arby's smoked meats are the cornerstone of our brand, so why not use our expertise to create a delicious smoked bourbon that complements the flavors and enhances the experience of enjoying our Smokehouse Sandwiches?"

Meanwhile, Brain Brew CEO and co-founder Doug Hall said his company was "thrilled" to partner with Arby's. "We take pride in the hours of research, detail and innovation that goes into creating custom bottles of bourbon for our collaboration partners as well as consumers," he said, "and enjoyed recreating one of Arby's signature flavor profiles using the same smoked woods that they use at Sadler's Smokehouse."

This bourbon will initially go on sale exclusively at ArbysSmokedBourbon.com on Wednesday, October 19 at noon ET with bottles selling for $60 plus tax. That will be followed by a second drop, and fans are encouraged to sign up to become an Arby's member before the first release to be notified of when the second drop will happen.

Also available will be a limited-edition cocktail smoker shaped like the Arby's hat "so you can smoke your drinks the way Arby's smokes their meats," the company writes. (Though I am pretty sure Arby's doesn't smoke their meats in a hat!) The cocktail smoker is set to sell for $50 plus tax and shipping.

Regardless of which release you go for, be prepared to pound on that refresh button. Arby's says its previous bottles of booze — their Crinkle Fry and Curly Fry Vodkas — both sold out in under two minutes. And a quick search of eBay reveals that even an empty bottle is listed as having been resold for $125. Bourbons tend to be even more coveted than vodkas, so expect this new release to go quickly, too.

However, there is one more noteworthy opportunity for disappointment: Arby's Smoked Bourbon is only available to residents of California, Colorado, Florida, Kentucky, New Hampshire, New York, and Washington, DC. 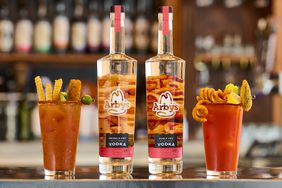