About 1.4 billion pounds of cheese is waiting in storage to be eaten.

If you're a big fan of common U.S.-produced cheeses like cheddar or American, you'll appreciate knowing that we have more than enough to go around: A record 1.4 billion pounds of primarily these kinds of cheeses are currently flooding cold-storage warehouses as the U.S. faces its largest cheese glut since the government first started tracking this sort of thing a century ago, according to the Wall Street Journal. The number has continued to grow over the course of 2018, up 10 million pounds from back in the summer. But while cheese lovers might like the sound of massive cheese stockpiles, all that excess cheese is hitting the dairy industry's bottom line.

So what gives? Who doesn't like cheese? The problem isn't so much a lack of interest in cheese in general, but in American-style mass-market cheeses specifically. The WSJ reports that ongoing tariff issues with Mexico and China have dropped cheese exports 10 percent and 63 percent respectively as these countries turn to other options. Meanwhile, Americans reportedly aren't so into American-style cheese either. Instead, ironically enough, Americans are continuing to turn to more imported cheeses (tariffs be damned, apparently), as well as natural cheeses and other, more upmarket, American-produced varieties. Specifically, the WSJ says that America's per capita consumption of processed cheese spreads is half of what it was as recently as 2006.

As a result of these trends, prices of wholesale cheddar are down 25 percent over the past four years. But that's not as bad as milk prices, which are down about 40 percent over the same period. But though profits may be down in the dairy industry for now, a spokeswoman for the Ireland-based global cheese producer Glanbia told the WSJ that they're not worrying just yet. "While cheese markets can be inherently cyclical in nature, long-term trends point towards a rise in global dairy consumption," she was quoted as saying. Uh, with all that extra cheese lying around, it sounds like global dairy consumption needs to increase whether we want it to or not! 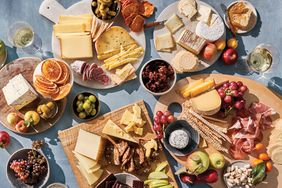 Why America Is Stockpiling Tons of Bacon