It's imported, it's very affordable—but does it taste good? We put the fast-growing supermarket chain's luxury range to the test.

For millions of people around the world, German discount supermarket chain Aldi has long been a part of daily life. Americans, however, took an awfully long time warming up to the relatively uncool relation (don't ask, it's a little complicated) of Trader Joe's. Not that Aldi wasn't working hard to win us over—the very first store on American soil opened up way back in 1976, and there are now 1,600 stores in 35 states, with plenty more on the way.

Are you new to the brand? It's a pretty easy concept to follow—in exchange for big, attractively-lit stores with salad bars, coffee shops, and an abundance of people asking if you are finding everything that you need, Aldi promises to deliver quality product (typically from brands you will probably have never heard of) at an exceedingly reasonable price. Mostly, they do just that—daily staples like whole milk, eggs, cheese and bread can often be snapped up for a lot less than you'd think. The real genius of Aldi, however, is tucked away in the details.

As a European company with a lots of European suppliers, Aldi manages to surprise many first-time shoppers with the number of imported goodies it manages to squeeze onto those groaning shelves—organic preserves, cookies, and, of course, chocolate. Aldi sells a lot of chocolate. Anyone familiar with the European supermarket experience knows that over there, supermarket chocolate is, even at the lowest rung on the ladder, often a nice step up from the grainy, over-sugared stuff we're mostly raised on in the United States, and often at prices that can seem too good to be true.

Curious as to whether or not cheap German supermarket chocolate would taste quite as good on American soil, I stopped in and snapped up every single bar I could find within Aldi's upscale range, manufactured under the historic Moser Roth brand by a German conglomerate, the same one that does Werther's Originals and Riesen candies. At $1.99 for 4.4 ounces, it's definitely one of the better chocolate bar buys out there. But would it taste good?

To put the bars (and a generously-sized box of truffles I threw in for good measure, because at $3.99, why not) to the test, I assembled a group of three willing tasters in an American city without an Aldi. One was an accomplished pastry chef that spent years running her own bakery, another a career food writer that had recently taken a chocolate tasting course. I didn't give them any of the details, and I definitely didn't give them the prices. All I wanted to know was, is this good chocolate? Boy, were they honest.

The packaging promised "a delicious treat for connoisseurs of sophisticated gourmet chocolate," using the "finest South American cocoa." Mostly, everyone went straight for the jugular. They figured out that it was European, but they could for sure taste the additives. "I don't know if adding vanilla powder is cutting corners, but it's definitely adding a flavor that you don't need to have in there, if you've got good quality beans," said one taster. Everyone noticed the not insignificant amount of cocoa butter in the bars, giving the chocolate that pleasant slip in the mouth so common to European chocolates.

The first thing everyone commented on was the sugar content. "I like milk chocolate, but this one's too sweet for my tastes." "The minute I put this in my mouth, I knew it was cheap—this tastes like $3 chocolate." (Close, but not quite!) Strong reactions aside, everyone agreed that this is a pretty decent example of a baseline European milk chocolate bar, but all four of us could remember tasting better in that category.

Everyone guessed this one as around 50 to 60 percent dark, and some couldn't even taste the chili, which was more like a dusting of cayenne pepper in a mix of perfectly okay chocolate. There was some heat on the back end, but it felt fake, and certainly a little faint. "Once again, a heavy hand with the sugar—they need to sit back and let the cocoa do its job." We all agreed—this one was a dud.

These come in a box of twelve, with a variety of different flavors, and are quite popular with Aldi shoppers, at least overseas. Our tasters started with (and hated) the strawberry rhubarb truffle, which wasn't really chocolate at all. "That tastes like soap!" The entire group declined to taste further, but if they had, they'd have gotten to the chocolate truffles filled with soft, milky caramel that were actually quite good.

Now we were getting somewhere. By American standards, this bar was actually far less sweet than it might have been—one taster remarked that it reminded them a lot of Ghirardelli chocolate, and meant it as a compliment. (Again, they didn't know this, but Ghirardelli is more expensive.) While everyone preferred this to the milk chocolate, I didn't tell them that the Dark Sea Salt actually had two-thirds more sugar per serving, which they possibly missed because of the pleasant bitterness of the dark chocolate, along with the perfect amount of sea salt crunch that balanced everything out. This one, our tough judges had to admit, was a definite winner.

"Oh wow, I like this one a lot—the fruitiness of it, the little bit of acidity there." "I like the way they didn't over roast it." "It has a teeny bit of that ashtray taste, but it's creamy and delicious." Everyone said it reminded them of European supermarket chocolate, which we all agreed tastes way better than most American supermarket-standard chocolate. The Dark Sea Salt may have been a very close runner up, but everyone felt this was the one they'd go for again. A clear winner had been found.

For comparison, we tasted a variety of other bars, from the trendy brand Compartes ($9.95 for 3 oz.) to an Alter Ego Dark Salted Brown Butter bar ($8.25 for 2.82 oz. on Amazon), to a humble Ritter Sport square ($2.59 for 3 oz. at Target). The Ritter Sport tasted just as sweet, if not sweeter, than everything we'd tried, while everyone agreed that the Alter Ego wasn't much better than the Moser Roth Dark Sea Salt. As for the Compartes, well—putting a bar of Compartes next to any other kind of chocolate is kind of ridiculous; that stuff's in a class of its own. While everyone was eating these more expensive chocolates and talking about how they mostly preferred them, I finally told them how much I'd paid for the Moser Roth chocolate—again, just $1.99 for 4.4 ounces, $3.99 for the twelve truffles. Everyone expressed surprise, immediately softening up and admitting that these had actually been very good quality and value for chocolate purchased in an American supermarket. Without hesitation, though, they all said they'd probably stick to the 70% Dark, followed by the Dark Sea Salt. Definitely follow their lead, but maybe don't write the truffles off quite so quickly—those were pretty good, too. 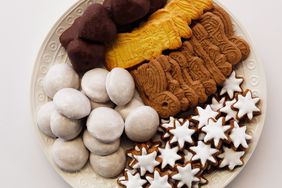 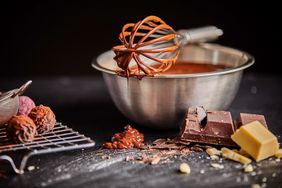