On the latest of many visits to Mexico's Yucatán peninsula, a top chef is inspired anew by the unique cuisine. In between visits to Mayan ruins and snack shops, she creates recipes in a beautiful hacienda.

It's early morning at the Mayan ruins of Uxmal on Mexico's Yucatán peninsula, and chef Patricia Quintana and I are the only people in sight. From our vantage point high on the steps of the crumbling Palacio del Gobernador, we see massive gray stone structures with fantastically carved serpents and masks all around us. There is nothing that an ancient Mayan wouldn't have recognized—except for us, that is.

"You see," says Quintana as we make our way down the steep, uneven stones, "before the tour buses arrive, you can almost feel what it would have been like for the Mayans before the conquistadors."

Quintana, the chef and co-owner of Izote, one of the hottest restaurants in Mexico City, is passionate about tracing Mexican cuisine back to its pre-Columbian roots. She's especially fascinated by the Yucatán, where she's made dozens of trips over the past quarter century to research her 14 cookbooks. Yucatán cuisine is distinctive partly because the region was geographically isolated from the rest of the country for centuries, Quintana explains as we head toward the market in the capital of Mérida, on the northwestern side of the peninsula. Our driver speeds along the Paseo de Montejo—a broad avenue lined with faded colonial mansions in varying states of restoration. This part of Mérida, just outside the center of the city, is architecturally reminiscent of Havana: The Yucatán peninsula juts into the Caribbean Sea, so Mérida is actually closer to Cuba than it is to Mexico City.

The Spanish influences on the cuisine are strong—the conquistadors arrived in the 16th century—but so are those of the Mayans, whom the Spanish were never quite able to obliterate, despite their bloody efforts. Northern Europeans have left their legacy too, particularly the Dutch: Holland was an active trading partner in the 19th century, when Mérida was the center for the production of henequen, a fiber traditionally used for making rope.

"The corn, the chocolate and the honey, the venison and wild turkey, squash, cucumbers, chiles and tomatoes are from the Mayans," Quintana says. "The pork and Seville oranges come from Spain, and the Edam cheese from the Dutch."

Edam? It sounds strange, but as we enter the dim, narrow lanes of the huge covered market, I see balls of Edam and Gouda everywhere, piled into pyramids next to dozens of bins of earth-toned recados, the ubiquitous herb-and-spice pastes. Quintana stops in front of the tubs of recados. "Each one of these is for a different dish, and people buy a few cents' worth to use that day," she says.

I lean over to catch a whiff of a ruddy paste made of annatto and other spices. The scent, musky, sharp and very intense, is completely different from the nutty, grassy odor of the greenish one next to it, made of pumpkin seeds, or the peppery aroma of the brown paste behind it. "The dark one is a spice paste made of cloves, black peppercorns and other spices and tastes of earth and fruit," Quintana explains, raising three manicured fingers to her lips as if she were tasting it. "It's for pavo en escabeche—spice-rubbed turkey. There's a touch of vinegar in the sauce and a lot of onions and garlic. When I make it, I serve it with a roasted green-chile sauce and warm, soft tortillas."

This passion for cooking developed at an early age. The daughter of cattle ranchers, Quintana grew up in Mexico City and spent summers in Veracruz running barefoot through the houses of the workers, who would always give her a little treat—a sliver of pork, a nibble of tortilla, a ripe piece of fruit.

"I wanted to be like them," she confides. "I couldn't, of course, but I could learn their recipes, which define the essence of a person." So, with every gift of food, she began asking, "How do you make this?" And she would stay and watch the women cook every morning, moving from one house to the next to learn something new.

Watching Quintana maneuver quickly from stall to stall in the market, it's easy to imagine her as a little girl, inquisitive and earnest. Even as an adult, her efforts are rewarded with morsels of food. By asking an older Mayan woman wearing a hipil (a traditional white embroidered dress) about her roasting method, she talks her way into tastes of cochinita pibil, the pit-roasted pig marinated in sour Seville orange juice, garlic and that intense-smelling red recado made from annatto seeds.

"Before the Spanish introduced pigs," Quintana says as we eat the tender shreds of pork with pink pickled onions, "the Mayans pit-roasted venison with a similar recado. At Izote, I sometimes use the same paste for ribs."

This snack whets our appetite, but it's only 11:30, too early for lunch. So instead we head back to the Paseo de Montejo, and go to Dulcería y Sorbetería Colón, a sorbet shop and café where hordes of schoolchildren usually congregate in the afternoon. We pick five flavors of sorbet—including nance (similar to a yellow plum), saramullo (a tropical fruit that tastes like honeydew) and a fantastic sweet corn—and the house specialty merengue, puffy pyramids that are soft inside but have crunchy brown tops. We also share a few rich, nut-colored shortbread cookies called polvorones, which are made with toasted flour and brown butter.

Afterward, we walk around the 16th-century Plaza Grande, Mérida's central square, where visitors come to see the colonial Spanish cathedral, the Casa de Montejo (a faded stately mansion converted to a bank) and a museum of contemporary Yucatán art. Snaking our way through the alleys behind the plaza, we end up at La Prosperidad, which specializes in botanas (little snacks), with a thatched roof and a band playing the greatest hits of Mexican pop. Occasionally, a diner gets up and sings, swaying arm in arm with the bandleader, a jeans-clad crooner in a Panama hat. Quintana orders us a round of micheladas, a tangy mix of lime juice, Worcestershire sauce, Tabasco and good, dark Yucatán beer. "It will bring your appetite back," she promises me.

A good thing, since the botanas that come out are irresistible; they include papadzules, hard-cooked eggs wrapped in corn tortillas with pumpkin-seed sauce and sopa de lima, a chicken-tortilla soup that's flavored with a fragrant local variety of sour lime. We eat all of it with xnipek, the ubiquitous table sauce of habanero chiles, scallions, citrus juices and cilantro. Xnipek translates to "dog's nose"—it's so spicy, one's nose starts to run after eating it.

By the time we leave La Prosperidad, it's started to rain, so we decide to head back to our hotel, the Hacienda Xcanatún, about 20 minutes outside the city. After drying off in my room, I meet Quintana at the hacienda's bar and order the house cocktail, an icy margarita-like concoction made with the local anise-and-honey liqueur called xtabentún. A few minutes later, Cristina Baker joins us. Baker and her husband, Jorge Ruz, bought the 18th-century hacienda eight years ago and spent five years restoring the property, creating 18 suites, each with its own terrace, while keeping much of the traditional stone buildings intact. (In Mayan, xcanatún means "tall stone house.") Once part of a henequen-producing estate, the hacienda was abandoned in the 1950s or '60s after the introduction of synthetics for ropemaking reduced the demand for henequen. Many such estates throughout the Yucatán have been bought by young entrepreneurs and turned into small hotels and restaurants.

As we discuss our plans for the next day, Quintana says she must try the queso relleno, a stuffed cheese rind that's a Yucatán delicacy. "Queso relleno is really the hollowed-out Edam cheese," Baker tells us. "The soft part of the cheese, the center, was scooped out by the patrón, the boss. The servants got the rind, which they stuffed and steamed."

Baker says that Reyna Gallegos, her friend's Mayan cook, makes a fantastic queso relleno and she arranges for her to cook with Quintana the next afternoon. So in the morning, Quintana and I head to Izamal, a colonial town built on top of the ruins of a Mayan city that was dedicated to the sun god, Kinich-Kakmó. After the Spanish invaded, they used the stones from the temples to build an ochre-hued cathedral. If you look at the floor, you can see a carved mazelike pattern, a hallmark of Mayan design. Around town, hulking Mayan ruins still stand, pyramids of grey punctuating the green landscape.

For lunch, Baker recommends the restaurant Kinich-Kakmó, which has a traditional oval-shaped Mayan hut in the back garden. There's a pleasant shaded garden, but we choose to stay inside, where two Mayan woman are making tortillas over an open fire.

"You can see the irregular pieces of corn in the masa—you know this is stone-ground by hand," Quintana says. These tortillas, which taste of fresh toasted corn, smoky from the fire, are steamy and wonderful; they're delicious fried and served with the vinegary turkey en escabeche.

When we return to Hacienda Xcanatún, Gallegos is already in the kitchen, an apron tied over the elaborately embroidered hipil she made herself. Her Spanish, tinged with a musical Yucatán accent and riddled with Mayan words, is hard for me to understand. But it's easy to follow her deft hands as, over the next two hours, she scrubs and trims the cheese rind to leave only the thinnest shell, then fills it with a near-black mixture of ground beef, raisins, olives, almonds and spices that have been fried together until nearly caramelized. The stuffed cheese rind, wrapped in cheesecloth and banana leaves, is then steamed until the inside turns molten and runny. The patróns didn't know what they were missing.

Before we eat, Gallegos stoops over the food she's prepared and pauses to recite a prayer in her low Yucatán patois. Half in Spanish and half in Mayan, her blessing—over the Dutch cheese—is fitting for a cuisine and a region that, over the centuries, have evolved into their own compelling hybrid of so many cultures.

Melissa Clark's 14 cookbooks include The Last Course, with Claudia Fleming, and East of Paris, with David Bouley. 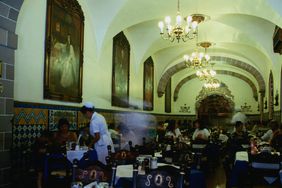