After nearly 20 years of working in restaurants, she'd sworn off professional kitchens. Then she met Misty Callies. Here, Gabrielle Hamilton explains how one woman made her the chef she is today.

When I met Misty Callies, my reluctant mentor, who inadvertently shaped me into the chef I am now, I'd left New York City, paradoxically, to escape from cooking. After soldiering through nearly 20 years in second-rate kitchens, starting as a 12-year-old dishwasher at a tourist restaurant in my Pennsylvania hometown, I had somehow gotten a spot in the master's program in fiction writing at the University of Michigan. So, in 1995, I packed a U-Haul and rolled into Ann Arbor to start a new, clean-fingernailed life.

I unpacked the U-Haul, registered for classes and immediately took a part-time job cooking to help pay the rent. When Misty hired me, she was grilling boneless chicken breasts for a U of M tailgate party, wearing a stained V-neck T-shirt. Not more than 10 years my senior, she was the tired, taciturn, slightly beaten chef of a perfectly decent catering company in a university football town where grown men wear maize-and-blue parkas and golf socks and will not venture beyond salmon and filet mignon, cooked to death and preferably covered with melted cheese.

At the time, I knew nothing about academic fiction-writing obsessions like "narrative strategy" or "diction," but about food and cooking I thought I already knew everything—knives, burns, 20-hour days, gold leaf in Champagne flutes, ring molds, braziers, butter rosettes and blowtorches. Working quietly across from Misty under the fluorescent lights, I had, I estimated, nothing to learn from her. She was not French or male or wearing a toque or blowing sugar into fragile candy shells to be filled with mousse. She was, rather, assembling rigid, odorless domestic cheese platters for university functions. I had a 25-pound knife kit brimming with tweezers and Q-tips, fish spatulas and needle-nose pliers. I had cooked for the king of Thailand.

But Misty had a couple of tricks of her own, which aren't found in a knife kit. Most importantly, she knew the difference between what she did for a paycheck and what she did at home. At her farmhouse, which is part of a land conservancy started by her husband, Bill, and some friends and neighbors, Misty was her real self as a cook; there, she was an organic gardener on a scale just two mules shy of farming. At work, she communicated in vaguely disapproving grunts (I have never met a person who could not talk the way Misty could not talk), but at home, she eked out full sentences. With my first invitation to dinner at her place—brined chicken, barbecued on a charcoal grill and served on the sunporch with some excellent rosé—I began to feel the stirrings of a remote past, of a someone I had meant to become a hundred restaurant kitchens ago. The second meal, with grilled sardines and rhubarb from her garden, transported me to a place I hadn't been to in so long, I didn't even remember it existed: my own home in my own childhood. Misty's bumpy, misshapen tomatoes ripening on the back steps, her cabbages shredded and broken down with salt, her hunks of pork swimming in smoky, earthy juices—all of these began to revive in me the girl I was when I first learned about food, when my family ate rustic, simple dishes that connected to our rural French heritage.

At Misty's house, and by her example, I relearned how to cook for myself, purely for pleasure and not for commercial consideration. Together we ate dark, oily fishes like bluefish and mackerel. She made duck prosciutto and confit. Every fall she emptied the garden and pickled and canned enough to fill a room in the cellar with hundreds of Ball jars. We made cornichons with the tiny yellow blossoms sometimes still attached, and Concord grape juice. She deep-fried with as little hesitation as you or I might brew coffee. The artisanal cheeses she ate at home sat out on the counter unwrapped and stank and oozed. And always, always, she offered guests a well-made cocktail.

At work, Misty and I continued to grind out salmon pinwheels and balsamic-glazed chicken breasts, and she maintained a taciturnity of impressive measure. At school, I found myself in the mostly unbearable company of pale academics, who sat around the grad-student lounge endlessly discussing "post-Hegelian moments" and "Barthesian tropes." I was gunning the motor of my car to get off campus each day and get to my job as a cook, which I was distinctly starting to prefer.

And then she left. In 1996, Misty walked out the door of the catering company and, with her brother as co-chef, opened Zanzibar, a pan-tropical restaurant with dishes from countries around the equator. To get her hands on new ingredients, and to read incessantly about unfamiliar dishes and cultures, gave her demeanor a brightness that made the stained T-shirts she still wore seem almost clean. Within weeks, she was happily exhausted rather than hopelessly worn down; she was almost talkative. I quit the catering company and ran after her. For the first time I tried picadillo, the slightly sweet ground meat hash popular in Spanish and Latin countries; and chimichurri, the green Argentinean sauce with chopped herbs; and asafoetida, a pungent, sulfuric Indian flavoring. I was deeply impressed not only by being exposed to new things, but also by how thoroughly Misty had done her homework, with her piles of books marked with yellow tabs. We tested dishes over and over until we got them right or as close to right as Misty could get. She found a local tortilla maker, and she persuaded the famous Michigan store Zingerman's to make chipotle challah for her rock-shrimp club sandwich.

Working with her at Zanzibar taught me how to run a restaurant. It was the first time in 20 years I'd heard a chef say "I don't know, let me look it up." It was the first time I'd seen a chef solicit the opinions or ask about the experiences of her staff. If the dishwasher's mother made posole for every family reunion, Misty would ask him about it. She ran her kitchen without insults or humiliations or fraternity-like hazings.

The restaurant flared, but then sputtered, and now smolders along like Pennsylvania's great Centralia coal-mine fire, which still burns more than 40 years after its first spark. Misty is still the chef, but Michiganders, it seems, were not ready for such unfamiliar foods, and within a year, Zanzibar's owners made Misty "reconceptualize." Although she was able to refuse to sell nachos, she had to cave on the Zanzibar Caesar salad with chipotle challah croutons ($5.95; $9.95 with grilled chicken breast, crab cakes or salmon).

In 1999, I returned to New York City with my new degree and ditched it. I opened a restaurant, Prune, and started cooking all of—and only—the foods I wanted to eat at home: trickless, gadgetless and pretenseless. I feature in my restaurant everything I grew up eating—the duck-crackling omelet for dinner, the calves' brains with brown butter, the Swiss chard from the garden, the lumpy tomatoes still warm from the sun. And all of the food goes directly from the stove to the plate, cooked by one person, using tools no more complicated than a spoon and a sauté pan and a pair of clean hands. I run my kitchen much as Misty runs hers; Prune is everything she reconnected me to.

I can hear Misty's protesting, self-effacing grunt every time I even try to introduce her as my mentor, but she remains the person I look to and listen to most. I visit her at the farm about twice a year for delicious dinners and to exchange new ideas or dishes, like manti, the tiny Turkish ravioli. These dinners can last well into the night, with fluid, effortless conversation as the Michigan breeze rustles the Concord grape vines, under which I have buried my 25-pound knife kit and my university degree.

Gabrielle Hamilton is chef and owner of Prune in New York City. 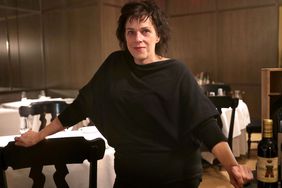