A bottle of Scotch may seem like an unconventional gift to give a one-year-old… and a two-year-old… and a three-year-old…. But after 28 years of receiving bottles of whisky from his father on his birthday, one English man is proving it's not such a bad investment: He's selling the entire collection to help buy a house.

Starting with his first birthday in 1993, Matthew Robson—from the English (not Scottish, surprisingly) town of Taunton in Somerset—has received an annual bottle of The Macallan 18-Year-Old Single Malt whisky from his father Pete, according to the BBC. Giving a little kid such a large supply of booze might seem strange, but apparently Pete had some foresight. "I thought it was quite a quirky little present as I was slightly too young to start drinking," Matthew was quoted as saying. "But I was under strict instructions, never, never to open them and I tried my hardest and succeeded and they're all intact."

Over the years, Pete believes he's only spent about $6,500 on the now 28-bottles of birthday whisky, but Matthew reportedly has his eyes on home ownership, so he's put the entire collection up for sale: current estimated value, well over $50,000.

As any whiskey collector (or regular Food & Wine reader) knows, the value of high-end whiskey—especially Scotch—has skyrocketed in the past few years, and, luckily enough for Matthew, The Macallan has been one of the top-selling brands on the auction circuit. In fact, Macallan has been repeatedly breaking its own records for the most expensive bottle of whisky ever sold.

But Pete told the BBC he didn't necessarily have this all mapped out when he started. The first bottle—dated 1974—was simply to "wet the baby's head." After that, he explained, "I thought it would be interesting if I bought one every year and he'd end up with 18 bottles of 18-year-old whisky for his 18th birthday… It wasn't the only present he got from us. It was just meant to be a unique present but it was a little bit of luck that we kept it going."

As for when Matthew might be able to make that down payment, whisky broker Mark Littler—who is selling the "perfect set" of 18-Year-Olds on Matthew's behalf—told the British news site that he's had "a lot of interest already." "The value of Macallan has risen massively over the last five to ten years," Littler was quoted as saying. "To have such a vast collection of bottles is the real selling point of these."

Suddenly, all those Nintendo 64 games your parents bought you seem like a real waste. If only dad had gotten you hard alcohol, you could be rich by now! 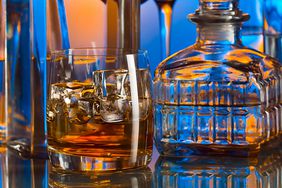 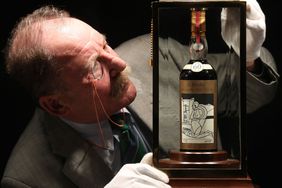