A 30-second guide to 30 years in food history: important chefs.

Debut America's most lauded chef unveiled his French Laundry in 1994 in Napa.

Lasting Impact Keller deftly melds the classic and the creative to astounding effect at Per Se in NYC and at Bouchon bistros and bakeries in Napa, New York and Vegas.Photo © Deborah Jones

Debut Turned farmers into heroes at Berkeley's Chez Panisse, which opened in 1971. 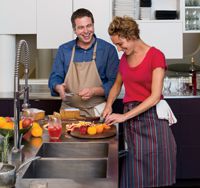