New York, NY (April 3, 2008) — Who are America's next superstar chefs? Food & Wine Editor in Chief Dana Cowin today announced the magazine's highest honor, the Food & Wine Best New Chef award, for 2008. This highly coveted award, launched in 1988, identifies up-and-coming chefs in America who are innovators with a distinct culinary style and vision creating exceptionally delicious food. The 2008 winners will be featured on the cover in the July issue and profiled as part of a 20th-anniversary package on foodandwine.com.

"Food & Wine has been scouting extraordinary chefs for the past two decades, and I expect this year's winners to make us as proud as any of the chefs who have preceded them," says Cowin. "These great cooks come from all around America, from California to Missouri to Vermont, and I'm excited to introduce them to a national audience. They are incredible talents."

See photos from our awards party in New York City.

Jim Burke, 34, is the owner and chef of James, a seasonally-focused, modern Italian restaurant in the Bella Vista neighborhood. Before opening James with his wife, Kristina, in 2006, Burke worked with top Philadelphia chefs Marc Vetri of Vetri (a Best New Chef 1999) and Vince Alberici of The Marker. He later headed the kitchen at Stephen Starr's Angelina. He also did a stint at the Michelin-starred Ristorante Frosio in Almè, Italy.

The chef and owner of Niche and the adjoining Veruca Bakeshop & Café, Gerard Craft, 28, began his career washing dishes in a pool hall in Salt Lake City. His love of cooking led him to take a job at Bistro Toujours, one of the city's top restaurants, under Bryan Moscatello (a Best New Chef 2003). Craft held positions at Chateau Marmont in Los Angeles under Mohammad Islam and the Metropolitan in Salt Lake City under Perry Hendrix. He moved to St. Louis in 2005 to open Niche, which is in a converted warehouse in the Benton Park area. Menu standouts are a "Bacon and Eggs" sandwich of braised pork belly, buttery brioche and an oozing poached egg.

Tim Cushman, 55, a Boston native, is chef and co-owner of O Ya, a contemporary New England restaurant with Japanese influences. With over 25 years of experience in the restaurant industry, Cushman has apprenticed at hotels and restaurants around the world, including the Mandarin Oriental Hong Kong and Hostellerie de la Poste in France. He also worked with top Japanese chefs including Nobu Matsuhisa and Hiro Urasawa, and served as corporate chef at Lettuce Entertain You Enterprises under founder Rich Melman. Cushman owns a restaurant consulting business called Ideas in Taste.

Jeremy Fox, 31, is the first Food & Wine Best New Chef to head a vegetarian restaurant, Ubuntu. Fox, who studied at Johnson & Wales University, started his career at Anson in Charleston; then he traveled the world working in high-profile restaurants such as Michelin two-star De Snippe in Belgium; Gordon Ramsay in London; Rubicon and Charles Nob Hill in San Francisco; and Manresa in Los Gatos, California. A carnivore himself, Fox and his wife, pastry chef Deanie Hickox Fox, create Ubuntu's vegetarian menu with produce from the restaurant's own gardens.

Influenced by the cuisine of Europe's wine regions, South African-born chef Koren Grieveson, 36, helped launch the wine bar Avec in October 2003 with her mentor, chef Paul Kahan (a Best New Chef 1999). Grieveson, who lived in Angola, Iran, England and Brazil as a child, was a caterer for the entertainment industry and a solider in the United States Army for nine years before attending the Culinary Institute of America. Prior to opening Avec she worked with Kahan for five years as sous chef at his restaurant Blackbird and also worked at San Francisco's Aqua under chef Michael Mina.

Growing up on Long Island as a first-generation American child in a Greek family, Michael Psilakis, 38, learned about the flavors and techniques of traditional Greek cooking from his mother. Today he has three Manhattan restaurants: Anthos, Kefi and (his newest) Mia Dona. Psilakis earned a degree in accounting and finance before a job as a waiter at T.G.I. Friday's led him to reconsider his career path. Psilakis worked his way up from waiter to owner of the trattoria Ecco on Long Island. He then opened his own Greek restaurant, Onera, in New York (later reinventing it as Kefi) and partnered with long-time friend and restaurateur, Donatella Arpaia, for Anthos and Mia Dona.

Simple flavors and fresh ingredients are the mantra of Ethan Stowell, the chef and co-owner of Union. In addition to Union, a five-year-old American bistro with a menu that changes daily, the self-trained, 33-year-old chef also co-owns two other Seattle restaurants, the year-old Tavolàta and How To Cook A Wolf, which opened in November 2007. He has worked with several Seattle chefs, including Tim Kelley of The Painted Table. Stowell owns over 600 cookbooks and claims to have read them all.

As a boy, Giuseppe Tentori helped out on his grandmother's farm in a small town outside of Milan. At the age of 19, while at Antica Osteria la Rampina in Milan, he was invited by chef Gabriel Viti (a Best New Chef 1991) to work at Carlos' in Highland Park, Illinois. He went on to become sous chef at the Metropolitan in Salt Lake City and chef de cuisine at Chicago's Charlie Trotter's before becoming executive chef at Boka in March 2007. Tentori, 35, has created an innovative menu revolving around seasonal ingredients. Tentori's eclectic, multi-layered dishes include smoked trout and squid stuffed with baby spinach, spicy pineapple and black tapioca.

Eric Warnstedt, 32, is executive chef and co-owner of Hen of the Wood at the Grist Mill, a historic site specializing in seasonal Vermont cooking using the best local ingredients (such as the namesake hen of the wood mushroom). A native of Fort Lauderdale, Florida, Warnstedt worked in the kitchens at Wildwood Restaurant in Portland, Oregon; Mark's in Fort Lauderdale; and Shelburne Farms in Shelburne, Vermont. He opened Hen of the Wood with co-owner Craig Tresser in October 2005.

A graduate of The Culinary Institute of America, Sue Zemanick has a passion for seafood that's reflected in her menu at the French/Creole Gautreau's. Zemanick apprenticed under chef Rick Moonen at Oceana in New York before moving to New Orleans and taking a job at Commander's Palace. She eventually found her way to Gautreau's, where she worked under chef Mat Wolf (a Best New Chef 2004). She became executive chef in 2005.

The winners will be fêted tonight at a party in New York City. Twenty former F&W Best New Chefs, including Daniel Boulud, Tom Colicchio, Wylie Dufresne, Dan Barber and Todd English, will be creating signature dishes and Level™ Vodka cocktails in honor of the milestone anniversary.

In addition to the 20 former F&W Best New Chefs, Hung Huynh, winner of the third season of "Top Chef" on Bravo, will also be preparing tastings for the celebration. Sponsors of the evening are Beringer, Chrysler, FIJI, and Level. Special thanks to Kerrygold and Riedel.

The 2008 F&W Best New Chefs will prepare an exclusive tasting dinner at the 26th annual Food & Wine Classic in Aspen, June 13 to 15.

The F&W Best New Chefs are chosen as part of a six-month selection process. The magazine works with trusted restaurant critics and food writers around the country to identify outstanding chefs who have been in charge of a kitchen for less than five years. Then the editors travel, incognito, to taste the food themselves.

As America's talent-seeking epicurean magazine, Food & Wine has awarded the Best New Chef title to such luminaries-in-the making as Thomas Keller (1988), Nobu Matsuhisa (1989) and Rick Bayless (1988). For a complete guide to the 20 years of F&W Best New Chefs, visit foodandwine.com/bestnewchefs.

Food & Wine is the modern, stylish, trend-spotting, talent-seeking epicurean magazine. Published by American Express Publishing, the leader in luxury lifestyle magazines, Food & Wine has a circulation of approximately 900,000 and is online at foodandwine.com. 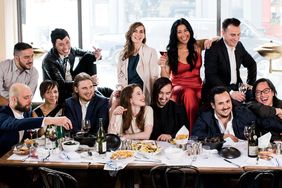 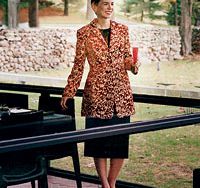