The soda brand is putting a drinkable twist on the controversial holiday dessert.

Over the years, fruitcake has become as much of a Christmas joke as a Christmas tradition. (Don't blame me, I like fruitcake!) Mtn Dew has never shied away from a good joke. Someone just got married to one of the brand's hard seltzers. And the soda brand is always down to release new flavors. In 2022 alone, we’ve seen Legend, Purple Thunder, the return of Typhoon after 11 years, six new flavors at the Mtn Dew Outpost, all sorts of iterations of Baja Blast, Overdrive, and Code Red Energy.

So now, Mtn Dew is hoping to use their soda star power to reclaim one of Xmas's most maligned treats: Rolling out nationwide this month for a limited time is Mtn Dew Fruit Quake — a new Mtn Dew flavor with a sweet kick of fruitcake.

"Mtn Dew is back with a holiday hot take,” the brand said in an email, "we’re making fruitcake cool again." Fruit Quake is billed as a "bold" spin on the "dated" holiday classic and the red drink being sold in appropriately festive bottles and cans.

Jamaican Black Cake Is the Fruit Cake of Your Dreams

Still, even Mtn Dew decided it's not a great idea to go full fruitcake. Instead, the brand describes Fruit Quake as offering a flavor that "merges the iconic citrus flavor of Mtn Dew with a blast of the fruity taste of the holidays." Fruitcakes often eschew citrus in favor of heavier fruits: for instance, our Christmas fruitcake recipe from Andrew Zimmerman features cherries, raisins, cranberries, and apple… not a lemon, lime, or orange in sight. So don’t expect Mtn Dew Fruit Quake to drink like liquid fruitcake.

However, perfectly replicating a traditional fruitcake is not the brand’s stated goal. "Fruitcake has long been known as the holiday dessert no one actually wants to touch, let alone eat. Mtn Dew is changing that," they write. "We're making everyone's holiday dreams come true by swapping the dated dessert with a tastier treat." So to summarize, Fruit Quake is supposedly even better than a fruitcake which, based on fruitcake's reputation, .

And at the very least, it's got caffeine — which is something normal fruitcakes can't offer. Chug a few bottles of Fruit Quake and maybe this will finally be the year you stay up all night and prove whether or not Santa is real. 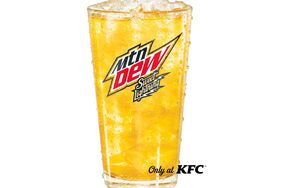