When you place an order at the McDonald’s drive-thru, you don’t typically get many surprises with your McMeal. Sure, you could get a few more ketchup packets than you expected, or a seventh McNugget might’ve found its way into your six-piece, but that’s about the best you can hope for. But when Josiah Vargas went to a northern Indiana McDonald’s, his Sausage McMuffin was served with something seriously unexpected: about $5,000 in cash.

In a now-viral TikTok video, Vargas sat in the front seat of his car, showing a heavy-looking plastic bag that he says he was handed over with his to-go order. “What’s in this bag?” he asked, lifting it out of his passenger seat. “Their [expletive] deposit.”

In the TikTok, which has been viewed over 2.5 million times, Vargas says that he needs to return the money “because I’m a good person” — although he briefly acknowledges “how much I want this money.” (Vargas is clearly a good human, but, come on, he’s still human.) He films himself walking back into McDonald’s and returns the bag of cash to the staff. The workers, who are never seen on camera, are heard thanking him profusely.

Near the end of the clip, Vargas says that he was given $200 and could return to the restaurant for free McDonald’s meals for the next month. “Do good, people,” he says, flashing a thumbs up.

“Josiah’s actions are an inspiration to us all, and we are eternally grateful for him returning our bank deposit," Estephan Awad, the owner of that Elkhart, Indiana McDonald’s, told the Indianapolis Star.

Vargas has filmed several follow-up TikTok videos since his viral moment, joking that he “blew up too fast” before he learned how to use the app. In one, he said that he’d gone back to the McDonald’s three days in a row; the first two times, they didn’t recognize him,  but on his third visit, they refunded him for his meals and gave him his next order for free.

He also admitted that he’d originally planned to return the money without filming it, but his sister encouraged him to turn the whole situation into a TikTok. “Like, she knew [that it would go viral],” he said. “She was exactly right.”

Vargas seems to still be settling into his newfound online fame — and yes, he’s still going to McDonald’s. “I got a McChicken, fries, and a Sprite,” he said. “And I ate it off-camera. I’m sorry.” 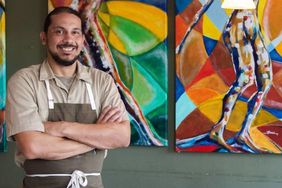