The mold on blue cheese is from the same family of spores used to make Penicillin.

With most foods, spotting gray veins with specks of blue mold accompanied by a quick whiff of ammonia means it's time to throw whatever it once was in the trash. But for blue cheese, encountering these signs means it's time to get out the crackers and start snacking.

Yes, blue cheese is made with mold. Some people find this troubling (some even go so far as to describe it as tasting like feet) despite the fact that this particular mold is not only safe for human consumption, but could even be healthy. From Roquefort to Cambozola, here's the history and science behind delicious moldy cheese.

Where did blue cheese originate?

The prevailing legend of blue cheese's discovery revolves around a happy accident. The story goes that, over a millennium ago, in the Rouergue region of southern France, a shepherd settled down in a cave for a tasty picnic lunch of rye bread and sheep's milk cheese while tending to his flock. However, prior to him taking a bite, the sheep got spooked and took off. He went after them, leaving his lunch behind. Months later, he passed by the cave and found his former lunch undisturbed ... other than by a thick layer of mold that had formed on top. Either because he was adventurous or simply very hungry, the shepherd took a bite.

So, why didn't the shepherd get sick when he ate his months-old moldy bread and cheese? Because the damp limestone caves that dot southern France are filled with naturally occurring Penicillium roqueforti mold spores — a variety of mold that is in the same family as the one that the antibiotic Penicillin is made from. Unlike other molds, Penicillium roqueforti (and, just as commonly used, Penicillium glaucum) do not produce toxins by themselves and are not dangerous to humans.

When these safe Penicillin varieties come in contact with cheese (either naturally or in a controlled facility), they greatly accelerate processes that create the unique look, texture, and taste we've come to associate with blue cheese. Penicillium roqueforti produces enzymes that release amino acids, which quickly break down the cheese's proteins (casein). Called proteolysis, this makes the cheese creamy, particularly near where the amino acids are most active — the gray, blue veins. In addition, Penicillium roqueforti also triggers another biochemical event called lipolysis, which catalyzes enzymes that lead to the creation of free fatty acids and the release of methyl ketone. This gives the cheese its distinct blue look, odd smell, and sharp flavor.

How is blue cheese made?

The entire world's yearly supply of Roquefort cheese — about 18,000 tons worth — comes from the small southern French village of the same name. And it's still made in a similar fashion as that forgetful shepherd, although cheesemakers have found ways to speed the process. They start by leaving rye bread in their famed caves for weeks at a time to encourage mold growth, because grains attract mold more quickly than dairy products. Next, the moldy bread is dried out and ground up. Then, they take the mold dust and sprinkle it on fresh sheep's milk cheese curds. After shaping the cheese into wheels and dusting it with salt (to better preserve it), they drill holes into it for aeration. Finally, the cheese goes back in the cool, dark, damp caves where a constant temperature and humidity encourages the growth of mold.

These days, most store-bought blue cheeses are made in labs and hygienic production facilities, rather than caves, where they simulate the dark, damp conditions. This is done to make sure other — actually dangerous — molds, fungi, and bacteria don't find their way onto our cheese.

Of course, Roquefort is not the only blue cheese. There's Stilton from England's central counties, Italy's Gorgonzola, Spanish Cabrales, and Maytag Blue, which ripens in the hillside caves of Iowa, among countless other cheeses. While each cheese has its own unique flavor, they all gain their sharpness and distinctive blue-gray color from Penicillium mold spores. 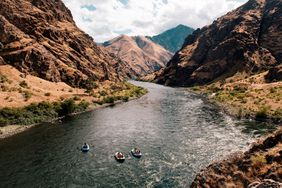