Trini Christmas Is the Best

Food and music are intertwined in the twin island’s holiday traditions.

As Chicago slides deeper into winter and the skies turn a dispiriting gray, my homesickness rises to a crescendo. I was born and raised in the Caribbean and miss the warmth and vitality of my homeland—Trinidad and Tobago—at any time of year. But being away for Christmas gives me a particular pang.

This year, the pandemic prevents me from going home to my elderly parents. Besides missing my family more than I can express, I just miss being home for the holidays. Why? Because Trini Christmas is the best. That's more than just a song title. It's the facts.

Our Caribbean heat and lush greenery make the holidays feel miles away from "White Christmas," "Let It Snow," or any of those traditional tunes. Our Christmas celebration is a true precursor to Carnival season. The twin islands come alive with a festive vibe that's hard to explain if you've never experienced it, with music, traditions, and foods you can't find anywhere else.

In an effort to stave off seasonal depression and bring a bit of my homeland to Chicago, I have been indulging in anything that brings me closer to home. Still, there are traditions that feel out of place in a Midwestern landscape. For example, parang. Trinidad's popular folk music was traditionally performed by a roving band of performers like Christmas carolers, who insisted on being served food by each household they visited.

Thanks to our parang tradition, Trinidadian Christmas music is often intertwined with the demand and expectation of specific foods. I made a YouTube playlist to keep the vibes going while I'm in the kitchen. One of our foundational holiday songs, 1954's "Drink a Rum" by Lord Kitchener, exhorts us to "drink a rum and a ponche a crèma, drink a rum. It's Christmas morning."

1977's "Something Salt" by the Mighty Chalkdust tells the story of a rogue group of serenaders who insist on being served savory foods in addition to the typical offerings of cake and sweet bread.

Susan Macio's "Trini Christmas Is the Best" lists the staples: ham, pastelles, ginger beer, ponche a crème, sorrel, and local homemade wine are all expected at most Trini households for the holiday season.

Scrunter is one of our most popular Christmas songwriters, and so many of his hits are about food and drink. "Homemade Wine" enumerates the varieties found in the islands, offered by Gloria, a purveyor who makes "citrus, hibiscus, dandyroot, passion fruit, ti marie, strawberry, aloes, and cane" wine, among others. In my favorite song, "Madame Jeffrey" is told it's "time to put some smoke in your kitchen. Get up, it's Christmas morning. I hope you know is White Oak we drinking." His biggest hit, "Piece ah Pork," reveals that is all he wants for Christmas, and nothing else will do.

You could be excused for thinking that Christmas in Trinidad and Tobago is an extended gluttonous bender, and it certainly could be, if you so desired. The season is joyful, but largely family-focused and religious in overtone. Some of the most popular foods this season, oddly enough, are imported, specifically Royal Dansk butter cookies in the iconic blue tin, and Peardrax and Cydrax, long discontinued soft drinks from the UK that remain in production exclusively for the Caribbean marketplace. Fruit stands selling apples and grapes pop up around the downtown area, a remembrance of times when those were considered exotic, specially imported holiday fruits in the Caribbean.

For the Christmas season, we drink homemade beverages like sorrel, ponche a crème, wine, and my mom's favorite, ginger beer. Before arthritis gnarled her fingers, she would grate her ginger by hand and make me taste the drink to see if it was sweet enough.

There were certain staples she insisted on making herself, and others she outsourced. My dad usually managed the ham, waking up early to drizzle sweet, mustardy glaze over it as it baked. Pastelles are yellow cornmeal parcels filled with meat, traditionally wrapped in a banana leaf, similar to Mexican tamales or Venezuelan hallacas. Making pastelles is labor intensive, and the press was hard on my mother's hands, so we ordered those from a family friend.

Before Christmas Eve, my mother would make a traditional Trini black cake, using the prunes, currants, and raisins she kept soaking in a jar of rum all year long. I was always given jobs that were safe for a little kid, like cutting the wax paper circle to go at the bottom of the cake pan. I'd help shell fresh green pigeon peas into an enormous yellow plastic bowl for the traditional stewed pigeon peas we serve at Christmas lunch. Sometimes little worms emerged, coiled inside the pea pods.

My sister, Petal, would use a sharp knife to clean the fresh sorrel before boiling the red sepals into our traditional sweet brew. Petal prides herself on her ponche a crème, our answer to eggnog—her recipe is sweet and delightfully potent. Back in the day, my mom would spend an afternoon making coconut sweet bread and a nice salty loaf of white bread to accompany the ham, with a fresh jar of spicy pickled chow-chow on the dining room table to make the sandwich complete.

When I was growing up, my family had a somewhat unusual tradition. We would all go to midnight mass as a family, and when we came home, we would gather around the Christmas tree and my parents would usually pop a bottle of bubbly or sip a glass of something strong. We would each open just one special present before going to bed around 2 a.m.

The next morning, we would wake up to a Christmas breakfast of ham, pastelles, and a slice of sweetbread. Then we would then open the rest of our gifts as a family. After gifts came the work of preparing the Christmas Day repast—macaroni pie, those stewed pigeon peas, roast beef or stewed pork. Aunty Opal would bring a potato dish and her Waldorf salad. Turkey isn't beloved by my family, but it has become more popular in Trinidad through the years. For dessert, Trinis are unlikely to make a pie. In addition to the ubiquitous black cake or sponge cake, there might be a cassava pone. Some homemade coconut or soursop ice cream might round out the meal.

The last time I was home for Christmas was in 2017. According to the promise to alternate Christmases that I made to my family when I married my husband, 2020 should have been a year to return home for Trini Christmas.

I hope next year I'm able to spend it with family, safe in the knowledge that my presence won't threaten illness. I'm willing to wait as long as I have to. This year, I'm going to skip the ham and make recipes that make sense for our small home and fridge. Instead of boiling a whole stockpot of sorrel and decanting into bottles, I'm using dried sorrel and making a smaller amount at a time. I'm going to try my hand at pastelle pie, something I can easily cut up and freeze. I'm using frozen pigeon peas for my traditional recipe, so those little worms will just be a memory.

The pandemic continues, so my family at home won't be doing the usual midnight mass, and I know my mom is sad about it. I still hope there's one part of it we can all keep. At midnight on the eve, I'd love to open one gift and toast with a bottle of bubbly, just for the blessing of celebrating this very different Christmas at all. 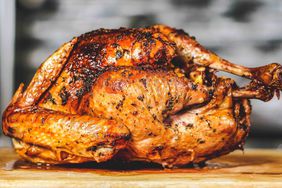 How I'm Making Thanksgiving Feel Like Home This Year 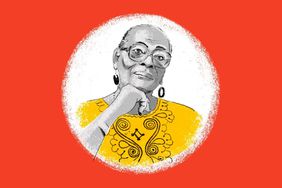 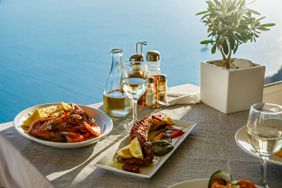