Sherri McGee McCovey is a journalist, best-selling author, and television producer with more than 20 years of experience spotlighting chefs and restaurants, focusing particularly on establishments owned and operated by women and people of color.

As an American Airlines flight attendant, Deborah VanTrece traveled the world. She visited and lived in countries like Switzerland, Spain, France, Italy, Argentina, and Israel with her husband, who was a professional basketball player. She would often talk about food on flights with co-workers from Brazil and Peru. It was a charmed life until an airline strike briefly stalled her career. "I decided then that I never wanted to be in a position where a union and a company controlled when I made a dollar," says the Kansas City native.

By 1998, she had graduated from culinary school and opened her first restaurant, Edible Art and Gourmet Catering, in Atlanta. She was hired as a chef for the Atlanta Olympics and catered events for foreign dignitaries while balancing the restaurant, flying for American, and raising her daughter as a single mom following a divorce. It all eventually became overwhelming, so she closed the restaurant, but continued to cater and fly for more than a decade.

In 2014, she opened Sweet Twisted Soul Cookhouse and Pours, which moved to a 2600 square-foot, 100-seat indoor/outdoor space in Northwest Atlanta two years later. She runs the restaurant with her daughter, Kursten, who manages front-of-house, and wife, Lorraine Lane, who handles the finance and administrative side. Sweet Twisted Soul celebrates Chef VanTrece's passion for comfort food with globally infused flavors. "Soul food has always gotten a bad rap. Our ancestors grew the food they ate and made the most of what they had," she says. "I wanted a restaurant that celebrates that. It is important for people to know what is on their plate. We educate people. We are deliberate about every product. We trim fat. Pick organic collard greens. If done right, our food can be healthy."

Business was booming until the pandemic forced Sweet Twisted Soul to close. "All I could think about was walking in the shoes of others," she recalls. Chef VanTrece took what food she had left and made it stretch to feed her staff, the staff of other restaurants, and seniors in the community. To stay afloat, she offered customers pay-what-you-can dinners and Fish Fry Fridays.

Last May, she dusted off an old idea she had for a simple chicken concept and launched A Different Kind of Chick, a weekend slow fast-food pop-up that is run from the Twisted Soul kitchen. The menu includes entrees and sandwiches available for takeout and delivery with playful names like Kansas City Chick (smoked half chicken) Skinny Chick (herb and garlic marinated grilled chicken breasts), Morning After Chick (fried chicken with vanilla waffles and maple bourbon syrup), and Side Chicks (a trio of sautéed farm vegetables, three-cheese macaroni, and garlic mashed potatoes). She is now contemplating a way to move A Different Kind of Chick into its own space.

On March 16 she celebrates the release of her debut cookbook, The Twisted Soul Cookbook: Modern Soul Food With Global Flavors (Rizzoli), with a special virtual book launch party, discussion, and cooking demonstration. "It is a labor of love that I am happy to finally bring to the world," she says. 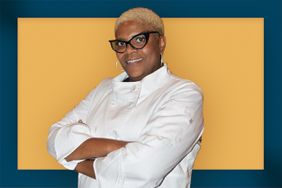 How Chef Deborah VanTrece Became the Mentor She Always Wanted