The Return of the Automat

Devorah Lev-Tov is a traveler at heart who traverses the world seeking food, adventure, wellness, and culture — with a side of luxury. She lives in Brooklyn with her husband, two sons, and dog, all of whom she often brings with her on her journeys.

Devorah has over six years of experience as a nonfiction book editor and has co-authored three books.

She considers herself a pizza connoisseur and is known to plan her day around which restaurants she wants to check out. She has previously lived in Maryland, Massachusetts, Israel, Australia, and India.

You're feeling hungry. You pull out your phone, place an order, and pay for it, and you wait for a text telling you it's ready. You use your phone to unlock a small cubby on a wall of electronic boxes, take your items, and go. Maybe you interact with a greeter at the door, maybe not. Maybe there are other customers inside the restaurant, maybe not. It's perfectly plausible that you get your food without interacting with another human at all. This is the promise of the modern automat, and it's gaining speed in the U.S., in part due to the pandemic.

"Diners don't have to awkwardly shout through their masks to order food, and they can maintain social distancing," says Stephanie Nikolopoulos, who wrote an article in April 2020 predicting the automat would return. "Perhaps even more significantly, though, because they're not interacting with a masked waiter or even seeing people interacting with their food at all, it provides them with a sense of security. The shiny metal self-serve boxes the food sits in and their glass windows suggest a hygienic aesthetic."

And yet, two new businesses started hatching their plans to open no-contact automat restaurants well before the pandemic began.

Stratis Morfogen is opening Brooklyn Dumpling Shop, a zero-contact restaurant utilizing automat technology, in May. He predicts that "automats are going to make fast food a lot more efficient, a lot more cost-effective, and it's going to change the odds of seven out of 10 restaurants failing in three years. I think that number is gonna flip."

At Brooklyn Dumpling Shop, customers use their phone or computer to order and unlock the locker assigned to them via the app. The high-tech lockers are temperature controlled for heating and cooling and include UV lights, which Morfogen added after the pandemic struck for extra sanitization.

Joe Scutellaro, who opened Automat Kitchen in Jersey City in January, also believes that touch-free technology positions restaurants for success. "When you look at restaurant accounting, there are three big costs: the rent, the food, and the employees," he says. "So if we can cut down the front-of-house costs, that's going to make it much easier to be successful and profitable in the restaurant business."

Of course, the automat is not new. In fact, it's quite old. The automat concept was invented in Berlin in 1895 and made its way to North America, thanks to Joseph Horn and Frank Hardart, who opened their first eponymously named automat in Philadelphia in 1902.

The trend took off when the first New York location of Horn & Hardart opened in 1912, eventually expanding to about 40 locations in NYC alone. Two of its many appeals at the time were that people thought of it as sanitary, and it also democratized the dining out experience, opening it up to a wider customer base. The original chrome and glass lockers functioned like vending machines: customer would put nickels directly into the cubbies displaying dishes like meatloaf, sandwiches, and pie slices, pull a knob to open the door, and release their food.

Scutellaro, who grew up in Hoboken, recalls going to the automat as a kid. "My grandmother used to take us into the city, mostly around the holidays, in the late '60s, early '70s, and we'd always go to the automat, so I always had a fond memory and affinity for the automats," he says. Fittingly, Automat Kitchen's menu recalls Horn & Hardart's comfort food, with items like macaroni and cheese and chicken pot pie.

Somewhat surprisingly, Horn & Hardart automats didn't save on labor costs—someone had to prepare all the freshly made food—and, in fact, the company was derided for mistreating its behind-the-scenes workforce. In the 1970s, more fast-food concepts opened up, like McDonald's and KFC, and the once-futuristic seeming technology became outdated as inflation caused prices to rise, necessitating the need for dollar bills instead of coins as payment, which the machines couldn't accept. The last Horn & Hardart, on Third Avenue and 42nd Street in Manhattan, closed in 1991.

Morfogen appreciates the nostalgia of automats, but hopes to do things a bit differently at Brooklyn Dumpling Shop.

"I realized it's such a cost effective, efficient way to order," he says. "And with technology today, I think it's important to bring the automat back now." Morfogen, who is working with FranSmart to franchise Brooklyn Dumpling Shop, says there are about 25 locations signed on, mostly in the tri-state area, with about 100 more in the works. If things go according to plan, Brooklyn Dumpling Shop's automat technology will be everywhere from Texas to Switzerland. One place it's already popular is the Netherlands, where the automat chain FEBO has multiple locations.

A close cousin of the automat is the vending machine, which in many countries, particularly Japan, offers everything from sandwiches to ramen. Stateside, vending machines have been evolving beyond candy bars over the last few years, with business like Farmer's Fridge, which vends salads and grain bowls; Applestone Meat Co., which sells raw meat and poultry from refrigerated vending machines in New York's Hudson Valley; and Yo-Kai Express, a ramen vending machine started by Andy Lin in 2016 that has machines across northern California and beyond, including at Ontario International Airport, a few hotels, and Squaw Valley Ski Resort.

When the lockdown began, and Cheryl Wakerhauser had to lay off staff at her bakery Pix Patisserie in Portland, Oregon, she struggled finding a way to stay open. She realized a no-contact vending machine might be the ideal solution during the pandemic.

"When the COVID-19 pandemic started, the idea came back and just made more sense than ever: contactless and open 24 hours when restaurants were not allowed to open their doors," says Wakerhauser. And it also gave her the opportunity to hire back her kitchen staff to restock the machine with tasty treats. Soon, the machine—a refurbished Shoppertron 431 from 1998—was bringing in more than $4,000 a day, so she purchased a second one.

Wakerhauser has encouraged other restaurateurs to try out the machines, convincing both East Side Deli in Portland and Silver Salmon Grille in Astoria, Oregon, to purchase refrigerated vending machines during the pandemic.

Waherhauser anticipates keeping the machines post-pandemic. "When we are 100 percent back up and running I believe the vending machines will complement the restaurant, with after-hour sales and freeing up servers' time having to do takeout orders," she says, pointing out that now the bakery is open 24 hours a day.

The automat, it should be noted, never truly went away. Bamn! briefly existed on St. Marks's Place in the early 2000s, even employing the classic change-accepting vending machines, banking on retro nostalgia that apparently wasn't enough for significant sales. On the opposite end of the spectrum, a tech company called Eatsa launched in San Francisco in 2015 with several automat-style eateries utilizing tablets for ordering, with a menu mostly focused on quinoa bowls—which may have been its downfall. Morfogen and Scutellaro agree that if the food's not good, customers won't return after they experience the novelty once.

The last Eatsa closed in 2019, but in 2017 the company licensed its technology to places like Starbucks and Wow Bao, a Chicago-based mini-chain. Starbucks never seems to have actually utilized it, but Wow Bao installed the automat technology in two of its locations. Last summer, Eatsa (which has now changed its name to Brightloom after resturcturing) told Wow Bao that they were ending technological support.

Wow Bao removed the automat technology from those locations in July 2020. Aside from the lack of technological support though, Geoff Alexander, CEO of Wow Bao, cites additional reasons for the decision.

"We are in the hospitality business," says Alexander. "When you are a restaurant, you are food first and hospitality second. Any restaurant you go to regularly, you have some kind of interaction, even fast food. During these dark days of COVID, I think what people want is community more than anything else."

Whether Brooklyn Dumpling Shop and Automat Kitchen are successful remains to be seen, but Nikolopoulos thinks the concept will always return:."I think the automat will continue to go in and out of fashion," he says. "Every generation puts its own spin on it." 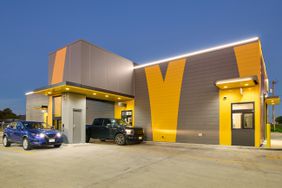