The Religious History of Pretzels

Most people don't know that pretzels began as a monk's joke.

We may not often think much about pretzels — absentmindedly tossing them in our carts as we wander down the snack aisle — but Americans eat a whole heck of a lot of them. According to 2021 data, more than $1.4 billion worth of pretzels are sold a year in the U.. The sometimes-soft, sometimes-hard snack is a favorite to munch on while watching sports (or simply drinking beer during Oktoberfest).

The history of pretzels is a bit unexpected: They have deep-rooted religious origins. At one time, they were thought to provide good fortune to those who crunched away.

The pretzel's legendary origins date back over 1,400 years. While The New York Times reported in 1988 that a fifth-century illuminated manuscript in the Vatican featured what may be the first likeness of a pretzel, most sources date the snack's invention a century later. It was around 610 CE when legend has it that a monk with a twisted sense of humor lived in a secluded monastery in Northern Italy or Southern France. As a reward to his students for learning their prayers, this monk handed out baked pieces of leftover bread twisted together to resemble crossed arms, which was a traditional prayer pose. He called them pretiola, which is Latin for "little rewards." What's more, the three-holed "pretiola," claimed the monk, represented the religious trinity of the Father, Son and Holy Spirit.

The etymology of the word may not prove this story to be entirely true, but certainly shows that the pretzel crumbs lead back to the Catholic Church. Some scholars believe that the word "pretzel" is not a corruption of pretiola but rather comes from the Old German word brezitella, which is derived from the Latin word for arm: bracchiatus.

During the Middle Ages, monks gave away pretzels to the poor as a religious symbol that additionally provided literal sustenance. Because of this, the twisted snack caught on as a sign of fulfillment, good fortune and prosperity. Pretzels are also strongly associated with Lent, as they do not contain eggs or dairy and are thus ideal for fasting. It started popping up in medieval art as a lucky symbol, most famously in Herrad of Landsberg's encyclopedia Hortus Deliciarum. A 12th-century German nun, Herrad depicted pretzels as an important part of any feast.

In the 16th century, it was heroic pretzel bakers who saved Vienna from the threat of ransacking by Ottoman Turks. The story goes that in 1529 soldiers from the Ottoman Empire began the Siege of Vienna by tunneling underneath the Austrian city under the cover of darkness. However, several monks in the monastery's basement, hard at work making the next day's pretzels, overheard the commotion. They quickly alerted the city leadership and military. By doing this, the monks were able to thwart the attack and save lives. In thanks, the Austrian emperor gave the pretzel bakers their own coat of arms which included angry lions holding a pretzel. It's still used at European pretzel shops today.

So the next time you crunch away on a pretzel, just remember they've had a long journey through history, from monastic joke to the baked good that may have saved a city.

How to Make the Saltiest, Chewiest, Tastiest Soft Pretzels
Was this page helpful?
Thanks for your feedback!
Tell us why!
Related Articles 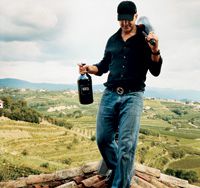 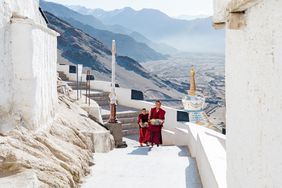 Life-Changing Kitchen Wisdom from Monasteries Around the World