Our best advice for cleaning, seasoning, buying, and cooking with cast-iron year-round in your kitchen and on the grill.

Few cooking tools are as iconic or ubiquitous as cast-iron skillets, but the weird mythology around them dissuades plenty of people from actually using them. Debates swirl around how to clean and season cast iron to the point where folks fear that if they use a single drop of soap or a speck of rust forms, the cast-iron police will show up in their kitchen and sentence them to a life of Teflon. But that's all malarkey. It's practically impossible to permanently mess up cast-iron cookware, and the best way to make it last a lifetime and beyond (seriously, this stuff is meant to outlast us) is to cook with it as often as possible. Here's how.

A well-seasoned cast iron skillet takes time, patience and care. However, this does not mean that you need to coddle it like a newborn or tuck it into bed every night. Cast iron is a tough, versatile material that is exceptional at conducting hot, even heat, but it does require some maintenance. A new cast iron skillet is raw natural metal and, just like our skin, it has pores. When you heat this material, the pores open and absorb the oils and fats from what you're cooking. Over time, these oils combine with the porous surface and create an easy-release surface that is harder and smoother than cast iron is on its own. This process is called seasoning and it is much easier to do at home than it sounds. To help you get the most out of your pans (and keep them in good cooking shape), here are a few dos and don'ts to live by when it comes to cast iron. (Plus, the perfect skillet for every budget, style and occasion.)

How to Clean Your Cast-Iron Skillet Without Breaking It

Cast-iron skillets seem to confound people. It makes sense, in an era of nonstick cookware and stainless steel, that they could be intimidating. The rules are different. They have to be seasoned before you start cooking with them. And to maintain that all-natural nonstick coating, you have to be careful when cleaning them too. You don't soak them. You can't put them in the dishwasher. If you mention that you have one on Twitter, many white dudes will lecture you on their proper care and maintenance and make you wonder. But I'm here to soothe your nerves and let you know a simple truth: It is very, very hard to irreparably mess up a cast iron skillet. Read more.

A cast iron pan is one of the most important tools in any well-stocked kitchen. Besides being nearly indestructible, cast iron can be used in almost any setting imaginable, from the stovetop to in the oven to atop a campfire. However, if not cared for correctly, problems can arise with even the most well-seasoned examples. Here are five common problems with cast iron and how to fix them. Read more.

If a possibly 90-year-old cast-iron skillet could stand years, if not decades, of neglect in the muddy, wasp-infested, quite likely haunted shed behind my house and emerge as the workhorse of my kitchen, that should tell you about how much neglect a cast iron skillet can take and still be perfectly useful. People get so pedantic about cast iron, but they are truly forgiving pans. You are not going to bring about the apocalypse by dabbing a little soap on your cast-iron pan. Seriously, I checked. Not with a priest or anything but I can if you need me to. I called Mike Otterman, the CEO of Lodge—a company that has been making cast iron cooking gear since 1896 and sells 50 million pounds worth of cast iron products every year, include their 12-inch skillet that is the single best-selling item in the entire cookware industry—and he uses a little soap on his pans. Here's what he told me about caring for them. Read more.

Plus Otterman shared some pretty stunning facts and figures about the company that's been in business for 125 years. Read more.

The 8 Best-Rated Cast-Iron Skillets for Every Kitchen, According to Thousands of Reviews

A cast iron pan is an essential piece of equipment for any cook. It not only transitions from grill to stovetop to oven with ease, but it's versatile enough to sear steaks and seafood or bake fluffy frittatas and cakes. Plus, the skillets are practically indestructible (especially if you know how to clean and handle them). But not all cast iron is created equal — you'll want something that won't only last, but improve with time. So to help you find the best cast iron skillet for your needs, we turned to reviews from real customers who have purchased and tried these products for themselves. What we found were eight skillets so beloved, customers couldn't stop raving about them. Read more.

A Dutch oven is one of the most essential kitchen tools a home cook can have. Often made out of coated or uncoated cast iron, Dutch ovens look like heavy-duty pots. Along with sturdy handles and durable designs, they have thick walls with lids that help trap heat and steam, allowing them to cook food evenly. They can be used in the oven or on the stovetop to bake bread, braise meat, boil stew, bake the best Dutch oven cobbler, and so much more. The Dutch ovens recipe list goes on and on — the possibilities really are endless. Read more.

9 of the Wildest Misconceptions About Cast Iron, Debunked

Everyone seems to agree that cast iron cookware is wonderful, and everyone seems to believe they know best about how it should be used and cared for. To be blunt, many of these people are wrong. Here are 9 of the biggest misconceptions about cast iron, disproved. Read more.

I Have a Glass Cooktop. Can I Cook with Cast Iron?

If you've ever made the switch from a gas range to an electric range with glass cooktop (willingly or unwillingly), you've likely been told the tragic news that you can't cook with cast iron anymore. Thankfully, we're here to tell you (with the expert guidance of one big cast-iron brand) that you can indeed use your beloved Dutch ovens, skillets, and other cast-iron pans on your glass cooktop — with a few caveats. Read more.

How to Use Your Cast-Iron Skillet All Winter Long

Rustic, heavy, affordable and great at retaining heat, the cast-iron pan is one of the most useful pieces of equipment you can have in your kitchen — especially when it's cold out. Here are seven ways to get the most out of your favorite, perfectly seasoned pan this winter. Read more.

Why Your Cast-Iron Skillet Is a Must-Have Grilling Tool

Cast-iron skillets are great for all-year-long cooking on the stovetop, but their ability to take serious heat means they're also great on a grill. From smoky grilled beans to sweet graham cracker-studded cake, here are five reasons a cast-iron skillet will be your go-to for summer grilling. Read more.

Deep Clean Your Cast-Iron Skillet with This Miraculous Gadget

Sometimes we pour some kosher salt in our cast irons and scrub with a sponge to remove residual clingy food. But sometimes it takes a special brand of elbow grease to get the job done. That's where our favorite $24 gadget The Ringer comes in. Read more.

Cast-iron skillets are an incredibly versatile kitchen tool, able to fry eggs, sear steaks, and even bake brownies (yes, brownies!). And in this roundup, we've gathered some of our favorite ways to use them, from making a polenta Dutch baby for the ultimate brunch to whipping up a skillet fruit crisp that can be adapted for any season. These long-lasting pans can be used to make breakfast, dinner, and everything in between — read on for even more of our favorite cast-iron skillet recipes. Read more. 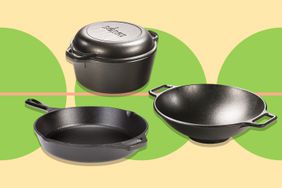 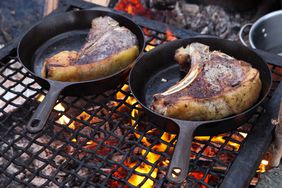 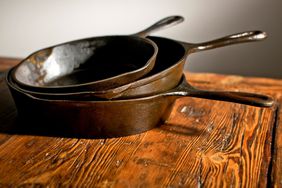 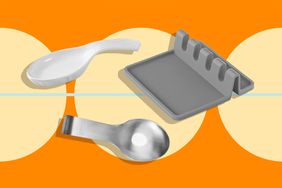 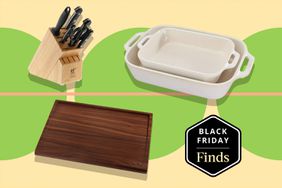 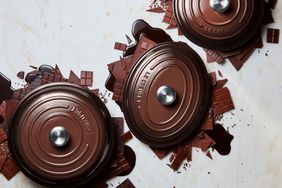 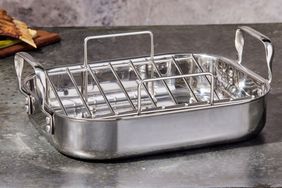 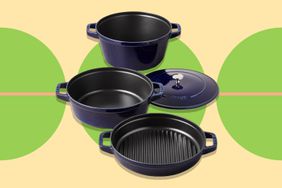 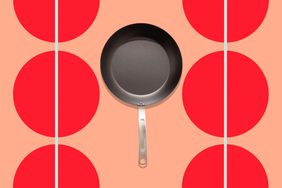