The culinary collective creating a future for cookware, packaged goods, and community engagement that’s more colorful and inclusive than ever before.

Jon Gray, Pierre Serrao, and Lester Walker are busier than a Blue Origin rocket launch pad. In the past year alone, the trio behind Ghetto Gastro, a culinary, art, and design collective from the Bronx, have launched a wireless headphone collaboration with Beats By Dre; appeared in a Slim Aarons-inspired ad for Jay-Z's new cannabis company, Monogram; and collaborated on a carbon steel cookware line with Williams Sonoma, as well as on a line of sleek small appliances, CRUXGG, at 1,792 Target locations. Next up, they're taking the Ghetto Gastro brand to Tokyo with Burnside, a chef-driven casual café and eatery by day and restaurant, bar, and lounge by night, designed by the Norwegian interior design firm Snøhetta.

The trio built their reputation on one-of-a-kind international events, always with the mission to empower underprivileged communities. Their blend of community activism, culinary chops, and mixed media experience has put them in the room with major companies looking to align with their values. One of these values is a give-back program built into every new product launch, which infuses funds back into the community. For the Target line, 5% of profits go directly to a collective of nonprofits that are working to end food insecurity, including artist Dan Colen's Sky High Farm and the New York–based organization Project Eats.

"As much as we are champions of these different institutions and organizations, the people on the ground are putting in that pain, delivering packages of food to people and doing that labor," Serrao says. "We wanted to make sure that they were recognized as well."

After selling out of waffle makers with their first small appliance line, Ghetto Gastro developed their own consumer packaged good with Wavy, a waffle mix made with cassava from South America, amaranth from Mexico, and sorghum, millet, and nuts from Africa. They're working on a syrup, too.

We consider ourselves to be the mouth of the global South.

"We've got to give you the trifecta to set you up for a successful, anti-racist breakfast," Gray says. "We consider ourselves the mouth of the global South. We're rejecting the idea that [cuisine] is all Eurocentric. How do you bring these other continents like Asia, the Americas, Africa and tell these culinary stories?"

Ghetto Gastro puts storytelling at the heart of everything it does — whether that's a product launch or a live event — but the team has bigger goals in mind. "We're focused on building an infrastructure so we can, basically, own our royalties," Gray says. "Create the value, but also capture it." 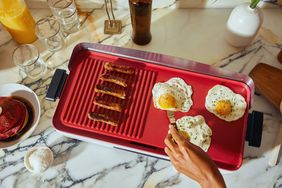