AubSauce Is the Condiment I'm Pouring On Everything This Summer

A strawberry, balsamic, & rosemary sauce that's similar to a barbecue sauce but so much more, AubSauce will change your summer grilling game.

In these gradually warming days of spring, of all the condiments at my disposal, I found that one in particular has a hold on me: AubSauce. Bright and tangy, thinner than barbecue sauce with a little bite, it's a beautiful shade of scarlet and is at once tart, earthy, and sweet. It takes whatever dish I've poured it on and shakes it awake. I'll put it on roasted Yukon gold potatoes, zhush up leftover grilled chicken, and have even used it in a barbecue sauce vinaigrette. And the man behind the sauce, Aubrey Lenyard, is almost as vibrant as the sauce itself.

AubSauce is an Atlanta-based company that Lenyard founded in 2019. The entrepreneur has always needed a creative outlet. When the Birmingham native graduated from high school, he pursued fashion ("I know I was probably the only boy in school that received Vogue and W Magazine," he laughs) and designed wedding gowns for about 15 years before going into the corporate world. There was also a brief tote bag endeavor between corporate stints.

By day, Lenyard works at an incubator at Georgia Tech that helps entrepreneurs launch businesses. Being around creative people pursuing their dreams inspired Lenyard to take a chance on something new. A conversation with his friend about peach-infused barbecue sauce led him to wonder if he could make his own, so he got to experimenting in the kitchen and brought samples into work for his coworkers to try. "You hear the story where people will say, 'Oh yeah, this is so good. You really should sell it.' But I was talking to a lot of CEOS and things like that and they would tell me 'Aubrey, you really have something on your hands here,'" explains Lenyard. He created a Kickstarter and raised $5,000 in 24 hours. When it closed it was at $10,000.

His first flavor was the Spicy Peach, an homage to his grandmother's cobbler. He worked to balance the sweet and savory sauce with a touch of cinnamon. "The first couple of batches that we made, the cinnamon had a sort of takeover spirit. Once the cinnamon was just right, it was perfection," says Lenyard. "If you're eating a pork loin or something like that, it's just going to give your pork loin on a nice sweet smoky-type taste."

In June of 2020, just after he made his first batch of the strawberry balsamic-flavored sauce, he hit his first major roadblock. Lenyard started feeling sick, but a negative Covid test left doctors puzzled. Eventually, he was rushed to the hospital where they worked on diagnosing him. He was there when he got his first newspaper mention and when Oprah Winfrey's office called asking him to submit sauce for the last issue of Oprah's Favorite Things. "I hate to be morbid, but I just didn't know that I was going to make it or not, and it was bad," he says.

In August he tested positive for Covid and after he recovered he had to focus on rebuilding his health, and his brand. He had to find new partners and new co-packers. Some of the stores who carried his products could no longer afford to shelve it. "They would worry now about just having the items their customers were looking for, for everyday." But he continued to sell his items online, found new partners, and is currently in talks with a large retailer who is interested in carrying his sauces.

Now, at long last, his strawberry balsamic and rosemary sauce is out in the world. It's more versatile than your average barbecue sauce , says Lenyard. It's a great marinade for chicken thighs, but a friend of his loves it over vanilla ice cream. While Lenyard hasn't tried that particular combination, he's not surprised that it works. "You sort of get that little acidity taste to the sweet. It's yummy together. So I imagine strawberry with balsamic on vanilla ice cream is as delicious," he says.

AubSauce might be a full-time endeavor one day, but for now he's content to keep it as his delicious side hustle. Just as strawberries symbolize joy and love for some, AubSauce is Lenyard's joy. "If I don't do something creative, I think I might not do so well, and being able to decide my label and flavors, that just means the world to me," he says. "It gives me control of something that I get to put out into the world that people will enjoy."

Updated by Lia Picard
Was this page helpful?
Thanks for your feedback!
Tell us why!
Related Articles 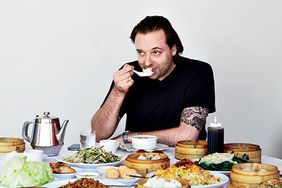