Experience the magic of Brezza chef Nicole Brisson in your own home.

Nicole Brisson, the chef and meat maven behind Brezza at the new Resorts World Las Vegas casino, has started shipping her dry-aged steaks nationwide. She believes this beef will be worth the wait.

"Every day, we taste the meat, and it's getting a little better by the day," said Brisson, a Dario Cecchini protégé who previously ran the kitchens at prominent Vegas destinations Carnevino, Eataly, and Locale.

Brisson has been talking to Vegas chef friends, including Sparrow + Wolf's Brian Howard and Graffiti Bao's Marc Marrone, about supplying them with steaks. She's even discussed the possibility with Daniel Ontiveros, the chef at the forthcoming Carversteak at Resorts World. In the meantime, guests at Brezza can enjoy Tuscan-style preparations of dry-aged steaks that are cooked on a grill with white oak and olive branches.

"When you age beef, you're controlling three components: airflow, temperature, and humidity," said Brisson, who keeps her 5,000-square-foot dry-aging space at 38 degrees and about 85 percent humidity. "It's really about the time. Initially, you create the bark that protects the meat through the aging process, and the enzymes continue to break down, making the meat more palatable, more digestible. But it also imparts kind of a funkiness, those Gorgonzola characteristics, those slightly truffle earthy characteristics."

Brisson is aging some steaks for 120 days, which also makes beef significantly more tender while intensifying flavors and creating odors that might remind you of blue cheese or foie gras. And these steaks look different than what you might be used to.

"It's more crimson color than it is a blood-red color because of the lack of moisture," Brisson said.

Brisson is, of course, familiar with Japanese wagyu as well as grass-fed beef that reminds her of eating in Europe. She even serves a Piedmontese grass-fed steak at Brezza. But for Bistecca di Brisson, she chose corn-fed Black Angus beef from the Kansas-based Creekstone Farms for several reasons.

"I've just always had a great symbiotic relationship with them," she said. "It's a struggle in our industry right now, and we really just want to push forward in the right direction and do it in a collaborative way where we're all supporting each other."

Brisson had visited Creekstone and met with their ranchers. She had seen Creekstone's processing plant, designed by scientist Temple Grandin. Brisson appreciated the humane handling of cattle there. And she knew that Creekstone steaks have the flavor that her customers crave.

"I think the American palate is used to the corn-fed finish in beef where it almost gives you that buttery popcorn kind of flavor," she said. "And when we impart dry-aging on top of that, it's the perfect pairing."

Plus, Brisson has done the math and knows it's feasible to sell her steaks at prices "comparable to industry standards for wholesale beef." That's currently around $25 to $35 per pound for a dry-aged, Cryovaced steak. (Keep in mind that dry-aged beef tends to be pricier than other beef because it loses moisture and becomes lighter during the aging process.)

"You're getting a prime product, but it's not exorbitantly expensive," Brisson said. "I want to make it approachable."

The 12 Best Meat Delivery Services to Bring Steak, Chicken, Pork, and More to Your Door

Brisson brings a lifetime of influences and experiences to Bistecca di Brisson. She grew up in upstate New York, and her grandfather owned a restaurant where her mother worked. Brisson's mom cooked at home with produce from her own garden and nearby farms. During the summer, Brisson would help her family with canning ingredients that would get them through the winter. She then started working at a local farm-to-table restaurant when she was 15.

At 21, she went to Italy and worked at Cecchini's butcher shop in Tuscany. She still stays in touch with Cecchini, who's been her most important mentor over the years.

"He treats me like a daughter," she said. "Our connection was so palpable when I was 21. Even now, after 20-something years, it brings tears to my eyes. He's just been such an influence on my career. His love of beef and his love of what he does is so infectious."

With the skills and confidence she acquired in Italy, Brisson worked at several high-profile Vegas restaurants (including Bartolotta Ristorante di Mare) before becoming executive chef at Carnevino.

"When I started at Carnevino, it was an anomaly for a young petite female to be running a steakhouse and being covered in fat and blood and managing a dry-aging room," she said. "For me, it was so much like chopping wood in upstate New York. It was that labor of love. It's physical. It's endurance. But I loved it so much because it's so gratifying."

"I felt like when you took it above 100 days, that's when you really got some of the funk," she said. "It's not for everyone, but it's something that's sought after. Once you recognize that flavor profile, you'll want it again and again."

Now at Brezza, where she just added a brunch menu with her own housemade salumi and where she hosted a launch event for Slow Food Vegas on September 3, Brisson continues to show customers that time is an important ingredient.

"Dry-aging is an artisanal process," she said. "Before we opened in Resorts World, I obviously wanted dry-aged beef because it's such a part of my work, my repertoire, who I am." 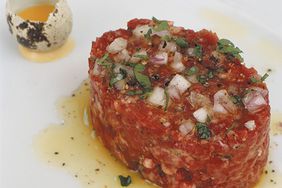