One part comic genius, one part cookbook author, Eric Wareheim stirs together practical advice about cocktails and ice luges garnished with plenty of awkward stares in his cookbook “Foodheim.”

These "facts" were delivered with deadpan elan by John C. Reilly, playing the inimitable Dr. Brule on Eric Wareheim and Tim Heidecker's low-budget comedy series Tim and Eric Awesome Show, Great Job! which aired on Adult Swim in the late aughts. The show's co-creators are comedy icons Tim Heidecker (who played Jan Skylar) and Eric Wareheim. Speaking by phone from New York, Wareheim tells me that John C. Reilly was drinking "mostly grape juice, but did have some wine" while filming the episode — a must-watch on YouTube.

Today, a wine-stained artist's rendering of Reilly's visage as Dr. Brule graces the label of "Sweet Berry Wine," a Mendocino County red blend crafted by Joel Burt, the talented and meticulous winemaker and co-owner with Wareheim of Las Jaras Wines.

All of this is to say that while Dr. Brule's "Sweet Berry Wine" comedy sketch began as a wine-stained laugh-out-loud mockery of a wine country wine tasting, Wareheim continues to laugh last as a self-taught, real-life aficionado of wine, food, and cocktails, and a bestselling cookbook author.

Dr. Steve Brule Is Getting His Own "Sweet Berry Wine"

In the fall of 2021, he released Foodheim: a Culinary Adventure, co-authored with Emily Timberlake, who calls Wareheim "an amazingly funny and talented writer." It's a one-of-a-kind cookbook, laden with awkward stares, fantastic recipes from Wareheim's grandma, wine education including advice on sabering Champagne, and behind-the-scenes culinary insights gathered while filming on location for the similarly food-obsessed show, Master of None. There are essential ingredient recommendations, infographics on proper taco form, a chapter on small horses, and lessons on wine, all before the final chapter on cocktails.

During comedy tours of Tim and Eric, Wareheim spent his off-stage hours sinking his fork into a world of culinary discovery. During one fateful visit to Top Chef winner Michael Voltaggio's The Langham in L.A., Wareheim was accompanied by ​​Food & Wine Best New Chefs Jon Shook and Vinny Dotolo of Animal, Son of a Gun, Trois Mec, and Jon & Vinny's fame.

"When Jon and Vinny took me, Aziz Ansari, Alan Yang, and Jason Woliner to Langhams, we got a tour of the kitchen," recalls Wareheim, "and having Jon and Vinny there to explain the preparation of the meal was eye-opening." Wareheim was amazed that certain dishes required so much preparation and still, he decided to poke the bear. His social media followers had begun voicing deep concerns and frustrations whenever he posted pasta pics. So, he doubled down on the bit. turned the jokes up a notch and became a self-professed food critic, teaming up with Anzari on a web-based restaurant review show, Food Club.

"At the time, Michelin was the new buzz," Wareheim says referring to the legendary dining guide's first foray into Los Angeles' restaurants, "So we launched Food Club and developed our own award system in response. Instead of stars, we either awarded a plaque in admiration or burned it in front of the restaurant. It was all about taking things too far because, why not?"

He and his opinionated comic companions offered a hilarious respite from serious critiques, and then things became hilariously real, indeed. With the 2021 debut of his cookbook, Wareheim became a culinary auteur, descending from the mountain with nearly 300 pages of food and drink wisdom, earning a place on multiple best of 2021 cookbook lists, including The New Yorker, Eater, and more.

The cocktail hour, in Wareheim's view, is an opportunity to "collect your thoughts" and "whet your appetite before dinner." A chapter on the "Spritz Life" asserts that "American happy hours are too aggressive" and admirably encourages the Italian-minded aperitivo hours with lower-alcohol drinks like a Campari or Amaro Spritz. (My favorite is a recipe riff on the Negroni with a lower-ABV version called the Negroni Sbagliato, which eschews gin for effervescent Prosecco.)

Wareheim's tastes are focused in tradition when it comes to cocktails. "I say American steakhouse '50s and '60s classic martinis are what I consider classic," he tells me and credits bartender Devon Tarby (formerly of LA's The Varnish) with inspiring his tastes. Tarby is a partner at Proprietors LLC and Death & Co LA — a collective of spirit-masters who have helped define the classic cocktail for the 21st century drinker.

"I got into Tiki drinks at first and realized I was getting sick because of all the sugar in the drinks," Wareheim says. "In Foodheim, I wanted to focus on cocktails that are stripped down without adding too many flavors." He notes that a well-balanced spirit-forward drink is the best way to kick off a meal before transitioning into wine. "Then I'm back to Amaro or Cognac with a rock and an orange twist."

Martinis are "definitely stirred," and Wareheim says to "take your time, and get it super cold." For garnishes, like lemon, lime, or orange twists, "I rub it on the rim when I'm feeling prissy."

On a decidedly non-prissy front, "The ice luge was my signature before I got very serious," Wareheim says, referring to the giant ice sculptures of his head that were turned into luges at various house parties back in the day. At present, he contends that the perfect ice comes from water circulated through a reverse osmosis filter in his house, poured into ice molds set in the freezer. But really, any filtered water will do, though, molds and tools are essential.

Wareheim encourages memorizing eight staples: the Manhattan, Margarita, Daiquiri, Martini, Negroni, Corpse Reviver No. 2, Highball, and the Bloody Mary. But no matter what you do, he still believes that spirits funneled through an ice luge with your BFFs and loads of caviar are the ticket to a "Bliss Mode Party."

Get a copy of Foodheim and then prepare a generous gin Martini (page 267) — with dry vermouth for rinsing, two-and-a-quarter ounces gin, Castelvetrano or blue cheese-stuffed olives for garnish — and journey cover to cover through Wareheim's spirited culinary and liquid adventure book. But be warned: "Small horses are beautiful," writes Wareheim, "but they are for petting, not for eating." 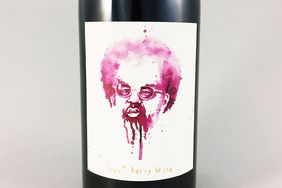 Dr. Steve Brule Is Getting His Own 'Sweet Berry Wine'