Since its 2006 debut, Top Chef has turned Tom Colicchio and F&W's Gail Simmons into food celebrities, introduced Americans to cooking with vending-machine food and created a wave of chef-testants turned restaurateurs, who have become a large and profitable niche in the food industry.—Katherine Sacks

Top Chef: Chicago victor Stephanie Izard kept in touch with fans via a blog, an enthusiastic Twitter account, and behind-the-scenes videos before opening Chicago’s Girl & the Goat in 2010 and earning her spot as an F&W Best New Chef 2011. Izard emphasizes a bold mix of Mediterranean and Southeast Asian flavors in dishes like grilled octopus with guanciale and pistachio-lemon vinaigrette, and wood-oven-roasted pig’s face with tamarind and red-wine–maple sauce. Her second venture, Little Goat, opens in November, and is modeled after the East Coast diners she frequented as a child. The menu will feature items like a patty melt, a club sandwich with house-cured bacon, and malted milk shakes. The location will also expand the Goat empire with a demo kitchen, classroom and more space for Izard’s already stellar bread program. girlandthegoat.com

Less focused on fame and book deals than most, Top Chef’s first winner, Harold Dieterle, is already working on his third New York restaurant. His first project, Perilla, became a neighborhood favorite thanks to the satisfying New American menu with global accents. Dieterle brought a contemporary interpretation of Thai flavors to his second Greenwich Village outpost, Kin Shop (left), where he makes curry pastes from scratch. At The Marrow, opening this fall, Dieterle will look to his heritage for a menu that’s “meat-focused, with strong Italian and German influences,” he says. “It’ll be an opportunity to try some new things that I haven’t had a chance to focus on.” perillanyc.com; kinshopnyc.com

For a taste of the modernist cuisine that won Michael Voltaggio Top Chef: Las Vegas—dehydrated potatoes, burnt-wood ice cream, yogurt curds—head to his new Melrose Avenue hot spot, ink. There, the tattoo-loving chef crafts playful, stunning dishes. His take on the Canadian comfort food poutine trades the traditional ingredients for chickpea fries and lamb’s neck gravy. Just a few doors down is ink.sack (left), where sandwiches are served in 4-inch “taste” portions. Options include a Reuben with corned beef tongue and tangy Swiss Appenzeller cheese, and “The Spanish Godfather,” an ode to chef José Andrés, with a selection of cured imported meats. mvink.com

Inspired by his family’s Filipino heritage and a former gig cooking upscale Chinese at Buddakan, Dale Talde (of seasons 4 and 8) serves Asian dishes with a homey spin at his new Park Slope restaurant. Dumplings come wrapped in crispy-salty pretzel dough, and crunchy Korean fried chicken is served with sweet cherries and spicy kimchi. His second project with partners David Massoni and John Bush is the food-lovers’ dive bar Pork Slope, which has a pool table, an extensive whiskey list, more than 30 kinds of beer and an unapologetically lowbrow menu of pork cheeseburgers, Tater Tots and everything-bagel spring rolls. And Talde just took over the kitchen as chef-partner of Massoni’s first restaurant, Thistle Hill Tavern, expanding his reach into the Park Slope market with an American pub menu. taldebrooklyn.com; porkslopebrooklyn.com

A finalist on the first season of Top Chef and on All-Stars, Tiffani Faison cooks her way through an impressive 1,500 pounds of meat a month for this Texas-style barbecue joint, working with sustainably raised Angus beef and Berkshire pork. (Faison is particularly proud of the pork belly, which she cures, brines and smokes to achieve a meatier and less fatty texture.) Located near Fenway Park, Sweet Cheeks also has an expansive whiskey list and an outdoor beer garden. sweetcheeksq.com

Whitney Otawka returned to Athens after appearing on Top Chef: Texas. A former sous-chef at 5 & 10 for superstar Southern chef Hugh Acheson, Otawka now runs the restaurant Farm 255, which sources ingredients from its own co-ops, Full Moon Farms and Moonshine Meats. Otawka cooks sustainable comfort food like Farm Egg in a Jar: a Mason jar layered with potato puree, kale, chorizo and a coddled egg. Her Farm Cart is a vintage trailer that stops by local markets with items like a veggie bahn mi and house-made sausages. farm255.com

Top Chef: Miami competitor Dale Levitski took over the kitchen at Sprout in 2009, reinvigorating the neighborhood restaurant with adventurous dishes like foie gras with watermelon, cucumber and saba (grape must syrup) vinegar. At Frog n Snail, his new Lakeview bistro, Levitski is experimenting with revamping Euro dishes, like duck l’orange with a cinnamony duck confit pierogi. “It is a very fun and interesting challenge to look at the skeleton of a classic dish and play with it,” he says. sproutrestaurant.com; frognsnail.com

Known to reference his Italian grandma’s cooking on Top Chef: Las Vegas and All-Stars, Mike Isabella now pays tribute to her Sunday suppers at Graffiato. The minimalist spot serves pastas as small plates, including a version of nonna’s hand-cut spaghetti with cherry tomatoes; it also turns out fantastic, wood-grilled pizzas. Isabella recently opened the Mexican-themed Bandolero, which nods to his experience cooking at Philadelphia’s El Vez with a mescal-heavy cocktail list and offerings like shrimp cocktail with charred tomatoes, and crispy short rib nachos. graffiatodc.com; bandolerodc.com

Kevin Sbraga became an instant Philly hero after winning the title of Top Chef: Washington, DC. At his prix fixe only Avenue of the Arts restaurant, Sbraga combines global influences, like his Greek red-wine braised octopus with fiery African piri piri pepper sauce or pumpkin tortellini with Thai green curry sauce. The dining room itself is outfitted with 80 percent repurposed materials and reclaimed wood, but sustainability isn’t the chef’s only ambition. “Making sure this is one of the best restaurants in the country is the goal,” says Sbraga. sbraga.com

Top Chef: Texas finalist Sarah Grueneberg rose from line cook to executive chef at this esteemed Italian restaurant owned by Tony Mantuano (Top Chef Masters Season 2). She now works side by side with Mantuano, cooking a menu of handmade pastas and wood-roasted entrées. The duo regularly travel to Italy for inspiration (they’re currently exploring Mantuano’s roots in Calabria), bringing back ideas and ingredients. One of Grueneberg’s favorite finds is a honey she helped pollinate in Venice last summer and recently used to glaze doughnuts filled with a grappa-infused cream. spiaggiarestaurant.com

Two TC alumni are behind this inventive surf-and-turf spot. For his fifth restaurant, Top Chef: Miami’s Brian Malarkey tapped Top Chef: Washington, DC contestant Amanda Baumgarten to oversee a menu with dishes such as clam-and-bone marrow pizza and local uni with lardo. Malarkey’s plans for the next five years revolve around national expansion, starting with an outpost of his flagship seafood restaurant, Searsucker, opening in Scottsdale in November 2012. herringboneeats.com

“My nana was a firm believer that if a braise was missing something, it could always be made better with a wee bit of Marmite,” says Top Chef: Chicago competitor Mark Simmons who channels his New Zealand upbringing for this Park Slope spot. It’s a philosophy he adheres to in dishes like baby back ribs braised in the savory, umami-rich condiment. Other popular Kiwi ingredients make appearances: horopito pepper, a flowering evergreen with a peppery bite; and Golden Syrup, a cane sugar sweetener used in desserts. kiwiana-nyc.com

Spike Mendelsohn’s Capitol Hill restaurant Good Stuff Eatery gets its name from the words his restaurateur grandfather used to say when biting into a cheeseburger. The former Top Chef: Chicago contestant also borrowed a few other tips: “We wrap our burgers in wax paper, just like my grandfather did.” The Prez Obama burger (bacon, red onion marmalade, blue cheese and horseradish) is a clear neighborhood favorite, beating out the McCain burger during the restaurant’s 2008 election-inspired contest. Besides classic burgers, the restaurant specializes in herb-tossed fries and toasted-marshmallow milk shakes. For his next project, Mendelsohn is teaming up with sister Micheline to open the brasserie Béarnaise this winter. goodstuffeatery.com

The cocky runner-up on Top Chef: New York, Stefan Richter makes a loud statement with his swank Santa Monica restaurant, decorated with abstract art and blazing fire pits. The food combines his Finnish and German upbringing with unusual twists—oysters are served with absinthe Jell-O. Richter has also appeared as a guest judge on the Finnish TC spin-off. stefansatlafarm.com

At Catch (no relation to chef Hung Huynh’s restaurant of the same name), Top Chef: Texas competitor Keith Rhodes uses Port City markets’ seafood and demonstrates a reverence for vegetables, something he acquired during his childhood. “My mother was a Seventh-day Adventist,” says the chef. “Growing up we practiced a vegetarian diet, so the organic, natural lifestyle is a lot of my soul.” His NC Sweet Potato Salad is an ode to those ideals, combining diced sweet potatoes with shelled hemp seeds, local goat cheese, baby spinach and strawberries or macerated cranberries, depending on the season. catchwilmington.com

Arnold Myint, a contestant on Top Chef: Washington DC, has made a name for himself in Nashville with his bold approach to Asian-fusion cuisine and three popular restaurants. Myint’s PM offers the Thai flavors of his childhood, while Cha Chah is a Mediterranean tapas-style restaurant. At his latest opening, Suzy Wong’s House of Yum, Asian classics are transformed into comfort foods like wonton nachos with pulled pork, avocado maki rolls and Thai chile chicken wings. suzywongsnashville.com

Top Chef: Los Angeles winner Ilan Hall’s restaurant emphasizes all corners of his heritage through the unconventional pairing of Scottish and Jewish cuisines. Located in downtown Los Angeles in the Old Hollywood-style Alexandria Hotel, The Gorbals’ fusion yields such concoctions as bacon-wrapped matzoh balls and latkes with smoked applesauce. thegorbalsla.com

After running the kitchen at Atlanta institution Woodfire Grill (left) for four years, Top Chef: Las Vegas finalist Kevin Gillespie is moving on to his next project—Gunshow, named in homage to his favorite childhood pastime. Slated to open in early 2013, Gunshow will have a more free-form style of service, with no menu and a format that recalls traditional dim sum. Gillespie will send his rustic, Southern-inspired dishes out to the dining room, letting guests choose items as they come out. “If you want it, you take it, if you don’t want it, that is fine too,” explains Gillespie. “You are the one in charge of your experience.” In the meantime, fans can try his food via recipes from his newly released book, Fire in My Belly.

Working for nearly a decade for seafood genius (and frequent TC judge) chef Eric Ripert gave Jen Carroll some serious culinary backbone. After competing on Top Chef: Las Vegas and All-Stars, she’s now planning to open her first restaurant next spring, named in part for her edgy yet fun personality. Her upcoming “dock-to-dish” concept is a collaboration with several Montauk, New York, fishermen; Carroll hopes to eventually offer her customers fish shares, similar to a CSA model. The menu will have a healthy slant: One prospective dish is a salad of mizuna (a Japanese mustard green) with spicy yogurt vinaigrette. Fans can catch Carroll’s restaurant planning and more of her feisty charisma on Life After Top Chef. 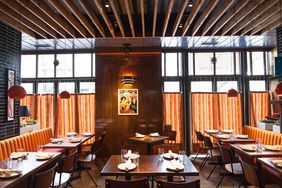 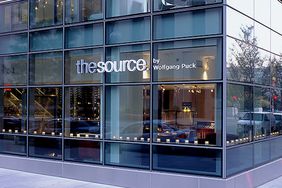 Best Museum Restaurants in the U.S. 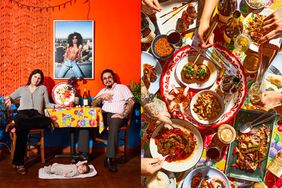 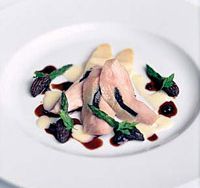 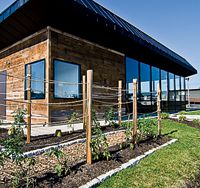