These Remarkable Grocery Stores Are Sure to Transport You

For many cooks, immigrants, and travelers, international grocery stores aren't just a collection of aisles and brightly packaged products. They're a portal to another place—one where ingredients evoke a powerful and nostalgic connection to identity.

For writer Naz Riahi, the Iranian grocery stores of Orange County, California, are a conduit to family and heritage and the homeland she left over three decades ago. The aroma of hot flatbread from the bakery counter doesn't just take her back to her childhood in Tehran—it binds her to her mother and brother. It's a sentiment echoed by Mandy Baca, a first-generation American eager to discover her Nicaraguan roots. In her ode to Sedano's, the Hispanic supermarket chain with 35 outlets in Florida, Baca describes how her shopping experiences there were a way to embrace her Latin heritage and unfamiliar ingredients while growing up in a household trying to assimilate to the American way of life.

Similarly, ingredients procured from New York City's most iconic grocery store—the Jewish appetizing counter Zabar's—have a way of giving writer Margaret Eby a sense of grounding and belonging in her adopted city, one that is underscored by a special friendship and a surprising link to the store. These stories, filled with memories and emotions, reveal that grocery stores are inevitably more than places of commerce—they are places of community and connection. —Melanie Hansche

When I first immigrated to the U.S. from Iran at the age of 9, I was as enthralled by American grocery stores as I was by MTV. The grocery stores, with their perfect mix of ascetic cleanliness and colorful cheer, were like amusement parks full of wonder. They were places where I could feel happy. My new suburban life was a long way from Tehran and its overstuffed and dusty corner stores where we bought canned goods and toilet paper, or the farm where we picked up milk in large plastic bags to pasteurize at home. Read More.

Get the Recipe: Kashke Bademjan (Iranian Kashk and Eggplant Dip)

First-generation Americans tend to share a common experience in their search for place and identity. While Miami is Hispanically diverse, with its large Cuban, Nicaraguan, Venezuelan, and Colombian communities, the age-old cultural limbo persists; as a native Miamian with Nicaraguan immigrant parents, I've never personally felt either quite American or quite Latina enough. Growing up, assimilation for my parents meant strictly shopping at our local Publix. At home, the Latin dishes that my parents prepared were simplified and presented in Americanized ways: lasagna was served with a side of tostones, quesadillas were replaced with queso blanco grilled cheeses, and on Thanksgiving, we ate ham with pork stuffing. Read More.

Get the Recipe: Vigorón (Nicaraguan Cabbage and Yuca with Chicharrones)

The reality and mythology of living in New York City rarely overlap, but Zabar's is one of the few places they do. Founded in 1934, this emblematic Jewish appetizing counter is packed with bagels, lox, rugelach, and pastrami, and also serves as a neighborhood grocery store selling all manner of packaged goods, from ground coffee and smoked salt to fancy jams. It is also a portal into a New York City that lives, mostly, in fiction—where Kathleen Kelly runs into Joe Fox in You've Got Mail, and where Ilana guides Abbi "to the mayo-based salads!" in an episode of Broad City. It's a place where tourists and New Yorkers alike can cosplay living in a version of Upper West Side Manhattan that exists mostly in Nora Ephron scripts and Fran Lebowitz quips. Read More.

Get the Recipe: Opulent Grilled Cheese
Was this page helpful?
Thanks for your feedback!
Tell us why!
Related Articles 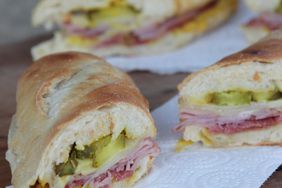 This Miami Supermarket Chain Makes Me Feel Like Myself

Zabar's Is Where I Go to Cosplay Being a New Yorker