Rice grits, also known as broken rice or middlins, have the same porridge-like smoothness of grits or polenta, but with more heft for sopping up sauces and gravy.

You can't talk about rice grits, or about rice in the United States, without talking about slavery. Enslaved people from West Africa cultivated rice in South Carolina and Georgia, one of the crops that formed the cornerstone of the local economy for decades. Rice grits, also known as broken rice or middlins, were a byproduct of readying Carolina Gold rice for export. Enslaved people would pound grains of Carolina Gold rice with a mortar to polish them, and sieving them through a basket. The long grains of rice that survived intact, roughly 70 percent of the crop, would be packed up and sold. The bits that did not survive, called middlins, shorts, broken rice, or rice grits, became a staple of Lowcountry cuisine, and of the food of the Gulla Geechee people, direct descendants of the West Africans brought to this country against their will to work in the rice harvest.

On a chilly day this past January, what feels like a lifetime ago, I ate rice grits at the Staten Island Museum, courtesy of a rice testing and lecture put on by Chef BJ Dennis, a Lowcountry chef and Gullah culinary historian. Dennis traveled to Trinidad to hunt down the exact rice varietal that his ancestors cultivated in the Lowcountry. At the tasting, he presented a handful of different kinds of rice, including the highly coveted long grain Carolina Gold rice and a dish of shrimp and okra over rice grits. I came away from the dinner with a new appreciation for the complexities of rice in American history, and a new-found obsession with rice grits.

Aside from being historically significant, rice grits are also just plain delicious. Broken rice isn't just a Lowcountry thing—it's a staple of Vietnamese cuisine, and also popular in Senegal and Bangladesh, among other countries. Cooked, the rice grits have the heft of a bowl of rice, but the texture is closer to a sticky porridge. They're a perfect vehicle for sopping up a good sauce or gravy, or just for absorbing a runny egg yolk and a tablespoon or so of chili oil. You can buy excellent ones from Anson Mills, a company dedicated to revitalizing heritage grains from the Low Country. Delta Blues, a Mississippi family-owned rice grower, also sells excellent rice grits that I picked up the last time I visited my family in Jackson.

You can also make rice grits from long grain or jasmine rice, like our Editor-in-Chief Hunter Lewis does. Lewis, who is similarly obsessed with rice grits, makes them in the blender. "Basically all I do is whir rice in my Vitamix for a few seconds until the rice is broken up into pieces. I did this first to make congee on the regular but it emulates the middlins/broken pieces of rice," he told me.

To make rice grits, the rule of thumb is to use more water than you typically would for making rice. I suaully go with a ratio of four cups water to one cup rice grits. Anson Mills recommends a ratio of six cups of water to one cup of rice grits, but ten recommends straining the grits and letting them cool spread out on a pan in the oven. Do what you feel comfortable with, but it starts out the same. In a medium-sized pot, bring the water to a boil, put in the rice and a good pinch of salt and turn down the heat so that the water is just simmering. The grits take between 15 and 20 minutes to cook, and they're done when the consistency is creamy and the rice no longer has any bite to it.

What you do from there is up to you. Gullah Geechee chef and food writer Amethyst Gannaway swaps them out for regular rice for variety, but really she'll use them on "any meal that involves some sort of gravy," she told me. "I like making goat and lamb dishes with them, and fish."

Rice grits are ideal with a stew or something with a lot of good sauce on there that needs sopping up. I've eaten braised short ribs on them, and chana masala, but my favorite way to eat them is with some garlicky sauteed greens and a fried egg. They're also good with a few cracks of black pepper and a sprinkling of Parmesan, or a pat of butter. You can treat them like grits, or you can treat them like rice, and neither way would be wrong. 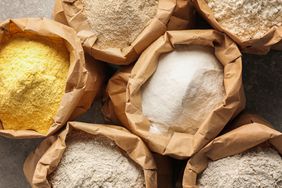