How Joining the Army Inspired Pamela Jones to Launch Charboy's

Enlisting in the military and traveling the world motivated Charboy's founder Pamela Jones to open her own restaurant—and eventually launch a line of sauces.

In 1980, as a 17-year-old soon-to-be high-school graduate, Pamela Jones says she had a choice to make: she could go out in the world on her own or she could get married. Since she wasn't ready to get hitched, the Flint, Michigan, teenager thought to herself, How am I going to go out there as a single woman? This a big world. That thought, she says, led her to the local Army recruitment center, where she learned the Army would take care of her housing, her food—almost everything. So Jones graduated from high school, packed her bag, and joined the Army the next day.

At this point in the story, you might be wondering what the heck Jones' time in the military—a total of 17 years split between the Army and Navy—has to do with her founding Charboy's, a wildly successful line of sauces carried now in Whole Foods and on Amazon. And the answer is simple: she learned to cook, really cook, in service.

As the eldest of three children, Jones was no stranger to the kitchen. She often made meals for her younger siblings to help out her parents, who both worked full time. But in the Army, and later, in the Navy, Jones traveled the world. "I learned the herbs are different, the land is different," she describes. "In Italy, for example, the pizza is different. People here think they are eating pizza, but they are not eating real pizza."

That new food knowledge—plus years spent in the legal sectors of the military—gave Jones the confidence she needed to lead her own kitchen. "When I got out [in 1997] the first thing I did was open a restaurant, because I was still really excited about food and I wanted to use all those things I had learned," Jones recalls now.

Her restaurant—and later, restaurants—in Chicago were successful, but Jones says she knew a way to make them even better: add her father's homemade BBQ sauce to the menus. But her father wouldn't budge. Jones pleaded with him for years—in her estimation, as many as 10—to give her the secret recipe, but her father refused her.

"He said, 'I will come down [to the restaurant] and make you a batch,'" she recalls.

On her own, Jones couldn't replicate the sauce. "BBQ can be sweet or tangy, but this sauce had a combo of sweet—but not too sweet—and a little tangy, and it also had a little spice," she describes. "It had like a Kansas City flare." Jones needed that recipe.

Finally, during a visit to her parents' house, Jones' father came into the living room clutching a crumpled piece of paper. "The paper had to be from the 1940s," Jones laughs. "I grabbed it and said, 'Thank you, thank you, I won’t let you down.' I told him this would be the first line of sauces that I came up with." And Jones kept her word.

As the BBQ sauce and her other three housemade concoctions gained popularity in her Chicago establishments, Jones realized she had the chance to bring the sauces to a larger audience. But she soon learned that launching a line of sauces wouldn't be as simple as cooking the sauces and bottling them in one of her restaurant kitchens.

It took Jones a year to bottle 100 cases of sauces. In that time, Jones had to design labels and find a label company. She had to source the bottles. She had to comply with regulations on nutrition facts and ingredients lists. She had to make the sauce. She had to test the acidity, the shelf life, and determine accurate expiration dates. And she had to figure out where consumers could go if they had complaints to air.

She went to the grocery store and studied her competitors. "I wrote them all down," she says, "and I decided what I was going to do differently to stand out on the shelf."

She paid for every piece of the puzzle herself—including the real bourbon in her bourbon sauce. "No one would give me any money," she says. "I really struggled. But because I believed in my dream, I said, 'OK, I’ll just use my credit card." Finally, she was approved for a small business loan of $12,000 from Brewing the American Dream—a philanthropic program created by Samuel Adams founder Jim Koch—and paid her credit card debt.

But the work wasn't over. Now, Jones had to find a way to get bottles on shelves.

With her cases in tow, "I went door to door to mom-and-pop stores [in Chicago]," Jones says. "I knew I couldn’t go right away to the big branch stores." In each store, she would ask for the owner, but if she or he wasn't there, Jones' persisted—she would schlep back to the same block the next day, and the next, until she got an audience. "I would give the owner samples, and they would say, 'I'll take one case,' and I would say, 'OK, but I bet you will be done with that case in an hour or less.'"

Once her sauces were in a small store, she would set up an electric skillet and sauté vegetables, giving out samples of her sauces to anyone who walked in the door. "I would say to the owner, 'the demo just started and I've already sold one case. Can I open another case?' And they would always say 'OK,'" Jones recalls.

Using her door-to-door sales approach, Jones' sauces made it into 25 stores. Then she went to a small grocery chain in Chicago, which eventually gave all its stores.

"I did those stores well," says Jones. "I made sure I didn't leave things in the back, I lugged in cases and stocked my own shelf, and checked on each store individually."

Soon, another grocery chain gave her 186 stores. "That was when I got my biggest order—it was double digits," she recalls. "I was used to getting a $150 check here, a $300 check there, and this was a $2,000 purchase order. They'd put me in all their stores and ordered up. I was screaming at the top of my lungs, I was so excited."

She continues, "From there, I got Whole Foods, and from there, Amazon. And that was so rewarding—it felt like all my hard work was finally, really paying off."

Jones' says she owes her success to hard work and determination. "Internally, you have to have that drive—you have to have it inside you to prove yourself," she says. "A lot of people can give up really quickly. This has to be your dream for it to work." 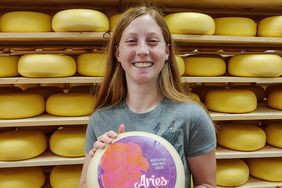 This Teenager Is One of America's Best New Cheesemakers 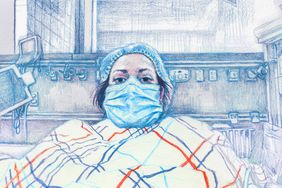