Chefs gravitate toward the 25% fat-to-lean ratio of Ōra King salmon, calling it "the Wagyu of the sea."

During a trip to Las Vegas, while lunching at the revamped Top of the World – the restaurant rotates 800 feet off the ground and is reportedly the highest one in Sin City – I was a little surprised when then-executive chef Pawan Pinisetti suggested that I try the pan-seared salmon.

As far as underwhelming fish dishes go, that one sounded likely to be up there. It's not exactly what chefs typically offer when they want to show off. But, sure, I told him, I'll have some salmon.

Then the fish came out — all crispy on the exterior, rare and juicy on the inside — and the thing pretty much blew my mind. Hands down, it was the best salmon I'd ever tasted. Succulent and rich, it transcended salmon as I'd known it. I likened it to eating ordinary steak all your life and then being served a fat-oozing slab of Japanese A5. I soon found out that this particular cut of salmon — actually king salmon, imported from New Zealand — was farm-raised (normally a red flag, but, as explained below, not in this case) and marketed under the brand name Ōra King. (Home cooks can buy the salmon online here at $37 a pound.)

Pinisetti told me that he'd tried it for the first time years ago while eating at Shawn McClain's now-shuttered Sage, inside Aria. "The sad thing is that when I say this is Ōra King, people nod their heads and don't know what I'm talking about," Pinisetti said, adding that the fish ran him twice what he would pay for ordinary salmon and demanded a rather steep but worth-it menu price. "People order it well-done, start eating, and ask how it can still be buttery inside. They love it. Get this fish with a pink center, and it is really something else. It's the Wagyu of the sea."

Apparently, Ōra King is nothing new to the likes of Daniel Boulud, Nobu Matsuhisa, and Thomas Keller, who are all said to have served the fish. Chefs gravitate to the 25% fat-to-lean ratio, a visually luscious orange-red flesh color, and sweetness that you rarely get with salmon. According to Michael Fabbro, Ōra King's former vice president for North America, that can be attributed to several factors: the ultra-clear water in which the fish are raised; the fact that their living conditions mimic those of wild salmon (except that they don't need to swim against the current, which helps account for the high percentage of fat); selective breeding; and a special feed formula that includes vegetable protein and oils while being less reliant on wild fish than is the norm. Monterey Bay Aquarium Seafood Watch gives Ōra King its top rating for sustainability.

Of course, all that said, the proof is in the flavor of the fish when it's served as sashimi (as is the case at New York's highly regarded Sushi Yasuda) or cooked in a pan. Since it's now available to home chefs — Fresh Direct is among the outlets selling Ōra King salmon — I wanted to see how a pro handles the product. So I made an appointment to meet with chef Matt Lambert in the subterranean kitchen of the Musket Room, the Michelin one-star restaurant in the Nolita neighborhood of Manhattan he then helmed.

He began using the fish while a chef in his homeland of New Zealand. When he'd first arrived in America, Lambert was initially concerned about the freshness, with Ōra King salmon being shipped from so far away. "But it gets here 36 hours after being caught," Lambert said, beginning to break down a 15-pound whole fish, pointing out that its clear eyes signal the speed with which the swimmer arrived. "Considering that you want the fish to go through rigor mortis before cooking, the timing is perfect."

As to what draws Lambert to Ōra King: "It's consistent and the best salmon out there. I wouldn't use it otherwise," he said, even though he likes the fact that he and the salmon share a nationality.

Before cooking the fish, Lambert suggests refrigerating it for a few hours (or more, depending on the air circulation of your fridge), on a plate, uncovered, in order to dry the skin a little bit. That makes it likelier to crisp properly. Pointing out marbling that runs through the salmon's flesh — which helps account for the rich flavor — he advises a simple preparation: Place a little bit of oil (preferably a mix of canola and olive) in a frying pan, get it nice and hot, then lay in the salted fish skin-side down so that it crisps up. He cautions against flipping it and monitors doneness through a change of color that rises from the bottom and by resting a finger on the flesh. He feels the fish blistering and uses that to help gauge when it's finished. Cooking time, at least on Lambert's stove, took just a few minutes.

That version of the fish tasted as good as I remembered it being when I ate at Top of the World. Then Lambert busted out another iteration, which was a point of pride on the Musket Room's tasting menu. Lambert and his crew began the preparation by curing and lightly poaching the fish. Then its flavor got amped up with horseradish yogurt, pickled apples, apple powder, and a topping of peppery herbs plus sunflower seeds. The dish was a fresh explosion of seemingly disparate flavors that combined with unexpected unity.

"People like it a lot," said Lambert. "Especially because they don't anticipate much from salmon. That is terrible to say, but it's true." Nevertheless, he added, "I have a couple of go-to [ingredients], and Ōra King is one of them." 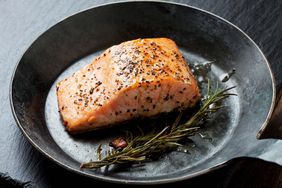 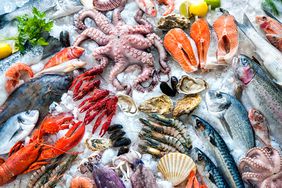 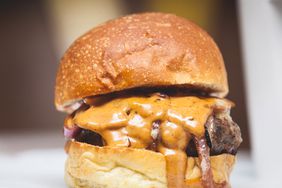 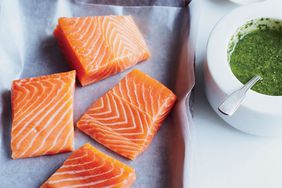