"The pleasure difference between an excellent omelette and a good omelette is vast."

An omelette may seem like the ideal brunch option, but in France, it's a far more frequent dinnertime dish — and a highly technical one, at that. Rolled rather than folded, the ideal French omelette is very pale yellow in color, almost impossibly even in shape, and just barely set on the inside. (Note: Because we are talking about French technique, we'll use the French spelling for this article, merci.)

For chef Christian Constant, a former Top Chef France judge and owner of several Parisian restaurants, the classic French omelette is a dish that's perceived simplicity is belied by a requisite technical precision.

"In my day, when a commis came into the kitchen, I would ask him to make one, and I judged him on it," says Constant. "A good commis should know how to make a nice omelette."

Chef Yves Camdeborde, founder of the Comptoir du Relais Saint-Germain and widely touted by French culinary journalists as the instigator of the current neo-bistro trend, began his career in this golden age of the omelette. "I was lucky enough to make them during my apprenticeship, a long time ago," he says. "When you're an apprentice, you spend practically a year learning how to make an omelette."

His assiduity and attention to detail rendered the dish Camdeborde's culinary good luck charm when, at 16 years old, he was (randomly) assigned the task of making omelettes during both his CAP (professional aptitude certificate) and the regional selection for Meilleur Ouvrier de France.

"I can do it with my eyes closed," he says. "Unfortunately, omelettes aren't being taught anymore these days because there are fewer restaurants serving them." Indeed, despite the presence of revisited classics like croques monsieurs and oeufs mayonnaise on neo-bistro tables, omelettes — revisited or otherwise — are a rarity on restaurant menus.

"Omelettes require a dedicated cook, and results can be variable," says Daniel Rose, an American-born chef with restaurants in Paris and New York. "The pleasure difference between an excellent omelette and a good omelette is vast."

This, for Camdeborde, boils down to one factor and one factor only: "It's hard to do," he says. "That's it."

When it comes to the proper technique for a truly great French omelette, there are two major schools of thought. The most traditional is the rolled omelette, a dish that is served "nicely rolled, and with the ends nicely folded," according to Camdeborde.

To achieve this look, Camdeborde starts by gently mixing lightly beaten eggs in a pan set over low heat, until curds begin to form.

To do so, Camdeborde explains, one lifts the side of the omelette closest to hand with a fork, gently rolling it up on itself.

"For the other side, normally, if you just hit the pan handle with your hand, it rolls itself," he says. "It's a skill you have to learn."

Constant has a similar technique, vigorously beating three eggs per person with salt, pepper, and a small spoonful of crème fraiche before cooking them in a mixture of oil and butter. When the omelette has been turned out on a plate, seam-side down, he tucks the ends under themselves with a towel before brushing the pillowy surface with a bit of butter.

Other chefs prefer a folded omelette over this classic rolled delicacy, a version of the dish perhaps best demonstrated by La Mère Poulard. The Mont Saint-Michel restaurant has been serving these puffy omelettes, the house signature, since the late 1800s.

While the precise recipe is guarded quite secretly, one part of the mystery is evident to anyone who walks by to see omelettiers — omelette specialists — cooking them up in long-handled copper pots: the open fire. Cedric Navet, chef de cuisine at La Mère Poulard, explains that the omelette is cooked over this very hot flame on just one side until puffy but barely set, then folded only at the last minute, as it's being plated.

11 French Dishes Everyone Should Know How to Cook, According to Chefs

"You can't roll it," he explains. "You would break all of the unctuosity. It would fall and become completely flat."

Either technique can be made or broken by the pan you choose. While Navet uses exclusively copper pans (made specially for the restaurant in the nearby town of Villedieu-les-Poêles) and Rose opts for a stainless steel pan from Mauviel, both Camdeborde and Constant believe that non-stick is the way to go at home.

"Usually, omelettes are made in thin, cast-iron pans," says Camdeborde. "But if the pan isn't consistently used to make omelettes, it'll stick. So it's best to go with non-stick."

If you have the space, Constant even suggests having a dedicated egg pan — one used only to make omelettes and fried eggs — to keep from having to scrape all of your hard work off of the cooking surface.

To master the classic rolled French omelette, low and slow is the name of the game.

"An omelette should not be cooked quickly," cautions Camdeborde. "An overcooked egg translates to bitterness. A perfect French-style omelette should be smooth and white."

He recommends cooking omelettes over a very low flame; your patience will be rewarded.

If the puffy omelette from la Mère Poulard is what you seek, however, the opposite is true.

"Someone cooking at home would have a hard time making our omelette because we really get that flavor of the open fire," cautions Navet. He notes, nevertheless, that it would be possible to get a similar texture by toying with the temperature.

"You start out very hot, and finish very low," he says. "You really need to make a crust from the get-go."

To get this texture at home, start your omelette out in a very hot pan, and watch it closely. After a few minutes, notes Navet, a few bubbles will begin to form, emerging from the foam.

"After three or four," he says, "you know that the crust is at the right temperature and cooked properly."

From there, turn down the heat and allow the omelette to just set, sliding it out of the pan and folding it onto the serving plate.

Timing is the most important ingredient

One of the reasons so few restaurants serve French omelettes today is because of how easily just a few seconds of inattention or delay can ruin the dish.

"When you make an omelette, you can't really be doing two things at the same time," says Rose. "And it must be served immediately."

The importance of timing begins with the breaking and beating of the eggs.

"If you beat the eggs in advance and you let them rest, they'll liquify — they'll become watery," says Camdeborde. "And that watery texture is not compatible with a good omelette."

Only once the pan is hot should the eggs be broken and beaten — and this, to hear Camdeborde tell it, means only until they're just combined. "Beaten but not scrambled," he cautions, will make the most luxurious omelette.

At La Mère Poulard, on the other hand, the puffier omelette is beaten quite a bit longer — at least five minutes, according to one account from David Lebovitz — to achieve the volume necessary for the omelette's unique texture.

High-quality butter and eggs are non-negotiable

Omelettes in France are rarely filled with a laundry list of ingredients like American diner omelets and for good reason: Properly executed technique should be allowed to do all the talking. Rose prefers his omelettes plain, with just a little bit of fleur de sel and a little butter. If he does fill his omelettes, Rose chooses simple fillings like herbs or leftover lobster bits; Camdeborde, meanwhile, fills his seasonal omelettes with mushrooms and truffle.

At La Mère Poulard, while the menu offers several "fillings" including ratatouille, cheese, or salmon, "topping" would perhaps be a more apropos term. Accompanying ingredients come to the table in a small copper saucepan, and, Navet notes, "the flavor of the omelette remains the same, whether there's a filling or not."

One thing is for sure: To truly let the simplicity of the omelette shine, it's essential to start with only the best base ingredients.

"The secret to everything French is always the quality of the ingredients married with the appropriate gest to amplify the best quality of ingredient," says Rose. This means, first and foremost, high-quality butter and eggs.

"When it comes to flavor, the eggs have to be the best," says Camdeborde. "That's the key." 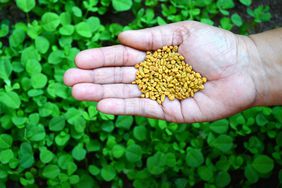