The dinner table is where many of us learn good manners, also known as lying. I doubt that I'm the only one whose early Thanksgivings were full of fulsome, false compliments. "This turkey is so moist! You know, sometimes turkey can be dry, but not this turkey!" Those words were uttered by someone in my family every year, in what became both a solemn ritual and a running joke. The turkey was moist in comparison to particle board. The way to acknowledge this was to insist otherwise. You could praise the food and complain about it at the same time.

On one memorable occasion in the mid-1970s this decorum was breached by my friend Julian, who was visiting from Chicago and who I guess didn't know any better. (Not that I'm judging him.) The subject was not the dry turkey but the suspiciously fluffy and flavorless mashed potatoes. "Are these fake?" he asked loudly. The question provoked my grandmother, who'd prepared them, to declare that Julian was the rudest little boy she'd ever met. She and Julian were both right, of course, but each had violated an unspoken rule: Everyone's potatoes are delicious, just as everyone's children are delightful. That's what Thanksgiving is all about: tactical insincerity in the service of domestic harmony.

But it's also true that everyone is a critic. Our lips may lie, but our taste buds never do. And so the holiday meal can become a paradoxical affair. Home is where we learn to suppress our critical instincts; it's also where we sharpen them. If we can't judge the people closest to us, then whom can we judge? We can tell ourselves that the deeper meaning of Thanksgiving resides in togetherness or football or vague, politically dubious stories about Pilgrims and Indians, but who are we kidding? We assemble to eat, which means that each of us brings to the table our own tastes. Which are always more complicated than we suppose and harder to dissemble.

For the first dozen or so Thanksgivings of my life, our bird was stuffed with something I remember as a quivering pale mass on the edge of my plate. This was a dressing made of white bread and canned oysters, with possibly a shred or two of celery, and maybe the contents of several cans of cream of mushroom soup. It was prepared, like most of the dinner (apart from the instant potatoes), by my grandfather. Subsequent interviews with fellow diners (except for Julian) have confirmed that my negative impression of the stuffing was widely shared. It was awful.

I hasten to add that my grandpa was by no means a bad cook. On the contrary: Though the concept didn't exist at the time, he was something of a foodie. His chili was flavored with spices mail-ordered from Texas. His sausage was homemade. He would only eat corn on the cob the day it was picked. Every November he loaded his Ford station wagon with the biggest freshly killed turkey he could find, a few loaves of Pepperidge Farm bread and a five-pound tub of peanut butter and drove from his home in Ohio to whatever academic backwater my family was living in at the time. My parents cleared out of the kitchen and let him work. I don't remember what the peanut butter was for.

We all loved his turkey and stuffing—or so we said, unanimously—until the day he switched the recipe. The limp gray oysters in their damp pillow of store-bought bread were out, replaced by a concoction of sausage—his own—and homemade corn bread. It was actually delicious, and we made a point of saying so. This time we really meant it! But, of course, we had also made a point of saying so every previous year, which put us in an awkward position.

I think Grandpa knew what was up. With a twinkle in his eye, he said the new stuffing recipe was all right, but maybe next year he'd go back to the oysters, since everyone loved them so much. "No, no! Why?" my aunt and my father cried out in unison, a little too quickly. They tried to backtrack. There was nothing wrong with the old stuffing, it was just that this one was...

Nobody could quite bring themselves to say it. Because if this stuffing was better, then the other one was worse, and a compliment boomeranged into an insult. Criticism, banished from the meal like a rude child, made a sudden return. Turns out it had been hiding under the table the whole time, and now it threatened to spoil everything. Once the critical voice gets going, it's almost impossible to silence. Oh, and by the way, the brussels sprouts are kind of mushy. The cranberry sauce should be tangier. And what about brining the turkey? To be honest, it's kind of dry.

But, of course, some things are better than others. Every child knows that fundamental truth, which is one of the basic axioms of criticism. It's in our nature to compare, to rate, to prefer, to judge. And it's our fate to subject ourselves to the judgments of others. We're all critics, whether we like it or not.

This may seem truer today than in simpler, olden times, when our hearts were purer and our food was worse. There was no shame in fake potatoes. Holiday cooking nowadays has become a more competitive, more authenticity-seeking enterprise. We buy heritage birds and seek out heirloom grains. We try to invigorate tradition with innovation, to fuse novelty and nostalgia.

That nasty oyster stuffing probably had roots deep in 17th-century England, when the plentiful mollusks found their way into all kinds of recipes. It's not hard to imagine an enterprising chef updating Grandpa's recipe using fresh bluepoints and artisanal ciabatta, with dried porcini striking the bosky note once supplied by mushroom soup. Come to think of it, I may even try that myself.

And if I do, everyone will love it, maybe even more than the sausage stuffing that I usually make to honor my grandfather's memory. Less has changed than I might think. Like Grandpa, I put great care into preparing the feast. Like him, I care a lot about what people think of it. And like his turkey, mine is unusually moist. Or so my family tells me. Why would they lie?

A.O. Scott is the author of Better Living Through Criticism: How to Think About Art, Pleasure, Beauty, and Truth. 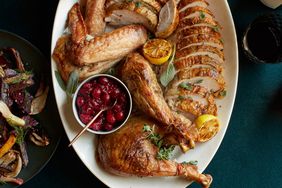 Roasting the Cook, a Thanksgiving Tradition