For Nik Sharma, an iconic Thanksgiving dessert is about the bitter and the sweet.

I didn't grow up here, so Thanksgiving…It's something new for me. It's more of an adopted holiday, and so for me, it's more about being grateful just for everything that I've been given in life and worked for. That pretty much is what Thanksgiving means to me. The Thanksgiving traditions that I now work with or rather bring to my table are the ones based on the things that I've experienced with my family, with my husband's family, they're from the South, they're from Virginia, and so that stuff, and then also with stuff that I've done with my friends.

For the longest time, even though I do have family here, they weren't living close to me, and so I did most of my Thanksgivings with my friends in school or in the cities that I've lived in, and then, of course, with my husband's family, so that changed things. Most of my influences are based on that and living in those cities. Then the largest influence, like I mentioned, was my husband's family, and they're from the South. Sweet potatoes are such a big thing with his family. Thankfully, he likes them too. I love sweet potatoes.

I actually make two sweet potato pies when we used to have guests over. This year, obviously, it's going to be different. The first year when my husband and I were dating and we had friends over to his place for dinner, I made a sweet potato pie, and he loved it so much that he wouldn't give anyone leftovers. In the bedroom, I found that he had actually hidden half of the pie under the bed because I knew for a fact that I had made enough for the number of guests we had, and I was really surprised to find a half a pie hidden under the bed.

After that, I just started working on making twice the number of pies. What I really like about fall and winter is that we move from cooler flavors and temperatures to things that are warmer, and sweet potatoes do that. It also looks warm visually because of that beautiful color that is the pigment that's in there, but also then with the flavors that you choose to pair with it, those are also warmer. Sweet potatoes, as you cook them, they start to get very sweet, and you're also adding other ingredients to it, which makes it sweet. I've found that adding sometimes something bitter can help offset that. In my case, I don't like beer. I do not like bitter things. But when you reduce it and you put it in this context of the sweet potato custard that bakes in the pie, it works really well and offsets a lot of that sweetness, so it doesn't feel monotonous.

Then the other thing with sweet potato is that when it's roasted, not only does it become much more caramel-y, but it also takes up a vanilla flavor or aroma, which I really like. Then, of course, you've got the darker sugars in it, which have the unrefined qualities, which always stand out really well in this situation. It makes it one of my favorite recipes.

The turmeric is less for flavor but more for color. I feel because sometimes, depending on the quality of the sweet potatoes, you might not get that bright, brilliant orange-ish yellow color. If you add turmeric to it, it enhances that effect, completely different pigments, but similar results. That's kind of where science comes in, where I'm just tweaking it a little bit to amplify the color.

We've got all these warm flavors. I also want to have sometimes a little bit of something cool but also heavily scented. In this case, the cardamom brings that. Not only does it counterbalance the warmth, but it also adds a beautiful aroma, which works really well in this situation.

Everybody likes something pretty at the table. Sometimes, I feel with Thanksgiving sometimes, having suffered through the whole preparation stage, it can be exhausting. If you have a tart pan, it already provides those edges, the fluted edges, so it looks pretty. One of the things that I do in this particular recipe is that I control the temperatures at which the custard is made, and it goes into the oven. I've been making this particular formula for sweet potato pie recipe for so many years that it never cracks in the middle. My husband will definitely ask me a week in advance if I'm making my sweet potato tart, to the point where I'm just like, "You know what? I don't want you to ask me anymore about this. It's there. It's happening. Let's move on.

Nik Sharma is a cookbook author and food photographer. His newest cookbook, The Flavor Equation, is out now. 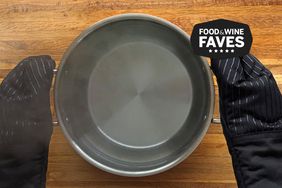