Justin Chapple whips up the quick treats on this week’s episode of Mad Genius: Home Edition.

Eating matzo, an unleavened bread, is a tradition during Passover. And in this week's episode of Mad Genius: Home Edition, our Culinary Director-at-Large Justin Chapple demonstrates how to transform it into three easy tartines. Two are savory and one is sweet—all of them come together in mere minutes, and many of the ingredients are ones you might already have in your pantry. Read on to find out how to make them and follow along with the video above.

First up is the Everything Bagel tartine, which Justin calls "the hero of them all." You start by piping whipped cream cheese on top of the matzo so the surface is covered, and then pile on your toppings. Justin uses classic bagel accoutrements: sliced red onion, capers, and thinly sliced cucumber. As for the "everything" bagel component? Everything bagel seasoning is key.

"This is genius," he says after taking a bite. "This is Mad Genius."

Next up is the Smoked Trout, Beet and Radish tartine. Take some mayonnaise and mix it with fresh lemon juice, fresh chives, and horseradish, with a little salt and pepper for seasoning. Spread the mixture on the matzo square, and then, add sliced pickled beets, smoked trout, thinly sliced radishes, and more chives to top it all off.

"The toppings on this tartine are definitely some of the most underappreciated supermarket ingredients," Justin says. "Smoked trout and steamed pickled beets are two of my secret weapons. I keep them on hand at all times for recipes just like this."

For his final tartine, Justin takes the dessert route. Almond butter goes on the matzo as a base, and then, he layers on some Granny Smith apple slices he cut "super-duper thin" with a mandoline. Finally, a drizzle of honey and some shaved chocolate add sweetness.

"When I was a kid, I would eat saltines with peanut butter and apple," he says. "This is like the more sophisticated version of that. Really good."

For more Passover ideas, check out our guide to cooking a pared-down Passover Seder, and roundup of Passover dessert recipes. 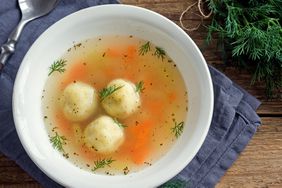