What Did Jesus and the Apostles Eat at the Last Supper?

Scripture and art give us a number of clues.

Over the years, many classic meals have been depicted in art and film, but Leonardo Da Vinci's The Last Supper might just be the most famous. While many continue to investigate the painting's religious symbolism and value as art, others are looking at the famous mural for clues about something else: What were Jesus and his apostles eating?

There are a number of theories regarding the circumstances surrounding the Last Supper, an event that Christians now celebrate on Maundy Thursday, but there are a few things we can agree on: Attendees drank wine and ate unleavened bread, but the Last Supper was not a traditional Passover Seder. Other details are a bit murkey, but here are our best guesses about what was (and wasn't) eaten at the Last Supper.

Wine and bread, of course

According to Christian scripture, the practice of taking Communion originated at the Last Supper. Jesus is said to have passed unleavened bread and wine around the table and explained to his Apostles that the bread represented his body and the wine his blood.

Deuteronomy describes Jesus's homeland as "a land of olive oil and honey; a land in which you will eat bread without scarcity." Common crops included grapes, figs and pomegranates. However, these foods probably wouldn't have been available fresh in early spring. The dinner certainly could have included dried figs, as well as staples like olive oil and honey.

In 2007, Pope Benedict XV announced that there would have been no lamb served at the Last Supper. The then-pope theorized that the Last Supper took place before the ritual sacrifice of the lambs, which was a common Passover tradition in Jesus's time, and therefore it was Jesus himself who took the lambs' place.

While the Last Supper occurred just prior to Passover itself, that doesn't mean that Jesus and the Apostoles weren't enjoying a few Passover dishes. According to a 2015 report by a group of Italian archaeologists, a number of typical Seder dishes made appearances at the Last Supper including bitter herbs with pistachios and a date charoset. Other dishes, like cholent, a stewed dish of beans cooked very low and slow, and olives with hyssop, a mint-like herb, were commonly eaten on a daily basis and might have appeared at the Last Supper.

Not eels and orange slices, although they appear in the painting

After the painting's most recent restoration, which took 21 years and ended in the late '90s, additional dishes appeared on the table for the first time, including one that seemed a bit out of place—eels with orange slices. While this certainly wasn't a common dish in Jesus' time, eels and oranges were a common pairing in 15th-century Italy and were two items that appeared on Da Vinci's own preserved grocery lists. 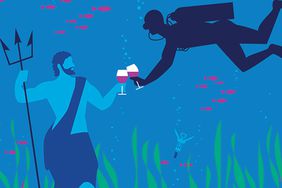